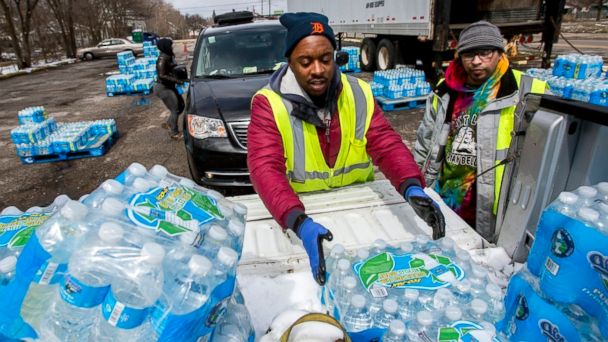 Officials in Flint, Michigan, are criticizing the state for ending its bottled water distribution program as the city continues to recover from a lead-contaminated water crisis.

The move sparked swift backlash from the city's mayor, Karen Weaver, who said the city is still recovering from the crisis that left residents with dangerous levels of lead in their tap water.

"We did not cause the manmade water disaster," Weaver, a Democrat, said, "therefore adequate resources should continue being provided until the problem is fixed and all the lead and galvanized pipes have been replaced."

Weaver said the state should supply free bottled water until all the city's lead pipes are replaced.

Weaver, who said she heard about the decision only moments before it was made public, said she planned to contact the governor "to express the insensitivity of the decision" and to make him aware of the city's "additional needs."

"We have not received clear steps as to how the remaining lead in Flint schools will be remediated or how ongoing monitoring will continue for our most vulnerable populations," Pugh said in a statement. "Additionally, the medical community has continuously raised questions as to how special populations, including nursing and bottle-feeding mothers, will receive bottled water while massive pipe replacement work is ongoing.

"There are still questions that remain," Pugh added.

In Flint, elevated levels of lead were found in the city's water supply after the city disconnected from Detroit's water line as a cost-cutting measure and began drawing water from the Flint River in April 2014.

Snyder said the state had provided more than $350 million to Flint, in addition to $100 million in federal aid, to improve the water quality in Flint.

"Data has shown Flint's water is testing the same as or better than similar cities across the state," Snyder in a tweet on Friday. "We have worked diligently to restore the water quality & scientific data now proves the water system is stable and the need for bottled water has ended."

Snyder said "ensuring the quality of the water in Flint and helping the people and the city move forward" is a top priority for him and his team, but State Sen. Jim Ananich, a Democrat from Flint, said he questions the administration's honesty.

"It's beyond belief that the governor expects the folks in Flint to trust the government now, when they lied to our faces about lead in our water just a few years ago," Ananich said in a statement. "That trust was broken, and families in Flint still don't feel that the water in their homes is safe to drink.