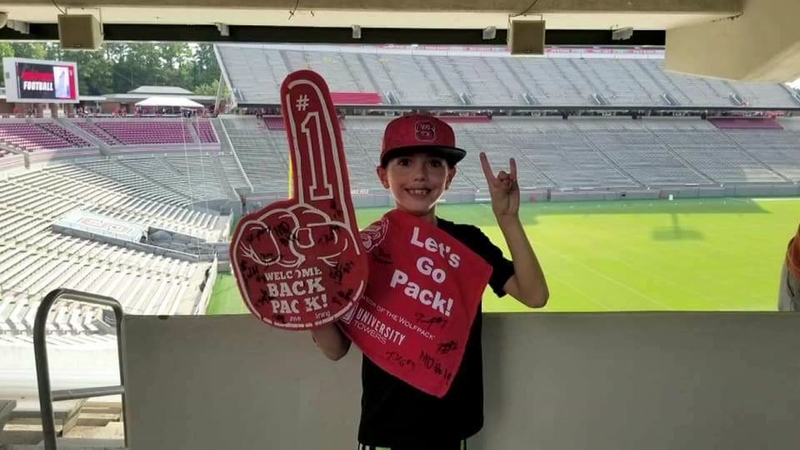 RALEIGH, N.C. (WTVD) -- An N.C. State student volunteer working a basketball game found a foam finger belonging to an 8-year old fan, and the school is now working to return it directly to the family.

The student said he saw the foam finger under the seats following the Wolfpack's game Tuesday night against St. Peter's. He asked others around the area if they knew who it belonged to, and did not know where the stadium's Lost & Found was located.

Seeing the autographs on the foam finger, he said he realized its importance, and passed it to somebody with the organization knowing it would be turned in during Saturday's game.

"I just wanted to do what I would hope someone would do for me if they found something I had left behind. Something I would think any member of the Wolfpack would do," the student volunteer, who wished to remain anonymous, told ABC 11.

His favorite part of the game? "Where they win or lose ... and all the snacks," he replied.

The Wolfpack took care of the former, defeating St. Peter's 85-57 behind a huge first half.

Just as his night was set to wrap up, he realized he was missing his beloved foam finger.

"His aunt first gave that to him when he was 2 years old and she was a student at NC State. She's since graduated and moved to Scotland, and the two are very close," said Emily Drain, Jacob's mother.

They began searching around the seats and places they stopped throughout the night. After learning of the news, Drain said Jacob was hysterical.

A member of the guest relations team assisted the family, setting up a special meet-and-greet for Jacob with two Wolfpack players.

"That was extremely helpful. It didn't fix the entire situation, but at least it did show there are good people trying to help him," Drain said.

After a family member posted about the incident online, a fan reached out and offered Jacob their extra foam finger.

Saturday night, an N.C. State official told ABC11 that they are in direct contact with Jacob's family, and are working to return the item.