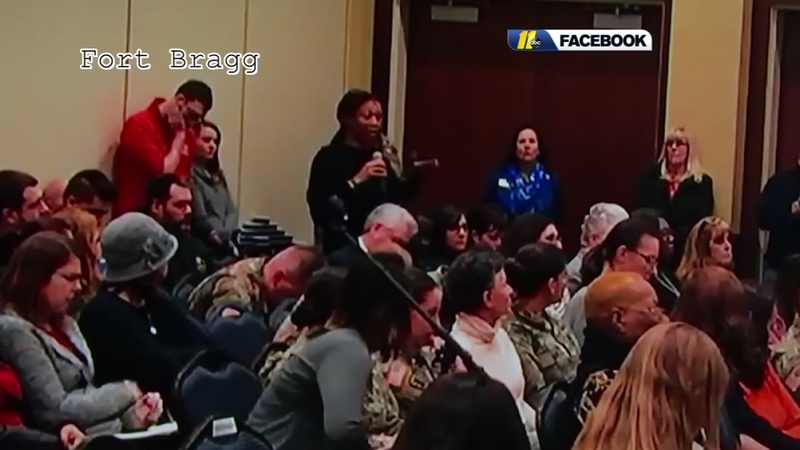 Media wasn't invited inside, but Fort Bragg streamed the talks on Facebook Live.

"Step one is they deceive. Rather than clean or properly repair problems between tenants, they paint or caulk over mold," one woman said.

Last month, ABC11 met with one Fort Bragg mom who showed us photos of the problems inside her home. She claimed mold caused her and her kids to get sick and that the fixes weren't done properly. Other families shared similar concerns.

"Why do we have to call corporate before a job is done correctly? A job that they are contracted and paid to do," said one woman.

Tim Tooey from Corvias corporate had an answer and an apology.

"I'm personally appalled with what I've seen and what I've heard," Tooey said. "I want to apologize on behalf of myself and Corvias for the experiences that many of you have had,"

Corvias says that apology has been met with action. Three top employees on Fort Bragg are off the job and leaders plan to hire quality-control managers to make sure things are getting done. Leaders also announced a new work-order-tracking system.
"We've been making changes but we have a lot of work to do," said Col. Kyle Reed, Fort Bragg Garrison Commander.

Fort Bragg said families should continue to hold Corvias accountable by reporting issues and going up the chain of command, but one mom said that has started to backfire.

"My husband is not here because he was told it would be in his best interest not to be," she explained.

Col. Reed condemned any type of intimidation, offering to call the woman's husband personally to request that he attend.

Many of the housing issues aren't necessarily maintenance related.