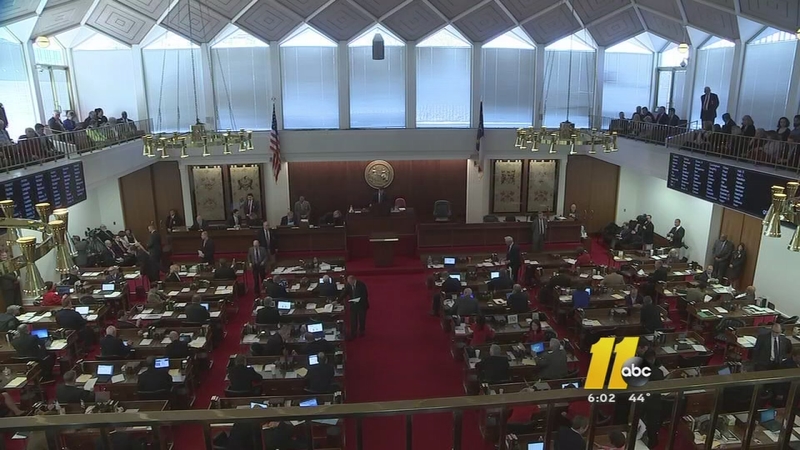 Senate leader Phil Berger filed a bill Wednesday morning that would allow magistrates to opt-out of same-sex weddings and allow assistant and deputy registers of deeds to not issue licenses based on "sincerely held religious objections."

"I had, in my county, a situation where a magistrate felt like he had to resign in order to honor his religious beliefs," Berger said, defending the bill. "A lot of folks, including myself, feel that shouldn't be the case and that extending the rights of some should not infringe on the long held beliefs of others."

But Democratic lawmakers and advocates with the gay-rights group Equality NC called that "discrimination in disguise."

"In North Carolina, gay marriage is legal and the magistrates who have sworn to administer these laws must do so equally and for everyone," said Jackson.

Meantime, in the North Carolina House of Representatives, another potential bill was discussed that critics also worry would restrict gay rights. Rep. Paul Stam, a Republican from Apex, said he would file a separate "religious freedom" bill later in the year.

Stam said it would be similar to a federal measure requiring the government to show "a compelling interest" before a law could provide a significant obstacle for a citizen with strong religious beliefs to carry out.

The specter of such a bill concerned critics as much as the bill filed in the Senate.

"Broad religious refusals could mean a hotel owner who objects to co-habitation outside of marriage could refuse to provide a room to unmarried couple," said Equality NC spokesman Chris Sgro. "A landlord who believes a man should be the head of household could refuse to rent an apartment to a single mother, a guidance counselor could refuse to help a gay teenager by saying it goes against her religious beliefs, a restaurant owner could refuse to serve gay customers, and so on."

The U.S. Supreme Court is expected to weigh in this year on similar bans in other states as judges have thrown them out in a flurry of recent rulings.