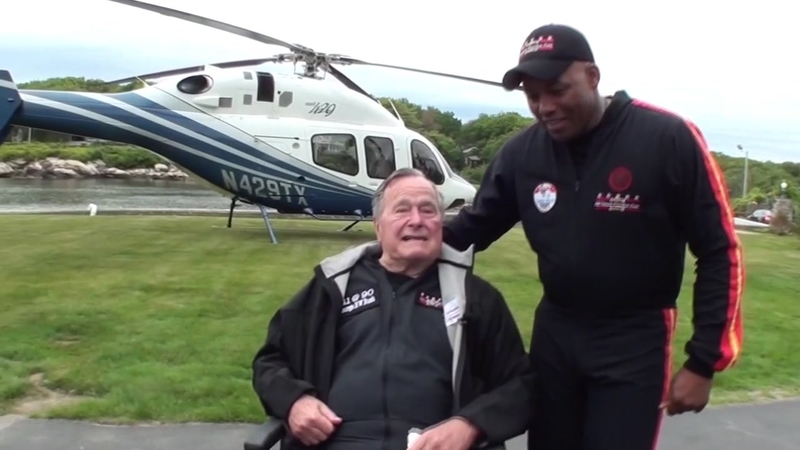 As the nation honors and remembers President George H.W. Bush, it's hard to forget the images of him skydiving for a few special occasions, including the rededication of the Bush library in College Station and his 85th and 90th birthdays.

There is only one person who went along for those presidential skydives, Retired Sgt. 1st Class Mike Elliott, a former member of the Army's Golden Knights Parachute Team who lives in Raeford, N.C.

"When you get that task that you're going to strap a former President to you and fall out of an airplane at 12,000 feet, it's quite an arduous task," Elliott said. "But, I was honored to get the mission."

Elliott was with the Army Parachute Team as the tandem team commander when he was chosen for the mission to skydive with the president. The first jump was a secret mission.

The day before the jump, Bush informed everyone about his intentions including his wife who Elliott says had to sign off.

"Each time it was in her hands," Elliott said. "The first time I met her it was in College Station, Texas and she walked up to me and said, 'if you hurt him, I will kill you,'" Elliott laughed. "And, I think she probably would have,"

The two formed a special bond after their first skydive.

"I received numerous letters from him," Elliott said. "Most start off, 'to say you and I have a close relationship would be an understatement and thank you for taking care of me, thank you for making me feel young again.'"

"When my son was born he wrote a letter to my son and it started off, 'welcome to this great new world!'" Elliott said. "So, to me, it's quite an honor and it tells you what kind of person 41 is and will continue to be in our history."
Elliott was asked to take Bush for his 80th birthday jump and again for his 90th -- a jump Mrs. Bush almost did not approve of until the last minute.

"I'll never forget being there for his 90th birthday jump. He asked myself and one of my teammates to come for dinner and we had dinner with him, Mrs. Bush and his grandson George Jr."

"So, we're sitting there having a vodka cocktail with a former president and he's talking about being shot down over Japan. It's one of those moments where you pinch yourself and it's like -- am I here this little kid from Raeford, North Carolina, here having a cocktail with a former president that I'm going to throw out of an airplane the next day? It's one of those moments where you really say, America is a great place if you just open your arms and your mind to it, it is amazing what you can accomplish."

Elliott says skydiving with Bush were highlights of his life and moments he will never forget.