Fayetteville urges residents not to attend half marathon 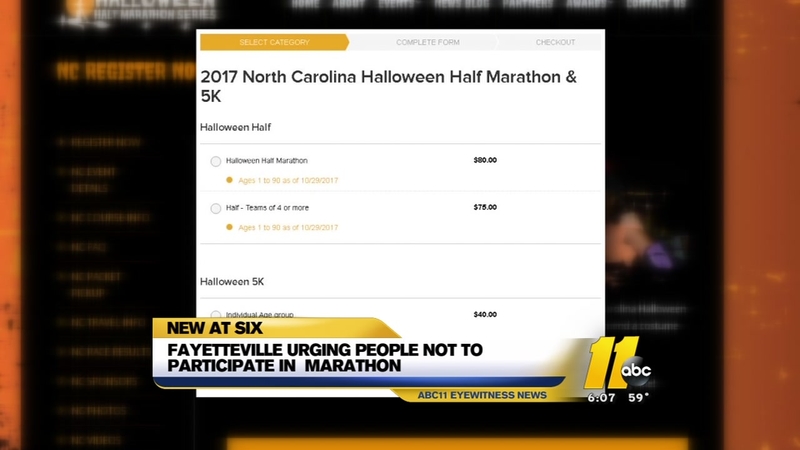 FAYETTEVILLE, North Carolina (WTVD) -- Most cities are happy to promote events happening in their area, such as festivals, concerts and sporting events.

But the City of Fayetteville is taking the unusual step of publicly denouncing such an event - the North Carolina Halloween Half Marathon & 5K.

The reason? The running event, which is being promoted as taking place October 29, does not have proper permits.

"Residents are encouraged not to register or to show up since the event is unlawful and thus should not take place," the city said Wednesday in a release. "Necessary approvals from the City of Fayetteville and from the North Carolina Department of Transportation have not been obtained."

The Halloween Half Marathon Series is a series of four events, according to its website, with races (with many participants wearing costumes) in Petersburg, Virginia, as well as Fayetteville, Atlanta and Miami Beach, where the idea got its start.

All public events in the city limits of Fayetteville are required to register for permits, a spokesman for the city said.

On Thursday. the city released a statement saying:

"The Halloween Half Marathon and 5K being planned for the Crown Coliseum is not a City-permitted event. The event request was denied, because among other reasons, the organizer began advertising and collecting money for the event prior to it being reviewed and approved by the Special Events Committee. Without a City permit, the Police and Sheriff Departments cannot support the event. The organizer has also not obtained the required permit from the Department of Transportation. We are concerned for the safety of participants without the proper traffic control measures in place during these races."
Report a correction or typo
Related topics:
arts & entertainmentcumberland countyfayettevillehalloweenmarathonsfayetteville newseventscumberland county news
Copyright © 2022 WTVD-TV. All Rights Reserved.
TOP STORIES
OBX beach goers urged to wear shoes on beach
Onlookers urged police to charge into TX school: 'Go in there!'
RDU adds new airline, another adding several new routes
Columbine survivor reacts to Texas elementary school shooting.
Should you talk to young kids about mass shootings? And how?
Fort Bragg soldier killed in Afghanistan to be honored
Timeline breaks down Uvalde shooter's movements day of massacre
Show More
Hurricanes look to take series lead against Rangers in game 5
In video, 'angry' NC Gov. Cooper pushes for stronger gun laws
TX school shooting leaves at least 19 children, 2 adults dead
Person County Habitat for Humanity looking for volunteers
Wake County educator weighs in on gravity of another school shooting
More TOP STORIES News