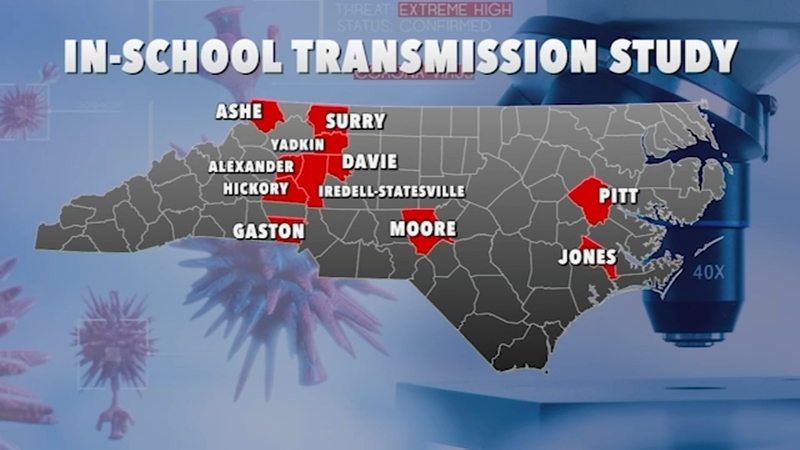 DURHAM, N.C. (WTVD) -- A report of 11 North Carolina school districts from the beginning of the school year, compiled by a team of researchers at Duke and UNC, found a very low rate of in-school transmission.

"As the community rates took off, their plans and procedures were in place and they toed the line. And the differences were really outstanding, and in fact, the worse things get in the community paradoxically the greater the advantage to be in a high compliance area like a school," said Dr. Daniel Benjamin, a Duke School of Medicine Professor Pediatrics and the lead author of the report.

The study took place from August 15 to October 23.

It found, "Over 9 weeks, 11 participating school districts had more than 90,000 students and staff attend school in-person; of these, there were 773 community-acquired SARS-CoV-2 infections documented by molecular testing. Through contact tracing, NC health department staff determined an additional 32 infections were acquired within schools. No instances of child-to-adult transmission of SARS-CoV-2 were reported within schools."

The study primarily focused on hybrid instruction, a combination of in-person and remote learning.

"There's not a medical reason to stay out of Plan B. Really, do you have the leadership in place where you're going to get these protocols together, you're going to execute on them," said Dr. Benjamin, who credited the superintendents in the 11 participating districts.

Gov. Roy Cooper has given individual school districts the power to make re-opening decisions, leading to scattered decisions statewide. For example, while Wake County Public Schools plan to return some students the classroom next week, Durham Public Schools will remain fully online through the end of the school year.

"The board's decision was to remain in remote/online learning through the end of the year. While the board may always revisit a decision, the conversation at the board table was about providing certainty to our families for the rest of the year.

If we were to reopen to in-person learning, we would continue to provide an online-only option for students and educators. If that were the case, there would be no way to guarantee that students would remain with the same teacher, as some teachers would be needed for either online or in-person learning, and families might make different choices from their child's teacher."

Most school advocates agree that in-person instruction is more effective than remote, though that is just one of the factors districts must take into account when making re-opening decisions.

"The COVID transmission numbers, the infection rates, the positivity rates, the community spread are all worse today than when we shut schools down last spring. They're worse today than when we suspended in-person instruction in December. So on one hand you look at it and say, 'well why are we going back.' But at the same time, there is obviously a recognition that in-person instruction is best for students and if we can do it safely - and it's also having children we know puts a burden on families, and working parents. So I think they're really trying to balance things," said Keith Poston, the president of WakeEd Partnership.

COVID-19 metrics have significantly worsened since the beginning of December, and state health officials remain concerned the trend could continue in the near-future stemming from recent holiday travel.

Benjamin explained that reports from superintendents in the 11 districts showed extremely high compliance of masking and steps to enhance safety, and he added that even reports of a variant, more highly contagious strain of COVID should not have a marked impact on the ability of schools to function.

"So although the transmissibility of the (new strain) is probably higher than the current variant, there's not evidence that it breaks through a cloth mask any easier. So the way we're interpreting this at the moment is it's all the more important to be adherent to masking," Dr. Benjamin said.

"If we're careful and focused on taking care of each other and doing the right thing both out of school but within our own families, there's some light at the end of the tunnel," Poston said.

Benjamin said districts continue to get data from the districts.

"They continue to learn from the secondary transmissions that they have, which is really the power of (collaboration)," Benjamin said, using the example of coming up with how to eat in schools after a cluster was reported.
Report a correction or typo
Related topics:
health & fitnesschapel hilldurhamncchildren's healthschoolsunccoronavirusduke universitystudyresearchonline learningcovid 19
Copyright © 2021 WTVD-TV. All Rights Reserved.
TOP STORIES
Fauci: CDC may back wearing face masks more
2 killed in double shooting on I-85 entrance ramp ID'd
WEATHER: Warm and humid today with an end-of-the-week warm up!
Americans' optimism about US direction drops since May: POLL
21-year-old motorcyclist killed in crash in Fayetteville around 1 a.m.
Cary native Claire Curzan won't go to Olympic Finals
Show More
Russians top Simone Biles, Americans in gymnastics qualifying
Grieving the loss of a pet? There's a support hotline to help
Expert: USC student's DNA found under suspect's nails
Motorcyclist killed, teen airlifted in 4-vehicle crash in Fayetteville
Hero officers, bystanders save mom, baby pinned under car: video
More TOP STORIES News