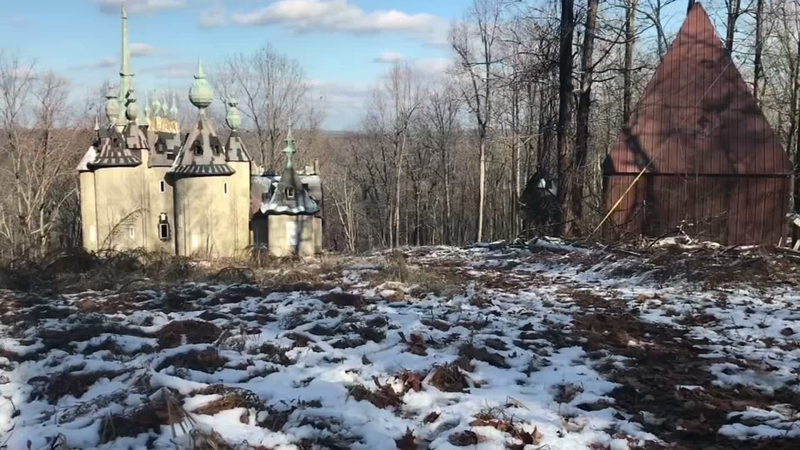 ROUGEMONT (WTVD) -- As Robert Mihaly walked up a spiral staircase and arrives on the second story landing, he looks around at the trash and deteriorating shell of a house that surrounds him.

There's nothing but wood floorboards beneath his feet. The cold December air is breathing its way inside. There are window frames, but no glass to ward off the temperatures. Nearly every window is broken.

Mihaly abandoned the property 10 years ago. The house shows its age and neglect.

In spite of it being in ruins, Mihaly is returning to the property and intends on finishing the project.

"I've put it in the back of my mind for a decade and didn't even think about it and certainly had no motivation. But I've turned the corner," he said while still looking around.

It's a dramatic home that offers a taste of Russia in Rougemont. There are turrets. Pinnacles and spires pierce through the sky.

The home is one example of his skills.

Mihaly is an artist and sculptor. His patrons include the Washington National Cathedral, the United States Postal Service, Duke University, and East Carolina University.

Presidential candidate and Raleigh lawyer John Edwards commissioned Mihaly to carve an 8-foot monument to honor his late wife, Elizabeth, after she passed away from cancer.

"(As with) any kind of artist, you make projects and have things that you push to the side in the corners that maybe you'll get back to at some point. The castle project for me has been one of those things," he said.

The house sits on the rolling slopes of Red Mountain. Arriving at the home requires you drive almost a mile up a winding, dirt road littered with potholes.

"It was first a forest and then I moved a bunch of the mountainside away to reshape it a little," he said.

There is a wiring fence guarding the property. The Person County Sheriff's Office has nailed several signs along the fence warning visitors they are not allowed to trespass and the land is under 24-hour surveillance.

He says part of his inspiration for the castle was Antoni Gaudi, a Spanish architect who created ornate buildings and the Sagrada Familia basilica in Barcelona.

The design was also influenced by fairytale books.

Vandals have ravaged the house and left their own artistic stamp. There's bright graffiti spray-painted on most of the walls.

Mother Nature's fury has helped with deterioration. Clay roof tiles have fallen off. Paint is chipped off the pinnacles, which appears to, at one-time, have been a brilliant turquoise.

Mihaly says of the damage, "Over the period of years, it was pretty distressing to me."

Now a father of two, his motivation to finish the project is to provide some whimsy to his children's lives. Mihaly plans on completing the fantasy by installing a moat.

"I feel like I can't deny them a fairytale castle in their childhood, so the clock is ticking. It's time for me to make to happen," he said. "It's a whole lot of work, but I'm motivated."