Hoke County sits at bottom of vaccination rates in the state 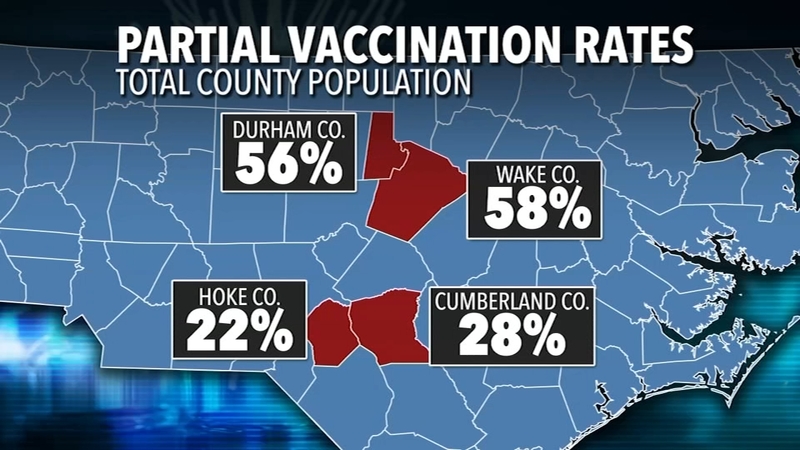 Hoke County sits at bottom of vaccination rates in the state

The latest North Carolina Department of Health and Human Services data reveals that only 22 percent of Hoke County residents are partially vaccinated.

When you break the number down to the demographics, here's what it shows for partial vaccinations:


At the larger scale, Wake and Durham County are leaps and bounds ahead of Hoke County with 58 percent and 56 percent partially vaccinated in those respective areas. Meanwhile, in the Sandhills, Cumberland County is much closer to Hoke County at 28 percent.

The numbers a bit of a shocker to new Hoke County resident Virginia Swinson, "it seems like people are more adverse to it. Not quite sure why. Just, I don't know, it's kind of unfortunate."

Swinson completed her rounds of the Pfizer vaccine in April. She was working at a fast-food restaurant and "it just seemed like the smartest, safest thing to do."

On the other hand, Belinda Jackson, a long-time Hoke County resident, tells me she worries about COVID-19 but doesn't have enough faith in the vaccines.

Eyewitness News asked Jackson what her worries were. She responded by saying, "what kind of side effects it might have."

Though that data isn't lying, Dr. Wells says there are other variables that impacting the county's numbers.

"I do believe that we need to really look at the military and veteran population," Wells noted.

Wells says the county has a large population of veterans and military members from Fort Bragg. The hospital system and county health department don't have access to those vaccination numbers.

"It would be interesting to collect that data," Wells said, adding she believes the real rate, if you include veterans and military members, would be much higher.

Regardless, Wells and other health officials know they're a long way from their desired 70 percent mark. Wells tells Eyewitness News she believes the county could reach 50 percent in the next few months.