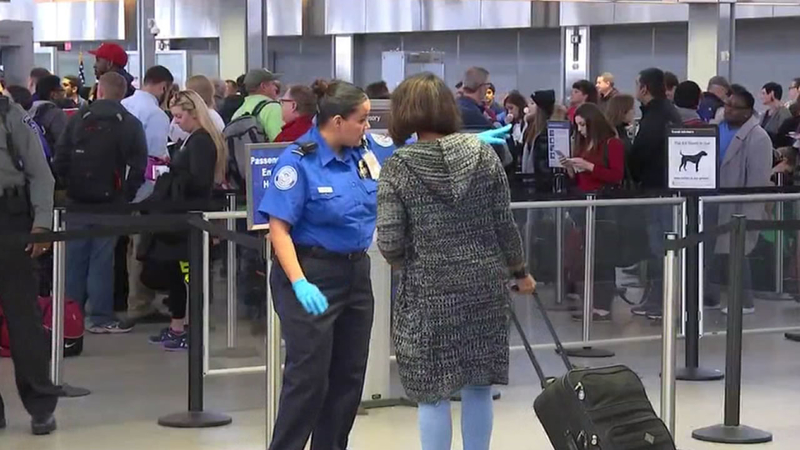 RALEIGH (WTVD) -- The most Americans since 2007 are expected to travel over the long holiday weekend. Nearly 47 million will travel 50 miles or more.

Representatives with the Raleigh-Durham International Airport are expecting more people to come through the airport than last year, at more than 265,000 between now and Monday. On the roads, AAA reports more than 1.2 million people will drive to their Thanksgiving destinations in North Carolina.

Wednesday night travel in the Triangle saw its own holiday driving issues with a major traffic jam at I-40 and the Durham Freeway.

At RDU, travelers were reminded of the heightened security when they saw TSA dogs roaming the airport with agents. The increased security comes on the heels of a travel alert issued after worldwide terror threats since the attacks in Paris.

"We saw it on the news and everything, so we planned ahead," said Brian Mountain, who is traveling to Boston with his wife and baby girl, Katherine.

Mountain said they arrived to airport early worried the extra security would slow things down. But even with the airport expecting as many as 30,000 a day, some say the crowds were better than they had expected.

"I'm thrilled today, because it's delightful, it is delightful!" said Wilberforc Mundia, who was getting ready for his flight to Providence.

For the most part flights at RDU were on time, but there were a few cancellations in and out of LaGuardia in the evening.

If you're planning to fly out of RDU Thanksgiving morning, be aware that the Park and Ride 3 is already full and closed. Instead, they suggest using the Park and Ride 4 at I-540, U.S. 70 and Lumley or daily garage parking.