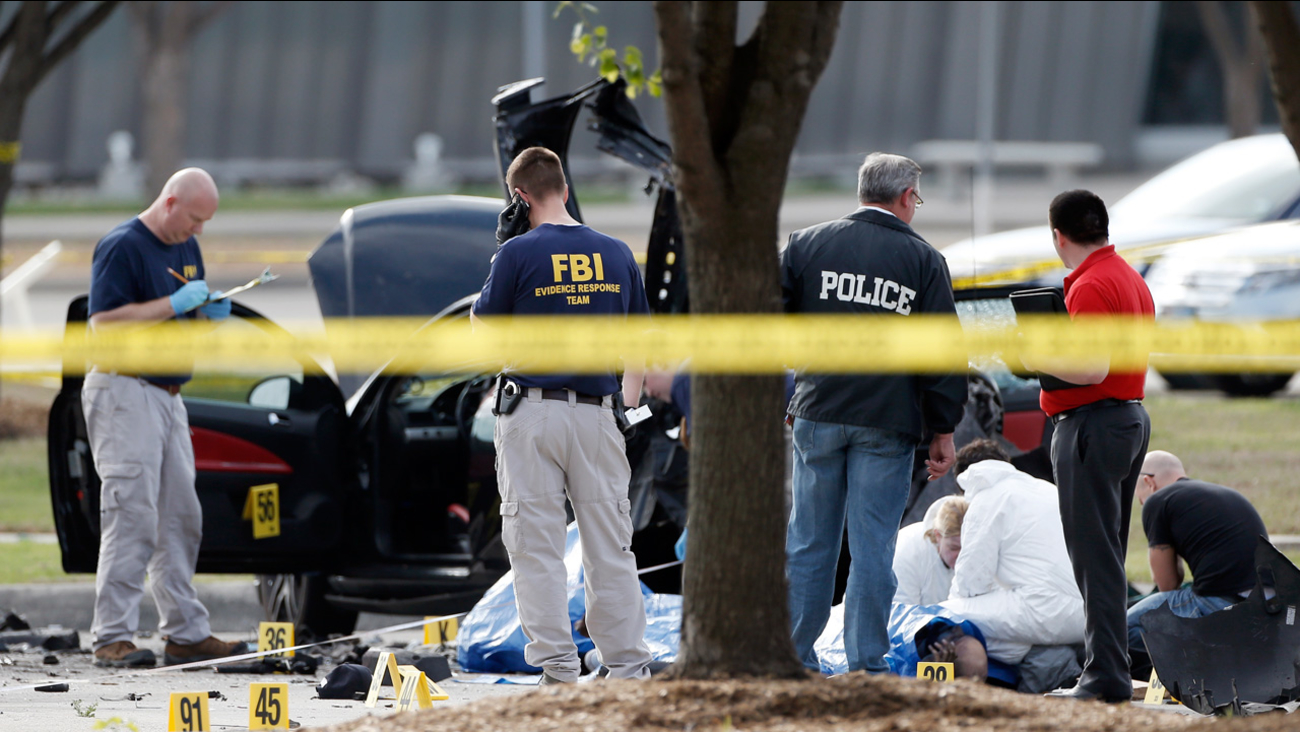 FBI crime scene investigators document the area around two deceased gunmen and their vehicle outside the Curtis Culwell Center in Garland, Texas, Monday, May 4, 2015. (Brandon Wade)

CAIRO -- The Islamic State group claimed responsibility on Tuesday for a weekend attack at a center near Dallas, Texas, exhibiting cartoon depictions of the Prophet Muhammad.

An audio statement on the extremist group's Al Bayan radio station said that "two soldiers of the caliphate" carried out Sunday's attack and promised to deliver more in the future.

The statement did not provide details and it was unclear whether the group was opportunistically claiming the attack as its own. It was the first time the Islamic State, which frequently calls for attacks against the West, had claimed responsibility for one in the United States.

Two suspects in Sunday's attack in the Dallas suburb of Garland were shot dead after opening fire at a security guard outside the center.

It was unclear whether the group, which has captured large swaths of territory in Syria and Iraq, had an actual hand in the operation, or whether the two suspects had pledged allegiance to the group and then carried out the attack on their own.

The suspects have been identified by officials as Elton Simpson and Nadir Soofi. They opened fire in on an unarmed security officer stationed outside the contest center featuring cartoons of the Muslim Prophet Muhammad.

According to mainstream Islamic tradition, any physical depiction of the Prophet Muhammad - even a respectful one - is considered blasphemous, and drawings similar to those featured at the Texas event have sparked violence around the world.

The IS statement was read on the Al Bayan radio, which is based in the Syrian city of Raqqa, the group has proclaimed the capital of its self-styled caliphate.

"We tell ... America that what is coming will be more grievous and more bitter and you will see from the soldiers of the Caliphate what will harm you, God willing," it said.

There have been numerous attack in Western countries believed related in some way to the group, which holds roughly a third of Iraq and Syria.

In October, Canada was hit by two terror attacks by so-called "lone wolves" believed to have been inspired by the Islamic State group. In Ottawa, a gunman shot and killed a soldier at Canada's National War Memorial and then stormed Parliament before being gunned down. Two days earlier, a man ran over two soldiers in a parking lot in Quebec, killing one and injuring the other before being shot to death by police.