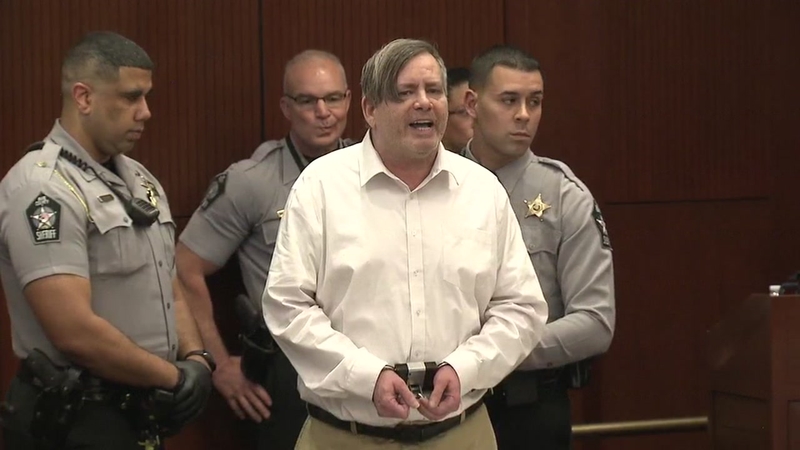 Sander sentenced to life in prison

RALEIGH, N.C. (WTVD) -- Jurors came to a consensus Monday for what they think should be the punishment for Jonathan Sander, the man convicted of killing his three neighbors in March 2016.

The jury recommended Sander be sentenced to life in prison without parole on all three counts.

Then things got emotional -- and dramatic -- as victims' families read victim-impact statements and Sander responded with a fiery, rambling retort..

Sander was convicted on April 8 of first-degree murder in the shotgun slayings of Sandy Mazzella, his wife Stephenie Mazzella, and Sandy's mother Elaine Mazzella. Since then, jurors have heard more evidence before making a suggestion to the judge about what Sander's sentence will be.

After a brief recess, victim's statements were read.

Sal Mazzella, the father of Sandy and husband of Elaine, stood and read an emotional two-page statement. He thanked the judge and everyone else who supported him.

"I used to tell my wife, Elaine, that hate should be taken out of the dictionary," Sal Mazzella said, getting emotional. "My dear wife, Elaine, was a loving, caring person."

"My son, Sandy, cared about people. My son never expressed hate," he continued. " I still cannot understand why you hated my son so much. It baffles me."

In response, Sander mockingly clapped his hands at Sal's remarks.

A statement written by Karen Maggio, Stephenie's mother, was also read. Because of illness, Maggio was not able to attend.

"My daughter would protect those she loved at any cost," Maggio's statement said. "She was full of life with her happy smile all the time ... loving, thoughtful, caring, lifting in so many ways. It is very difficult for me to grasp that I will never be able to talk to her or with her, or hug her again. I miss her every day, every hour, and every minute. my heart cries for her."

"Was what you did really worth the consequences?" he asked. "You have killed my family and your don't even get to see your kids anymore."

One of Stephenie's friends also read a statement, and spoke of her generosity, kindness and friendship.

"I absolutely hate what you did," the friend said, addressing Sander. "You turned families upside down."

After Sal Mazzella spoke, Sander got his turn to speak and unleashed such an emotional torrent on the courtroom, the Mazzella family walked out.

"I appreciate the time to tell the truth, and set the record straight," Sander began. He got more emotional the more he spoke. "I would like to thank you for not sentencing me to death, but even if you did ... what's about to happen here is going to change that."

He fired accusations at the Mazzellas, alleging there were drug problems, lies, and romantic overtures directed at him.

He later began to attack his own attorney, questioning the defense he provided.

"Your actions were selfish and they were cowardly," Judge Shirley said after finally cutting Sander off. "You destroyed their family and your family."

"He had delighted in your celebrity," the judge said in a remarkable rebuke. "Come Monday, these people watching this stream are going to be watching something else. You won't even be a footnote."

Judge Shirley then sentenced Sander to life in prison without the possibility of parole for each murder.

"You will die alone, and you will die forgotten," Judge Shirley then told Sander. "Now get him out of my courtroom."

See stories below for a look back at Sander's trial:
Monday, March 25: Sander has to be escorted out of the courtroom following a dramatic outburst.
Tuesday, March 26: Jurors heard 911 calls from the night of the murders
Wednesday, March 27: Dashcam audio recorded Sander saying he was 'a dead man' shortly after the murders
Thursday, March 28: Jurors see gruesome but critical evidence in the case
Friday, March 29: Tears fell as witnesses and friends testified about the victims of the murders
Monday, April 1, childhood trauma experts testified that Mazzellas' daughter, who was 14 at the time of the killings and is now 17, reported in the days before the crime that Sander had molested her. The experts said the daughter had been diagnosed with post-traumatic stress disorder (PTSD).
Tuesday, April 2, a bevy of witnesses testified about Sander's drinking habits, relationship with the victims, and his actions the days before the murders.
Wednesday, April 3, prosecutors unleashed their strongest piece of evidence yet: Sander himself confessing to the murders.
Thursday, April 4, prosecutors finished playing Sander's confession tape and wrapped up their case; Sander's defense team started calling witnesses
Friday, April 5, Sander's defense team called several witnesses--including Sander's wife--to speak to Sander's state of mind at the time of the murders.Sander himself did not testify as was previously thought.
Monday, April 8, Sander is found guilty of first-degree murder for each of his slain neighbors