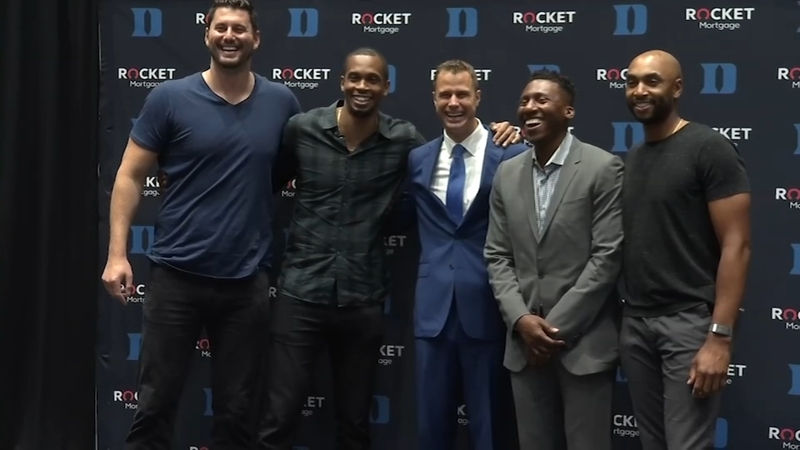 DURHAM, N.C. (WTVD) -- Jon Scheyer, who will take over from Coach K in April of 2022, acknowledged that Coach K is one of one and that nobody can take his spot.

There is something that will help guide him through this next phase and that's the Duke brotherhood, a lifelong bond from the moment players first step into Cameron until the day they die. It was important to that brotherhood that whoever followed Coach K was a part already a part of it.

"Jon's the right guy for a number of reasons," said former teammate Gerald Henderson, who would go on to play for the Charlotte Bobcats. "Number one, he's a Duke guy -- he's been here for a long time, he loves Duke. He's the epitome of what we require here."

"This is going to be a great recipe for success," said fellow former professional player Lance Thomas. "The mentor in Coach K to help him get to this point and to have full confidence in him to be able to carry on the legacy, Jon's ready."

RELATED: 'Nobody can be Coach K': Jon Scheyer praises mentor he will succeed at Duke after upcoming season
EMBED More News Videos

"This is going to be a great recipe for success," said Lance Thomas, a former co-captain with Scheyer.

Thomas was co-captains with Scheyer in 2010 -- and says his incredible leadership skills helped them go from getting knocked out in the first round of the tournament their freshman year to winning the national championship as seniors.

"He has every scenario that could happen as a head coach," Thomas said. "He's not going to be rattled as things don't go as they should when the shift of leadership happens." Lance Thomas

Scheyer's former teammates say he's the type of guy who can fit in with anyone - and it all stems from his love of old-school R&B.

Who is Jon Scheyer, Duke's next basketball coach?

"Well, one of the things Jon loves is old-school R&B."

"He's just a soulful dude," said Henderson. "He really is. We were roommates. We spent a lot of time together. Jon, he cares about what's going on with other people." Henderson

"I'm traumatized from his singing ability in our, I was roommates with him for 2 years," said Brian Zoubek. "Whether it's in the car or in our dorm or anywhere he's always singing R&B. Between that and loving chess, he would always try to play us in chess." Brian Zoubek