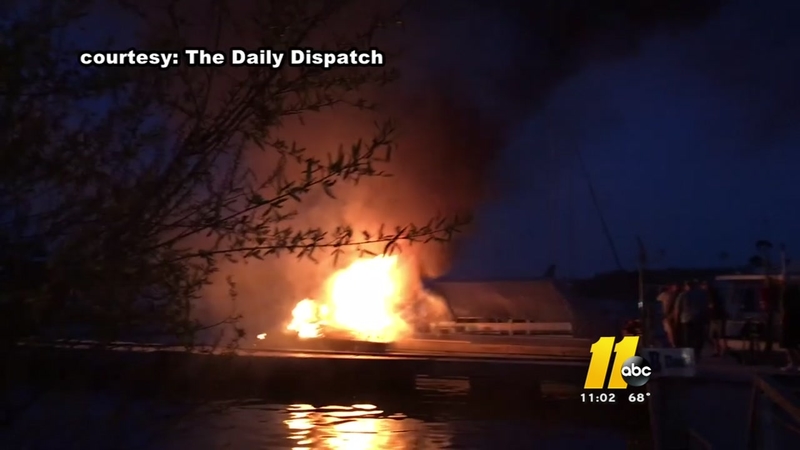 HENDERSON, North Carolina (WTVD) -- The dock is blackened. Three boats burned. One man lost everything in this fire.

It happened Thursday night at the Satterwhite Point Marina. The Kerr Lake superintendent told ABC11 that the fire started on a boat.

The marina owner said there was some type of explosion, and the fire spread to two other boats.

Eyewitnesses also said those flames led to an explosion. They think there may have been a propane tank on board the boat.

Cell phone video from The Daily Dispatch shows the height of the fire and firefighters fighting the flames.

"One of them pretty much lost all he had inside his boat & what he didn't have in his truck was in his boat..."- Bill Moore, boat owner pic.twitter.com/FAgQ0xRx7Y

Boat owners are picking up the pieces.

"They are not feeling well at all today," said Bill Moore, a boat owner. "One of them pretty much lost all he had inside his boat, and what he didn't have in his truck was in his boat. So he is pretty much in bad shape now.

"The other one lost his, but it wasn't his primary home," Moore added.

This is Buddy Boy, he was rescued by another boater at the Satterwhite Point Marina fire #ABC11 https://t.co/ThebACzQW6 pic.twitter.com/3Yuam22DtS

Moore said he has been coming here for 25 years and this is only the second fire he has seen.

He said he and other boaters tried to put the fire out themselves while another boater pulled his 13-year-old dog Buddy Boy to safety.

They all got out safely.

"It got scorched pretty bad on the side of the boat," Moore said. "The wind was blowing the fire away from mine, so I was lucky in a sense that it just got scorched real bad."

"This is our 28th season in business and we've never had any situation like this happen before," Hughes said.

The cause of the fire remains under investigation. The marina is open for business for the holiday weekend.