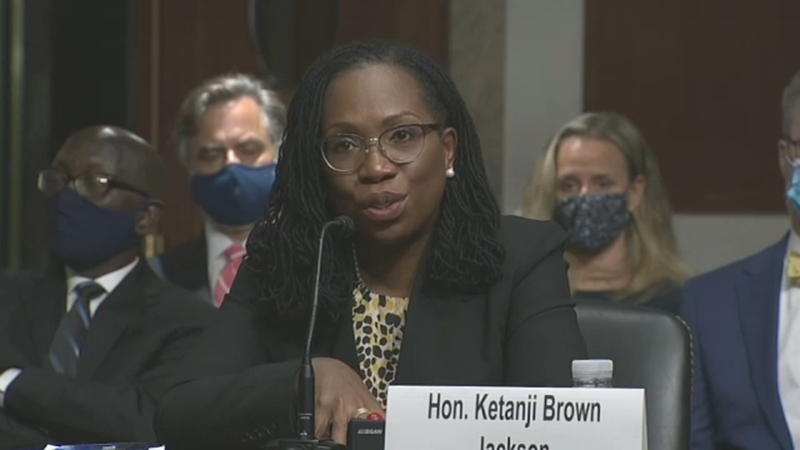 'We are here': Durham attorney, judges on Brown Jackson hearings

DURHAM, N.C. (WTVD) -- History is being made on Capitol Hill as confirmation hearings for Judge Ketanji Brown Jackson are underway. She is the first Black woman to be nominated to the Supreme Court in its 233-year history. The hearings have Black women educated and trained in law watching.

"I think finally we can say we are here, but more importantly we belong here and we've earned the right to be here," said Durham County Superior Court Judge Josephine Davis.

It's a workday for Davis inside the Durham County Justice Center and court was in session. She was seated on the bench overseeing the case but said the confirmation hearings are on her heart.

She admitted that even after President Joe Biden promised to fill the seat with a Black woman, doubt set in. She has been counting votes hoping Jackson has enough to be confirmed.

" I think it's sad that we have to count votes and sit on the edge of our seats with anticipation where that's not normal for us and we haven't seen this," said Durham attorney and UNC-Chapel Hill adjunct professor Valerie Johnson.

Johnson is the daughter of public school educators. She has long admired the work of the first Black Justice Thurgood Marshall. Johnson has been reflecting on the 118 justices in the history of our nation.

"Of those justices, only seven have not been White men. That sends a signal to us as to how far you can reach," Johnson said.

She is a mother of two children and is encouraged as hearings continue. While she expects Jackson to face tough questioning this week, she hopes a confirmation opens the door for other women of color.

"The feelings I know will be shared by many other people that this day has come. I anticipate it and expect to feel great joy," said Johnson.

Black law students said they are inspired by the nomination of Ketanji Brown Jackson to the U.S. Supreme Court.

"Motivating is a great word. Inspiring definitely -- being this close to graduation and seeing a Black woman being nominated to be a Supreme Court justice, it definitely keeps me going," Parker said.

"So to see that happening in real life, it lets us all know we can do that too," Parker said. "We have little Black boys and girls who can go to law school and say I want to be an attorney no matter how far it takes them to see that. Just to see that motivation, that inspiration."

Another law student, Jennifer Garcia, from Boston, said, "It creates confidence in our justice system knowing that there's people like us who are able to help out other people like us in our communities."

Students agreed that judges shouldn't legislate from the bench.