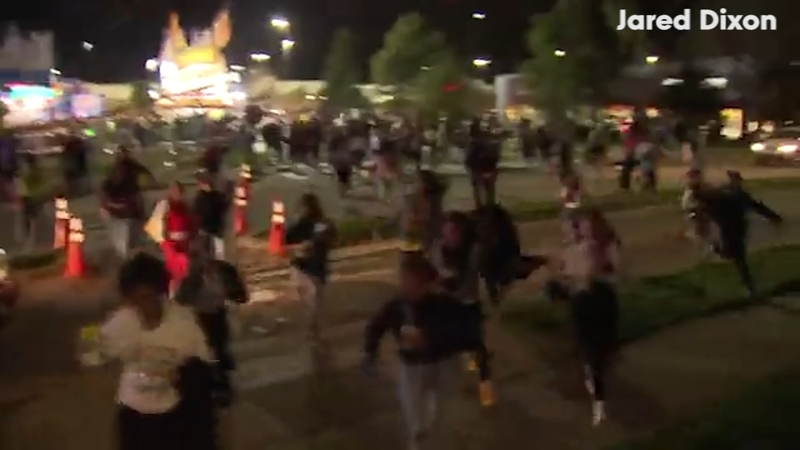 KNIGHTDALE, N.C. (WTVD) -- A family carnival in Knightdale was cut short on Saturday after shots rang out.

"All these people are going and screaming and crying. I see one of my boys and I grabbed him from out of that like screaming running mosh pit," Danyelle Maddox remembered.

Maddox was at the event with her family. She said they were in line for food when the shooting happened.

Justin Staonkford was also in attendance and was playing a carnival game with his girlfriend when shots sent them to the ground.

"We were trying to win a goldfish and then I just heard I heard shots and we saw people running. It's terrifying. We were laying down and we just waited for the cops to arrive," Stanokford recalled. "I've never been in a situation like that. So we just got down and waited for safety."

The carnival in the Midtown Commons Shopping Center was hosted by the police as a fundraiser for the Special Olympics. The shooting on Saturday caused the town to cancel the event for its final day on Sunday and issue refunds. Those in attendance Saturday night can still vividly remember the scary scene.

Knightdale police said the shooting happened around 9 p.m. after a large fight broke out by the concession stands. Officers were breaking up the fight when shots were fired at a parking lot nearby.

At least two cars were hit and a 16-year-old boy was treated for minor injuries at WakeMed.

"It was very chaotic. Like, the heart sank. I was like, Is this real? You know? You hear about it online and on the news and stuff and then when you see it in real life it's a lot different," said high school student Gary Williams.

The police are still investigating the case and have not made any arrests yet. Knightdale Police Chief Lawrence Capps said the department is offering a reward to anyone who can give strong credible information about potential suspects.

"Words cannot begin to describe the anger we feel over this senseless act of violence," Capps said in a statement during the weekend. "Our annual Special Olympics Carnival should be a time of fun and celebration for a worthy cause. Instead, a small group of deviants choose to endanger the lives of hundreds of people with their malicious actions. It reeks of lawlessness and a blatant disregard for others' lives. It is a miracle no one was killed or seriously injured."

Maddox said they are thankful their family and everyone else is safe but her 4-year-old nephew is still shaken up.

"Everybody's doing good, but the 4-year-old, you know, he keeps talking about how scary it was and how his uncle Robbie was gonna die," Maddox said.

She said the police and carnival workers did a good job of responding after the incident. Her family was also able to get money back for the tickets they purchased. She said they are trying to keep the shooting in perspective but may be more careful with the events they attend going forward.

"We do want to stay with the safer ones like the State Fair because they do have the metal detectors and things like that, so they check everybody at the gate. But you know, I do think it's like a one-time incident. I don't think it'll happen in everyone that you go to," Maddox said.

The Town of Knightdale said Saturday's incident shouldn't detract from the town's history of hosting a safe atmosphere at its Spring Carnival for the past 15 years.

"At every event, public safety is paramount. We do our best to mitigate potential threats, but the guarantee of absolute safety often includes and depends on others adhering to a sense of social duty and responsibility. We send kudos to the officers on scene who rushed to the area, ready to confront the armed assailant. We also send gracious thanks to the men and women in blue who ushered people to safety and worked to clear the scene," a spokesperson for the town wrote in a statement.