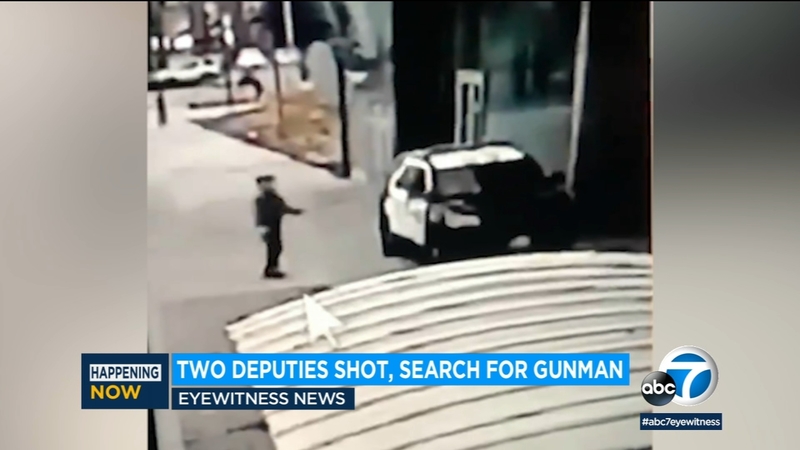 2 LASD deputies 'fighting for their lives' after ambush shooting

COMPTON, Calif. -- A massive search for a gunman is underway as two Los Angeles County Sheriff's Department deputies are "fighting for their lives" after they were shot in the head in an ambush at the Metro station in Compton, officials say.

The incident happened Saturday at the Metro Blue Line station at Willowbrook Avenue and Compton Boulevard around 7 p.m. The location is a short distance from the Compton sheriff's station.

Surveillance video of the shooting shows the suspect ambush the deputies as they sat in the patrol vehicle.

A man clad in dark clothing walks up to the parked vehicle at the Metro station, approaches the window on the passenger's side and fires several times at close range. The suspect then runs off on foot. One deputy is seen emerging from the passenger side and stumbling around on foot for several seconds before the video ends.

Both deputies sustained multiple gunshot wounds and underwent surgery at a local hospital. They were described as alive but in critical condition.

"That was a cowardly act," Sheriff Alex Villanueva said. "The two deputies were doing their job, minding their own business, watching out for the safety of the people on the train."

"To see somebody just walk up and start shooting on them. It pisses me off. It dismays me at the same time. There's no pretty way to say it."

One deputy was described as a 31-year-old mother of a 6-year-old boy. Her husband came to St. Francis Medical Center in Lynwood after the shooting.

The other deputy was a 24-year-old man and his girlfriend and parents came to hospital.

Villanueva said he swore in both deputies to office just 14 months ago in the same class.

Officials were not able to get a detailed description of the shooter other than a man. Officials cautioned that the surveillance video released from the scene uses a fisheye lens so the suspect's height and weight may be slightly distorted from reality.

The department tweeted: "Moments ago, 2 of our Sheriff Deputies were shot in Compton and were transported to a local hospital. They are both still fighting for their lives, so please keep them in your thoughts and prayers."

Moments ago, 2 of our Sheriff Deputies were shot in Compton and were transported to a local hospital. They are both still fighting for their lives, so please keep them in your thoughts and prayers. We will update this thread with information as it becomes available.

Deputies blocked off streets in the area and are searching for the suspect.

Dozens of deputies were searching the area near the Compton metro station where a lone gunman ambushed two sheriff's deputies, leaving them in critical condition with multiple gunshot wounds.

The department had at least 14 homicide detectives on scene to investigate along with forensic specialists, the Special Enforcement Bureau, K-9 units and other department personnel.

President Donald Trump also reacted to the shooting, retweeting the sheriff's department video and commenting: "Animals that must be hit hard!"

Compton Mayor Aja Brown posted a statement on Instagram: "I am devastated to learn of the tragedy that occurred in our city tonight. Both deputies and their families will remain in our prayers."

A small crowd, including some apparent demonstrators, gathered near the hospital in Lynwood where the deputies were transported. Witnesses say members in the group were chanting anti-law enforcement slogans and at one point tried to get inside the hospital.

To the protesters blocking the entrance & exit of the HOSPITAL EMERGENCY ROOM yelling "We hope they die" referring to 2 LA Sheriff's ambushed today in #Compton: DO NOT BLOCK EMERGENCY ENTRIES & EXITS TO THE HOSPITAL. People's lives are at stake when ambulances can't get through.

It appears a radio reporter was caught up in the chaos. Sheriff's deputies were seen tackling a woman, later identified as reporter Josie Huang for 89.3 KPCC who had been covering the earlier press conference, to the ground and then taking her into custody. She appeared to be wearing media credentials as deputies took her into custody.

Hours after her arrest, Huang tweeted that she was headed home and said she would share more about the incident "after a little rest."

Several anti-law enforcement protesters showed up to a hospital where two deputies were being treated for gunshot wounds and a radio reporter was caught up in the chaos when deputies went to control the group.

Hi, all. I’m out of county jail and am headed home. Thank you for caring. I have seen @LASDHQ tweets and have thoughts and videos to share soon after a little rest