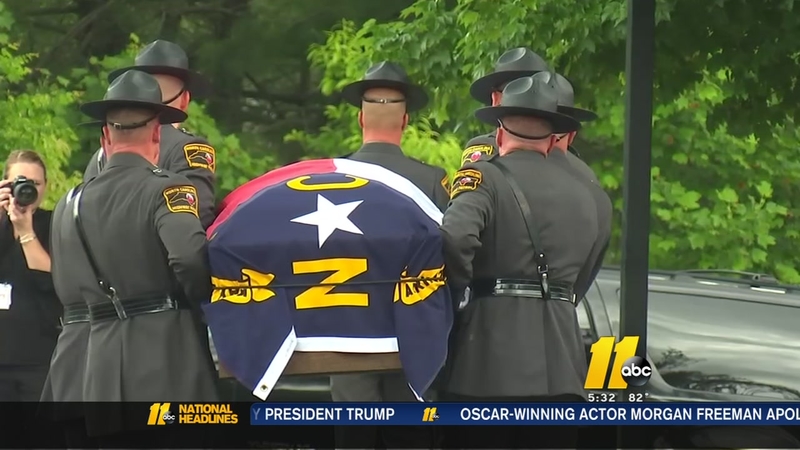 Authorities from across the country made their way to North Carolina Friday to pay their final farewell to State Highway Patrol Trooper Samuel Bullard.

Bullard, 24, died in a crash with a suspect who had passed through a license checkpoint. The crash happened along Interstate 77 southbound near NC 67 in Yadkin County.

Dakota Whitt, 22, was arrested in connection the crash.

On Friday, the focus was not on the investigation, but Trooper Bullard's legacy and impact on others.

"This extraordinary young man who worked very hard, and did what he was supposed to do. And we're grateful for his life," said Governor Roy Cooper, the first to speak during the hour-long funeral.

Cameras were not allowed inside, but media was invited to listen in.

Governor Cooper described Bullard as being "full of the spirit of service."

Reverend Victor Church led the service and was the final speaker. During his remarks, he jokingly recalled Bullard's proposal fell on April Fool's Day of this year. He also read aloud a note written by Bullard's fiance, where she shared her never-ending love and devotion.

Sgt. Knox was one of more than a thousand law enforcement personnel to converge on the Walker Center on the campus of Wilkes Community College in Wilkesboro. He explained the impact of placing the ceremonial black band over his shield in memory of Bullard.

Trooper Bullard's dedication and professionalism were brought up by many throughout the day.

"It should really motivate all of us to strive to be like him, and to honor him by going out in the communities and being the trooper he was in his community," said Sgt. Knox.

Bullard's three-year anniversary with State Highway Patrol would have been June 21.