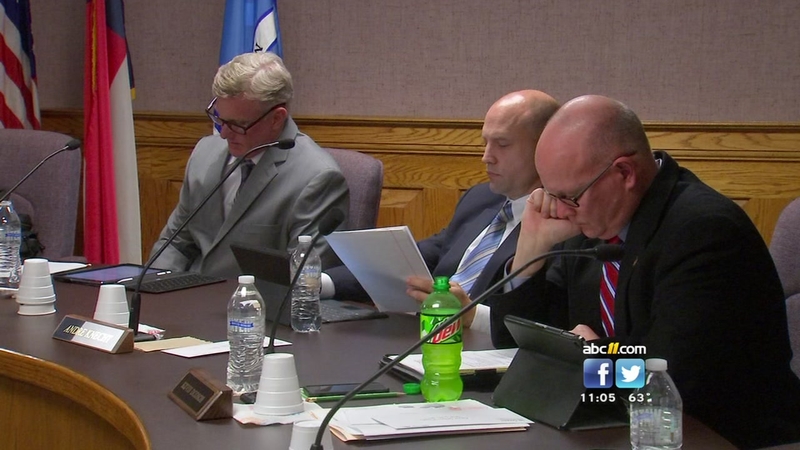 SANFORD, North Carolina (WTVD) -- Lee County residents were serving hot cups of Starbucks coffee ahead of Monday night's board of commissioners' meeting. They were serving it to make a point before many resident stood at the podium during public comment to call on one of the commissioners to resign.

"Because of his lack of basic decency and his blatant bigotry, I'm of the opinion he should be asked to step down," said Sanford resident, Troye Davenport.

Nine people spoke during public comment. Eight complained about a recent post on Facebook by Commissioner Dr. Andre Knecht. The post depicts a Muslim man sitting on a toilet and a misguided perception of personal hygiene.

The post also criticizes Starbucks and its vow to hire 10,000 refugees in response to President Donald Trump's proposed travel ban to the United States against seven predominately Muslim countries.

He then had to ask the crowd to respect his time at the podium when they started to criticize his comment.

Sanford resident Alyse Lopez-Salm was also in the crowd.

"I moved here in 2014 with my husband, who is a sergeant first class at Fort Bragg. We found Sanford to be a very attractive place," Lopez-Salm said. "He'll be retired in four years but we're not sure if this is actually where we want to raise our children.

"You might be able to tell from my face and my last name that I'm probably married to someone of another race. I'm not going to be choosing this place as somewhere to raise a mixed race child when I know I have someone on my county board of commissioners who feels so freely to post bigoted things on his Facebook page," she added. "It is ignorant, inappropriate and frankly dangerous to allow someone with such closed-minded views to serve in this position of power."

When it came time for commissioners to have the floor, many responded to the public comments.

"I'm going to do my best to be my own man. I heard a lot about social media and I know I can do a better job in that area," said Commissioner Cameron Sharpe. He also pointed out that there are 14 deals on the table right now to bring hundreds of jobs to Lee County. He alluded to wanting to keep those opportunities on the table.

Commissioner Larry Oldham thanked Starbucks for moving into the community and providing jobs, and Commissioner Kevin Dodson thanked everyone for voicing their concerns.

Vice Chairman Tim Sloan said he knows he himself is not without fault or mistake and asked residents for patience.

"I just ask that you bear with us in our good times and in our hard times," Sloan said. "Know that we're striving to bring jobs to Lee County, to improved individual lives and that we hope to make this the best county in the state and I think we can do that with the board we have. I just ask that you give us a chance."

Commissioner Knecht did not speak during commissioner comments. He also declined to comment after the meeting.