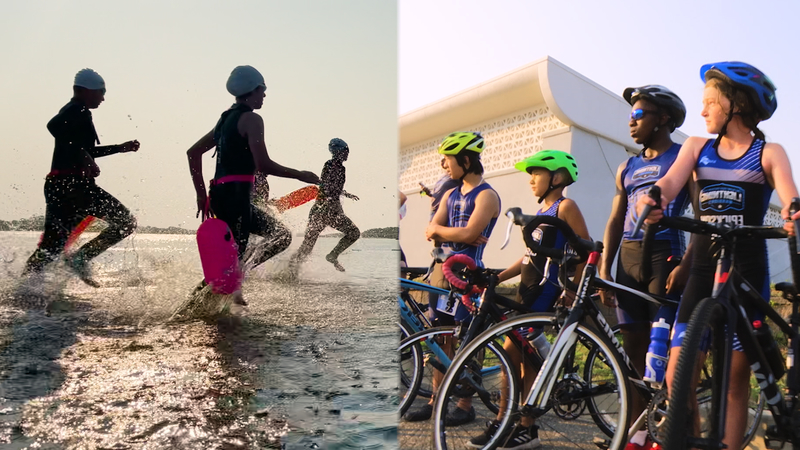 OYSTER BAY, New York -- Swimming, biking, and running are activities that most kids have done at one point or another.

However, when it comes to doing all three in one day, this might not be a common occurrence unless you're an athlete with the Lightning Warriors, a not-for-profit triathlon team focused on making the sport of triathlon available to all young athletes.

Head Coach and Founder Noah Lam came up with the idea in 2016 when his eldest son wanted to compete with more kids instead of competing with adults.

"We're here to help more kids get involved with the sport of triathlon," said Lam, who never imagined he would be coaching a sport he fell in love with when he trained for his first ironman triathlon in 2014.

"Getting in as many kids as possible, making sure it's inclusive for all kids," said Lam. "Having the families get involved, making a bigger community so they can be supported, and mostly just to have fun."

Before Lam created the team, he lived a very active lifestyle but had a setback when he had experienced a seizure due to brain malformation and sleep deprivation.

"From there, I really thought about doing something I never thought I could do before, and that was doing triathlons," said Lam.

What started as a small passion project has now grown to 80 kids on his roster, ranging in ages range from as young as 7 to as old as 15.

"I was nervous, it takes a lot of courage to keep doing it all, and I train every single day," said 12-year-old Eleni Astras, who joined the team as a first-timer.

"I feel great, I feel really good about myself, and I feel healthy and confident," said Eleni Astras.

Before Eleni joined the team, she watched her older brother compete which led her to want to give it a try.

"I love seeing her develop her self-confidence," said Kalpana Astras, Eleni's mom, who loves to watch her daughter practice with the team after being cooped up in the house most of the year from the pandemic.

"It helped her really understand how athletic she is, how strong she is and what she can accomplish," said Kalpana Astras.

Lam's practices consist of building on combinations of swim, bike, and run and other fun strategies that will help improve skills for each child.

Related: Train like a ninja warrior while you gain strength at Obstacle Athletics

He loves watching his love for the sport spread to the kids who are a part of this team, which is more like a family.

"I think it's amazing how something I never thought of doing can become a reality," said Lam. "I think triathlon provides that avenue or access to doing something extraordinary."