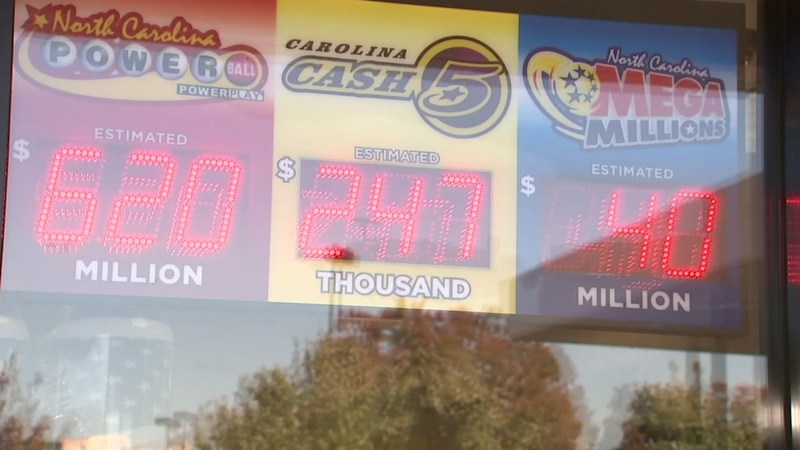 RALEIGH, N.C. (WTVD) -- The winning $1.5 billion Mega Millions ticket was not sold in North Carolina, but two $1 million tickets were!

North Carolina Education Lottery (NCEL) announced Wednesday morning that two tickets were sold in the state that matched all five white balls in the drawing. Those tickets are worth $1 million

One of those winning tickets was sold in Cary at the Circle K on Harrison Avenue. The other $1 million winner was sold in Monroe, a city in Union County near Charlotte

Check your tickets folks! Two tickets worth $1 million each were sold in N.C. for last night's #MegaMillions drawing. The tickets were sold at the @CircleKStores on Harrison Ave. in #Cary, and the Zoom Express on Skyway Dr. in #Monroe. Retweet to help us spread the news! pic.twitter.com/qt1A2i1OAp

"We can't wait to meet the two lucky players who won $1 million," said Mark Michalko, executive director of the N.C. Education Lottery. "This record Mega Millions jackpot created a lot of fun and along the way that fun produced a big win for education in our state."

The lucky $30,000 tickets were bought at the Food Mart (Dev Mart) on East Mountain Street in Kernersville and at a Food Lion on Gilead Road in Huntersville.

The nine $10,000 tickets were bought in the following locations:


All told, prizes in North Carolina totaled $4.1 million for this drawing.

Thirty-four other tickets won the second-tier prize: eight in California, four each in Florida and New York, two each in Massachusetts, Michigan, New Jersey and Virginia, and one each in Arizona, the District of Columbia, Iowa, Kentucky, Missouri, New Mexico, Ohio, Pennsylvania, Texas and Wisconsin.

The North Carolina winners will have to go to the NCEL Headquarters in Raleigh. They must also fill out this form and bring with them a photo ID and social security card.
The winners have 180 days to claim their prize.

Meanwhile, the Mega Millions jackpot will return to $40 million. That's because at least one jackpot winning ticket was purchased.

Tuesday's drawing was initially thought to be the largest jackpot ever, but lottery administrators said the actual jackpot was less than the estimated $1.6 billion. It came in at $1.5 billion which is slightly less than the $1.586 billion Powerball jackpot split between three winning tickets in 2016.