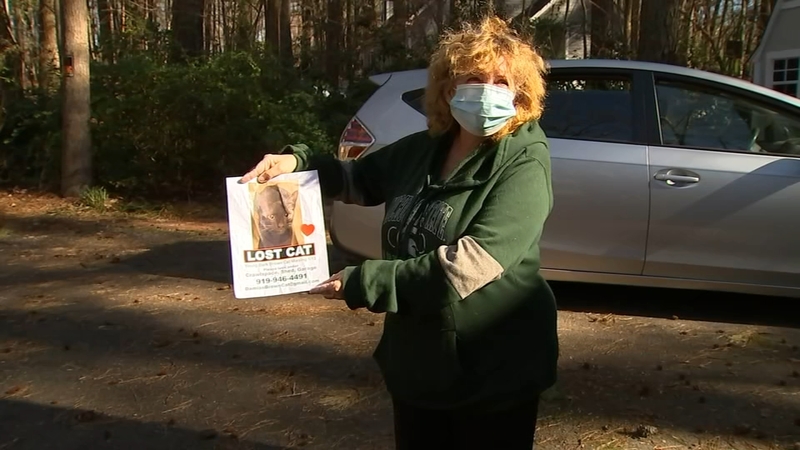 Love placed lost cat flyers throughout the neighborhoods close to her home, hoping someone would spot Damian.

"I have little fliers that I put in baggies and put on all the mailboxes. I've done hundreds of those. I just want my cat back," Love said.

She even posted on the Triangle Lost Pets website along with Craigslist. Soon after posting online, she got an email, along with a picture of what appeared to be Damian.

Before she responded, she noticed the picture of the cat didn't seem exactly like Damian so she did some research.

"I did a reverse image search with images on Google and that's when I found it all over the place," Love said.

Soon after she stopped that scam, she got a text from another person, who also claimed to find her cat. In the text, the person wanted to confirm she wasn't fake and texted her a Google code to her phone number,

"I need to verify the six-digit code. That made no sense because he already had my phone number," Love said.

With this scam, if you give the verification code to the person, they could use that code along with your phone number that you posted in the lost-pet ad to get their own free Google phone number. With that new number, cyber-crooks could use it for illegal activities and you would never know about it. An even bigger risk, scammers could get access to your Google account if they have enough information.

If those two scams weren't enough, Love then got an email from a person who wanted to help. This time they provided a link to a website to get the word out about her lost cat. The email stated it would just cost "50 USD" to post.

"USD for US dollars and Americans don't use that, so that was my red flag to that one," Love said.

The money is one thing; if she would have clicked on the link, that could have led to a host of other problems.

Love still doesn't have Damian back but wants to warn others about these scams.

"Just upsetting when you're missing a pet to that they take advantage like that," she said.

You can't let your guard down as scammers like to take advantage of emotional situations. The red flags are when they ask for money, especially if they ask in gift cards, or through cash apps.