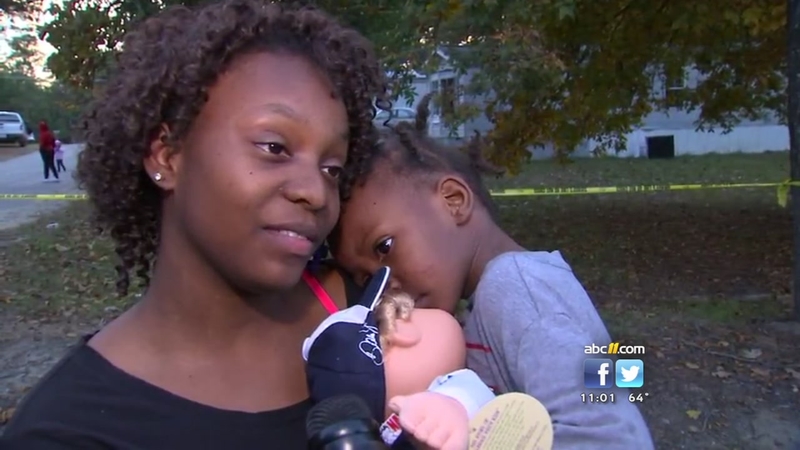 ABC11's Akilah Davis was the only reporter on the scene when investigators rushed a little girl out of an empty home and into a car.

ABC11 was on the scene the moment 3-year-old Zy'Rah Holliday was found.

Harnett County Sheriff Wayne Coats later confirmed that the child found about 5 p.m. in an abandoned mobile home between Crest Circle and Joint Road was indeed Zy'Rah, the subject of an Amber Alert and intense two-day search.

"We have reached the goal that we always said," Coats said. "It's just a great time."

A missing 3-year-old girl has been found safe.

Zy'Rah appeared in good health at a news conference with her mother and other family members. Coats said she was "a little dehydrated" when she was found.

Coats said an "anonymous family member" helped tip off investigators to the mobile home park where Zy'Rah was ultimately found.

Coats said the abduction suspect, Daquan Thomas told a friend of the general area where he left Zy'Rah. That person later told investigators.

Zy'Rah and her mom Wednesday.

The sheriff said the toddler would be taken to a hospital for routine medical evaluation.

Zy'Rah's grandfather was excited to hear the news.

"Those thousands and thousands of prayers brought her home, he said. "Thank you."

Zy'Rah's father, Jamal Holliday, also expressed his gratitude to all who helped find his daughter.

Coats thanked all the agencies that help in the search.

Asked about the family's immediate plans, Murchison said they would go eat.

"McDonald's, whatever she wants," she smiled.

The sheriff said the criminal portion of the investigation will continue. Additional charges may be filed.

As the search for a missing 3-year-old girl in Harnett County intensifies, the man accused of abducting her appeared before a judge for child abuse and abduction charges.

An Amber Alert was issued for Zy'Rah Nicole Holliday on Tuesday.

She was allegedly taken by 20-year-old Daquan Seandre Thomas around 7 a.m. from her home in the 100 block of Sweet Lane in Spring Lake.

Thomas was taken into custody Tuesday afternoon and appeared before the judge Wednesday morning.

Thomas is charged with one count of felony child abduction and two counts of misdemeanor child abuse. More charges are pending.

The sheriff said Thomas, of the 200 block of Rambeaut Road in Spring Lake, was dating the girl's mother.

He is also the father of one of her two children, an 11-month-old boy who was also taken from the Sweet Lane address.

Harnett County Sheriff Wayne Coats said Tuesday that the boy was found around 10:45 a.m. at a family member's house. He had minor cuts and bruises, and was released to his mother.

Authorities are still searching for the 3-year-old girl. They said Thomas has not revealed where the girl could be.

During a news conference Wednesday, Coats said they are checking nearby ponds as part of their search.

Zy'Rah is described as a black female, approximately 3 feet tall, and weighing 35 pounds. She has brown hair and brown eyes.

She was last seen wearing a black shirt with flowers and the word "Love" on it with black jogging pants.

Coats said authorities are continuing to conduct interviews and review videotape from the area of the abduction.

The sheriff added that a 50-B order was issued for Thomas on Monday afternoon, taken out by the children's mother. Deputies were not able to serve Thomas with that order Monday night because they could not find him.

In protective order filed day before kids went missing,mom alleged her boyfriend threatened to hurt her & their son: https://t.co/sZwsfYXe6P pic.twitter.com/GBQ93I9ggM

The girl's mother said she was afraid for her own safety and that of their 11-month-old son. She alleged in the complaint that Thomas threatened to hurt them both.

Thomas remains in jail under a $200,000 bond. He has a probable cause hearing on Nov. 14 in Harnett County District Court.

The FBI is assisting the Sheriff's Office, The NC Highway Patrol and Brunswick County Sheriff's Office have assisted with the search with use of their helicopters. Anderson Creek Fire Department, Anderson Creek EMS, Harnett County Specialty Team, Harnett County Emergency Services, Lee County Emergency Services and the NC Center for Missing and exploited Children are assisting.