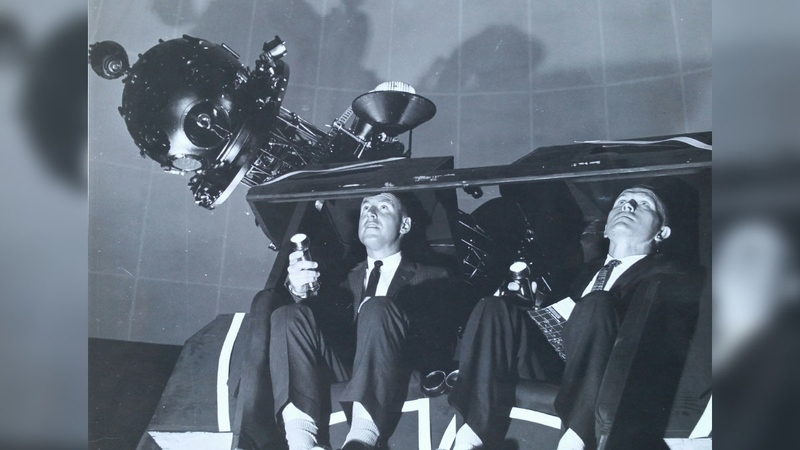 CHAPEL HILL, N.C. (WTVD) -- Without the Morehead Planetarium at the University of North Carolina, NASA astronauts may have never landed an American on the moon.

"Morehead Planetarium was critical to all of the astronauts getting home safely," planetarium historian Michael G. Neece says.

From 1960 until 1975, NASA sent astronauts to Morehead Planetarium to learn how to use the stars to navigate. Venture into the planetarium's dome in the 60s and early 70s, and you might bump into Neil Armstrong, Buzz Aldrin, or Charles Duke.

Eleven of the 12 people who stepped foot on the moon trained at the Morehead Planetarium (Harrison Schmitt was the only one to never make it to Chapel Hill).

But why did NASA--which launched out of Cape Canaveral, Florida, and was based out of Langley, Virginia (until 1964 when it moved to Houston, Texas)--choose Chapel Hill?

Jenzano was born to Italian immigrants in Philadelphia. He joined the Navy and fought in the Pacific Front in World War II.

"He was an electronics technician and a mechanical genius," Neece said.

When Jenzano returned home from the war, he got a job taking care of the star machine at the Fels Planetarium in Philadelphia.

A few years later in 1949, John Motley Morehead III's dream of giving back to the university he felt he owed a great debt to was realized with the completion of the Morehead Planetarium.

The director of the Fels Planetarium, Dr. Roy K. Marshall, left to become the director of the newly completed planetarium in Chapel Hill. Marshall insisted Jenzano come with him because Jenzano was one of the only Americans familiar with the Zeiss star projector, which was to be installed in the Morehead Planetarium.

Two years after opening the Morehead Planetarium, Marshall resigned and put Jenzano in charge. Jenzano, a second-generation American who never went to college, was running the first planetarium on a university campus and the only planetarium in the South.

"When NASA approached him and said, you know, 'We need somebody to train these guys to navigate by the stars.' It was just easier for him to see the value in it because he'd been off to war; he'd been in the Navy; he knew that part of their survival training was to learn the stars," Neece said. "So I think that's what drove him to say, 'We will make this work. We will find a way to have this happen."

That's exactly what he did. Under Jenzano's leadership, the Morehead Planetarium trained 62 astronauts over 16 years.

Astronauts who flew Gemini, Mercury, and Apollo missions learned the stars in Chapel Hill. Their general training included learning to navigate using the Earth and the Moon and 57 stars--later the program was trimmed down to only use 37 stars.

Once the astronauts received their mission orders, they would return to Morehead Planetarium to learn the navigation specifics about their mission that would help keep them alive.

"They would go up and have to know what stars should be outside of any particular window at any given important moment during a mission so that they could calibrate their guidance and navigation system onboard, or if they lost that guidance and navigation system they would be able to fly by stick and by their memory of what they had seen at the planetarium. So it was critical to every single mission," Neece said.

According to Neece, the most compelling case for the importance of the training astronauts received in Chapel Hill came during the Faith 7 mission, the last of the Mercury missions.

Astronaut Gordon Cooper was on his way back to earth when all of his primary and secondary navigation equipment fritzed out. He looked out his window, found three stars that he'd seen many times before inside the Morehead Planetarium dome and navigated his craft to splashdown in the ocean.

When all was said and done, Cooper's splashdown--done without a working navigational computer--was the most accurate of any during the Mercury missions.

Jenzano and the Morehead Planetarium were crucial to the success of NASA in the 60s and 70s. But for Neece, it's more than just a footnote in history. He knows the power of those stories and the wonderment of space can still inspire dreamers today.

"You sit them in (the planetarium dome), you talk to them about what they are about to see. OK, you've prepared them, but as soon as you bring down those lights, you always hear, 'Oooo,' 'Ahhh,' 'Wow.' There is still that wonderment," Neece said. "You can be 10; you can be 80. You can walk into that star theatre and the depiction of the stars is so realistic that it makes you want to go outside and look at the real stars."

And despite the technological advancements in the half-century since NASA sent Americans to the moon, Neece said celestial navigation will remain vital for any future space travel.

"Imagine that you're on the first human journey to Mars. You're still going to have to sight stars on your way there. You may have the most amazing equipment--right? We're living in the age of iPhones, Android devices, things like that--but if you lose your electricity, if something goes wrong--and things always go wrong on missions--you better have a backup system. And the best backup system you can have on any space mission is a human being with a lot of knowledge. So that star training still matters today. If I ever get to sit down with Elon Musk or Richard Branson one of the big questions I would want to ask them is, 'Where are you giving your astronauts their stellar navigation training?' Because they're going to need it. Think about the second part to the question though: once you're on Mars. Let's say you have to navigate from one point on Mars to another and night falls. It would be really handy to know the stars. You don't have an entire GPS system around Mars at that point. How are you going to find your way home? What happens if you've lost the one device that's going to help you key into your GPS system even if there is one? It's always good to know the background. Ask any Boy Scout. It's always good to know which way you're pointed if you are lost."

To hear more from Neece--or "Meteor Mike" as he's known at the planetarium--consider seeing one of his shows at Morehead Planetarium. He usually leads the Carolina Skies show, which is presented Saturday at 2:30 and Sunday at 3:30.

In honor of the 50th anniversary of the moon landing, Morehead Planetarium invited Charlie Duke back to Chapel Hill. He spoke to a sold out crowd at the Sonja Haynes Stone Center on Feb. 22. The first African American woman in space, Mae Jemison is also scheduled to visit and speak. Get tickets to her event here.