WTVD
By Meredith Carroll for Babble 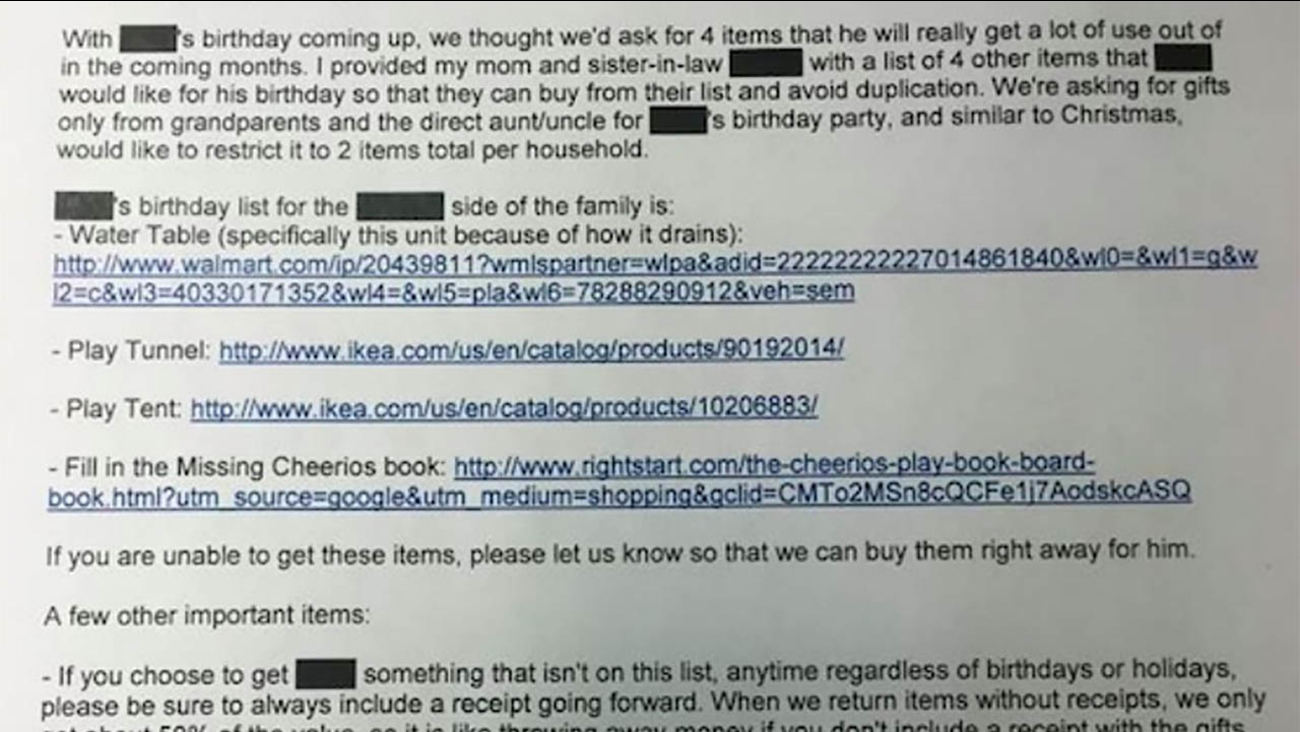 This story first appeared on babble and is reprinted with permission.

We all have Mom-ster moments. But there are Mom-zillas, and then there are Godzillas who just happen to have kids.

A regular Mom-zilla moment might be, say, a proud mother who thinks her kid worked hard and deserves a better score on a spelling test when the answer was close enough. A Godzilla moment, on the other hand, is when a mother emails a preamble-to-the-Constitution-length diatribe about what not to get her kid for his birthday, what to get him, and regardless of what you get him, to include the receipt. 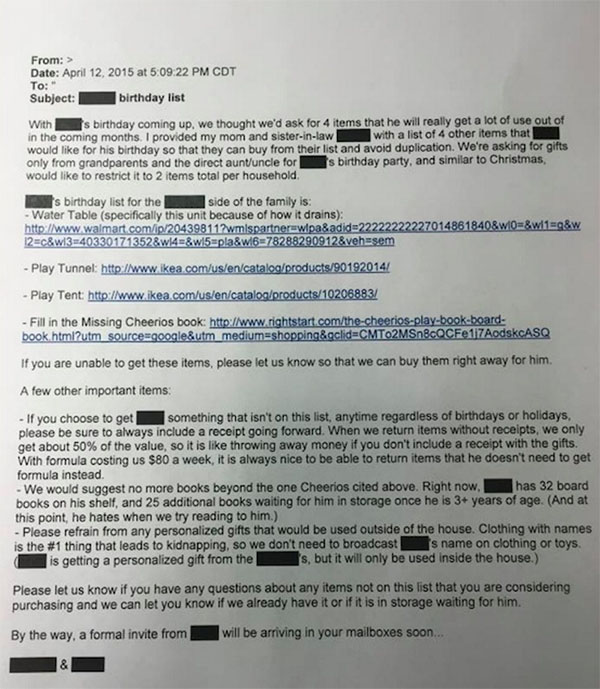 A Reddit user named razz32 posted an email like that recently, calling it the "most demanding 1st birthday party invite ever." Some of the highlights include:

1."If you choose to get something that isn't on this list, anytime regardless of birthdays or holidays, please be sure to always include a receipt going forward. When we return items without receipts, we only get about 50% of the value, so it is like throwing away money if you don't include a receipt with the gifts. With formula costing us $80 a week, it is always nice to be able to return items that he doesn't need to get formula instead."

So you're taking his birthday money and spending it on formula? Nice. I'm sure your kid is really excited about that.

2. "Please refrain from any personalized gifts that would be used outside of the house. Clothing with names is the #1 thing that leads to kidnapping, so we don't need to broadcast names on clothing or toys."

In other words, if the kid goes missing, it's your fault. Though it should be mentioned that Missing Children International details the top 10 reasons why children get kidnapped. Personalized T-shirts are conspicuously absent from the list.

3. "We would suggest no more books beyond the Cheerios one cited above. Right now, he has 32 board books on his shelf, and 25 additional books waiting for him in storage once he is 3+ years of age. (And at this point, he hates when we try reading to him.)"

The kid has an arsenal of 57 books he doesn't read and chances are he still poops his pants. We're also going to guess he hasn't been accepted to Harvard yet. And she's not only keeping the kid but giving him a party? She should be the one getting gifts.

The mom also lists exactly what to get her little prince, with the prices ranging from $7.99 to $63.99. Depending on where you live and how much money is generally spent on birthday gifts -- for a 1-year-old -- the higher end of this range seems a bit ridiculous.

In her defense, though, perhaps some of the party invitees asked what the little boy might really want. There's something to be said for giving a gift that you know the recipient will actually like and use, although custom in a polite society generally dictates that everyone plays a game of charades in which gifts are not specifically requested, rather, it's your presence that is the present.

She adds that if anyone is unable to purchase the gifts on her list to let her know "so that we can buy them for him right away." Which, if you think about it, is truly the decent thing to do -- because you never know when a child will have an emergency necessitating a play tent or Fill-in-the-Missing-Cheerio book.

No word on if, for his second birthday, his mother will request a Get Out of Jail Free card ("I feel like this is an approximation of what an email from Ted Bundy's mom would look like," commented a Reddit user) or donations for his future therapy fund ("Poor kid doesn't stand a chance," said another Redditor).

More from Babble:
New Mom Gets Letter from "Friends" Sick of Hearing About her Baby
Mom Creates Newborn Yelp Reviews (and They're Genius)
Ridiculous Daycare Note Accuses Baby of Being "Aggressive"