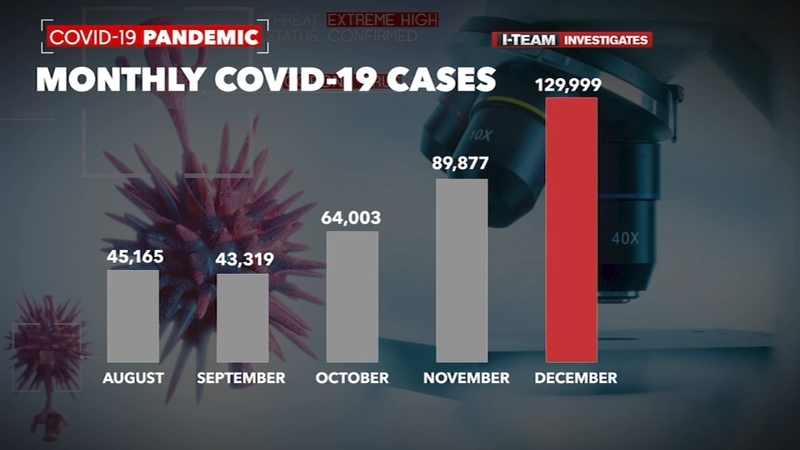 December is deadliest month for NC in COVID-19 pandemic

The month isn't over yet, but North Carolina is already reporting the highest number of new COVID-19 cases and deaths.

As of Wednesday, North Carolina reported around 130,000 cases in December--a total that is three times more than the number of cases reported in September. North Carolina Department of Health and Human Services did not update numbers on Thursday due to the Christmas holiday. 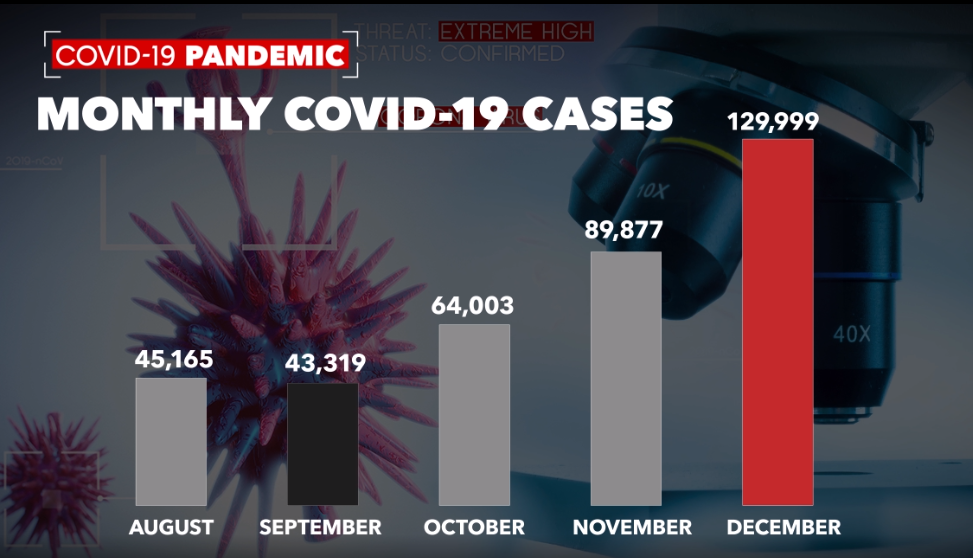 So far this month, 1,099 people have died from the virus, making it the deadliest month of the pandemic for North Carolina by more than 200 deaths.

While the number of new deaths has increased since the summer, the increase accelerated in December.

"The lows of this past week have been painful," NCDHHS Secretary Dr. Mandy Cohen said during a news conference Tuesday. "The number of North Carolinians who have died from this pandemic surpassed 6,000."

The number of COVID-19 tests coming back positive is also trending upwards. On average 10.9% of all tests were positive in December; a rate nearly double what the state reported in September.

Before Thanksgiving, health officials warned of increasing metrics in December. This week Gov. Roy Cooper confirmed the holiday did impact the pandemic.

"We certainly did see effects from Thanksgiving in our numbers, no question about that," Cooper said during Tuesday's press conference. "I think Dr. Cohen would tell you we did better than we thought we would do overall but we do expect higher numbers from Christmas."

Cooper and Cohen said they are hopeful North Carolinians will heed recommendations to safely celebrate the upcoming holidays.

"We hope that we don't see a surge after Christmas but when people get together, when we know a lot of these things are happening in other people's households and with family get together we expect to see some increase in those numbers," Cooper said on Tuesday.

ABC News obtained the latest report from the White House Coronavirus Task Force that shows metrics are starting to stabilize in North Carolina. But, as Cooper said Tuesday, those numbers are stabilizing at a high rate of new cases.

North Carolina's COVID-19 metrics are stabiillizing, but at a level much higher than state leaders would like to see.

"This virus continues to spread quickly. Don't get numb to these numbers. They have plateaued a bit over the last few weeks but they are too high," Cooper said.

The report still finds some alarming data, including moderate to high community spread in 98% of North Carolina counties. Cumberland and Johnston counties are on the list of counties with the highest level of community spread.

The entire U.S. saw a surge in new cases in December, so comparatively the report shows North Carolina (405) has fewer new cases per capita per the national average (462).

The White House report recommends the state consider limiting capacity requirements at bars and restaurants. Earlier this week, Cooper said there are not currently any plans to modify the stay-at-home order to put further restrictions on bars and restaurants, but more measures could be added if numbers remain high.

State health leaders are continuing to remind people to celebrate safely this holiday season to help prevent another spike in cases.