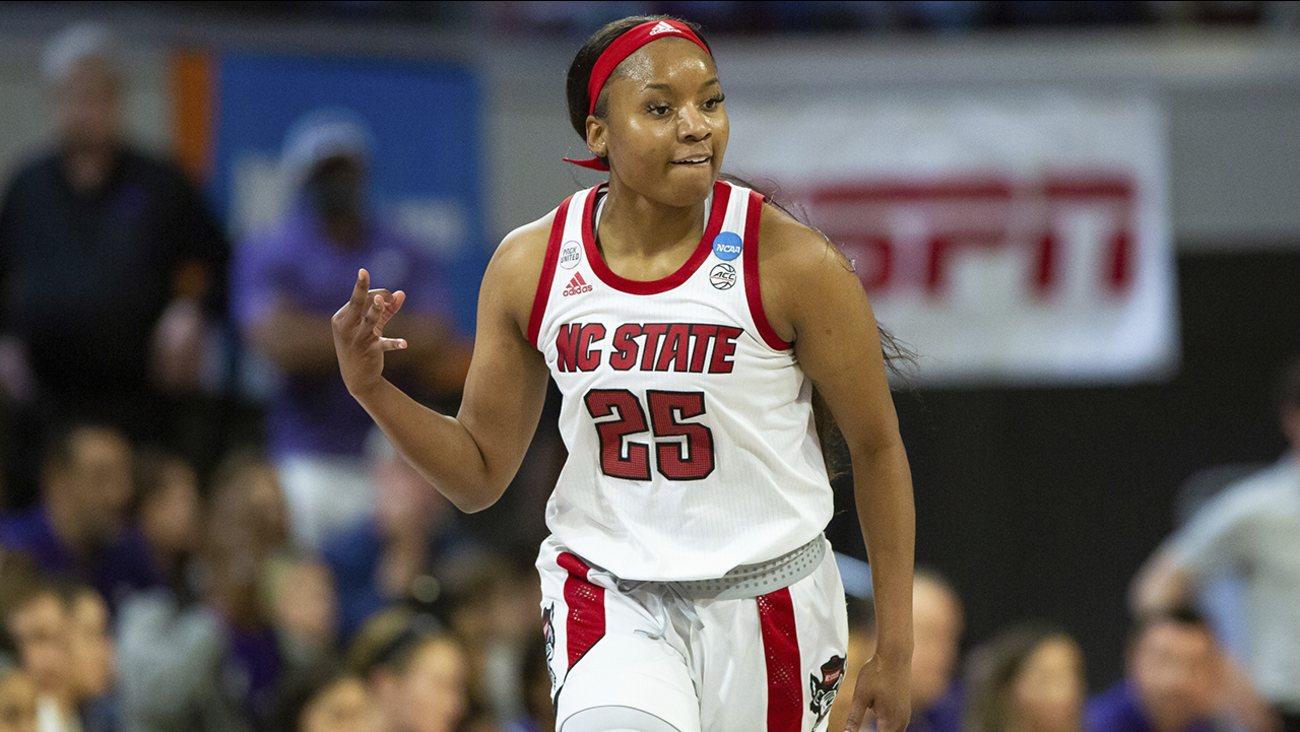 North Carolina State's Kayla Jones reacts after draining a 3-point basket against Kansas State in the second round of the NCAA tournament in Raleigh on Monday. (Ben McKeown)

RALEIGH, N.C. -- Wes Moore admitted being a bit nervous about how North Carolina State might manage the emotions of playing for the final time on its home court.

Instead, the top-seeded Wolfpack used the moment to offer one last impressive show to the fans on the way to the NCAA women's tournament's Sweet 16.

Raina Perez and Diamond Johnson each added 15 points for the Wolfpack (31-3), who used a dominating second-quarter performance to earn a 12th straight win. N.C. State shot 55% and made 9 of 19 3-pointers, romping to a 35-point lead at one point in an emotional finale at Reynolds Coliseum.

"I think they just go out and play," Moore said. "They love playing the game and they play so well together and they just get lost in the moment, and don't think too much."

By the end, all 13 players who entered the game for N.C. State had scored. And they spent the minutes following the final horn standing at midcourt to take in the cheers and acknowledge the crowd before heading out to face Notre Dame.

The matchup of Associated Press second-team All-Americans Elissa Cunane of the Wolfpack and Ayoka Lee of the Wildcats never truly materialized because of foul issues. But the Bridgeport Region's headliner instead showed off its deep roster by getting production off the bench and continuing to roll anyway.

Camille Hobby provided a tough performance off the bench in relief of Cunane, scoring eight first-half points while avoiding picking up cheap fouls defending Lee. And that helped the Wolfpack stay on course, leading to a 12-0 burst that began with Lee on the bench.


"Coach Moore always talks about just being ready," Hobby said. "I was ready for that moment. At practice, it's what we do every single day."

N.C. State ran out to a 31-15 lead on Johnson's transition 3-pointer followed by Perez's jumper with 5:29 left before halftime, while Kansas State managed just one basket during a 10-minute stretch. That lead reached 20 before halftime and the ninth-seeded Wildcats never got closer than 13 in the second half.

"I think Wes has got the depth, the offense, to score with anybody in the country," Kansas State coach Jeff Mittie said.

Freshman Serena Sundell scored 17 points to lead Kansas State, which was trying to reach the Sweet 16 for the first time since 2002. But the Wildcats shot just 39% and made 7 of 25 3-pointers.

The Wildcats scored on three of five possessions to open the game, then hit their long drought after Sundell''s layup for a 7-3 lead.

"We got off to a good start," Mittie said, "but part of that start, also the pace got away from us a little bit."


Cunane's early foul trouble aside, the final home game for the All-American as well as fifth-year seniors Jones, Perez and Kai Crutchfield couldn't have gone much smoother. That included each getting a curtain-call substitution in the final minutes to rousing cheers and a hug from coach Moore, the last being Crutchfield and Cunane - who had subbed back into the game briefly to get that chance - after Moore called a timeout with 2:03 left.

The 6-foot-5 Cunane headed to the bench less than 3 1/2 minutes into the game with her second foul and didn't play again before the break, finishing with four points in 13 minutes.

The 6-6 Lee needed a little longer to get her second before also taking a seat early at the end of the period. She finished with 12 points, well below her season average of 22.3, despite playing 31 minutes.

Hobby generally did a good job of keeping her off the glass, while Jones and other defenders sagged to help or hovered nearby.

"We knew there would be help," Lee said. "As a team, it was a matter of where to turn the ball and being on the same page, which I think we struggled. I think we did have some good looks, but it just was hard to get connected."

N.C. State's matchup with Notre Dame on Saturday comes against the only Atlantic Coast Conference opponent to beat the Wolfpack, who went 20-1 against league foes including a three-game run to a third straight ACC Tournament title. The Fighting Irish won 69-66 at home on Feb. 1 in the Wolfpack's last loss this season.
Report a correction or typo
Related topics:
sportsraleighmarch madnessncaanc state wolfpack
Copyright © 2022 ABC11-WTVD-TV/DT. All Rights Reserved - The Associated Press contributed to this report.
TOP STORIES
LIVE: Tornado warning for Durham, Wake, nearby counties
Homeless veterans get an assist from Durham's Rotary Club
Truck slams into NC woman's new home
SCOTUS makes it tougher for prisoners counsel was ineffective
Shelf cloud seen in Raleigh ahead of line of storms
New NC flood monitoring system ready for next big storm
Father puts 1,000 miles on his car to find specialty formula
Show More
Student says he was told not to mention 'Don't Say Gay' law in speech
Clayton police arrest man in shooting that injured 1
More than 75,000 pounds of baby formula lands in US amid shortage
Report: Top Southern Baptists stonewalled sex abuse victims
Arby's is selling a fast-food staple it's never offered before
More TOP STORIES News