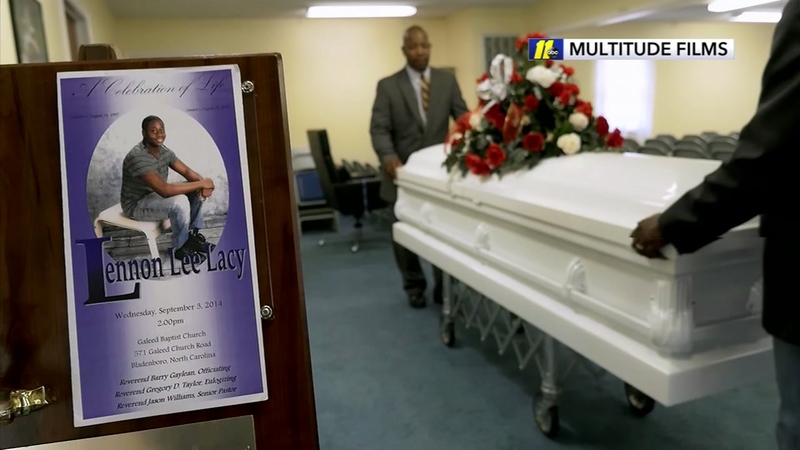 BLADENBORO, N.C. (WTVD) -- It's been five years since 17-year-old Lennon Lacy was found dead hanging from a swing set in Bladen County. The racially-charged case drew international headlines as family members and activists insisted Lacy's death was no suicide -- it was a lynching.

Now comes this brand new documentary, "Always in Season," premiering this week at the prestigious Sundance Film Festival; and Lacy's mom is going to be there.

As Claudia Lacy packed her bags for an early-morning flight to Utah, we asked her why people need to see this film that Filmmaker Magazine has called one of the 50 most-anticipated American Films in 2019.

"Because it tells the truth," she said. "It tells the story past what happened ... things that have been hidden that have come to light."

Five years after 17-year old Lennon Lacy’s hanging death in Bladenboro, a documentary exploring the case and the history of lynching in the south premiers this week at #SundanceFilmFestival
We’re talking to Lennon’s mom tonight before she flies to Utah for the film. #abc11 pic.twitter.com/Q2Gmj2fwWx

Director Jacqueline Olive's film digs into the Lacy case by documenting Claudia Lacy's search for justice after her son's lifeless body was discovered with little answers as to why.

The film weaves the Lacy case around the history of lynching and racial terrorism in the South.

Claudia Lacy said she believes her son was murdered because his girlfriend was white -- and that local law enforcement covered it up.

"It was not a suicide, it was hanging," she said. "It was meant to send a message: you are not to cross racial lines. This is not right. That's why I pursued it the way I did. God gave me the insight to know to push it, there's something else here."

"This is not just about a death, it's about a culture," Muktarian said.

And while Lacy heads to Sundance, the prestigious film festival founded by Robert Redford's Sundance Institute, Muktarian is preparing for a trip to Washington -- to pressure lawmakers and the FBI to take another look at the case.

"We'll be going to ask for a reopening of the investigation," Muktarian said. "We have new evidence and we would like to present it. Because we don't believe it's over until it's over."