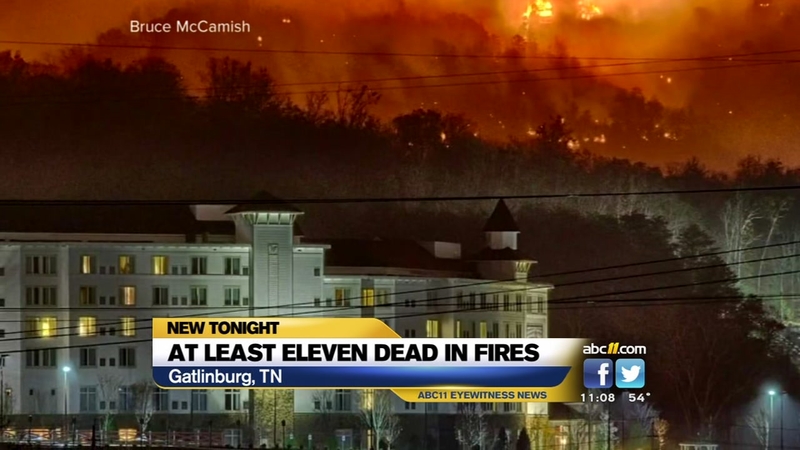 At least 11 dead in wildfires

GATLINBURG, Tenn. -- Emergency officials say the death toll from Tennessee wildfires this week has risen to 11.

Crews earlier discovered the remains of three more people as they searched the rubble of wildfires that torched hundreds of homes and businesses near the Great Smoky Mountains, and discovered a fourth death later Thursday in Sevier County.

Tennessee Gov. Bill Haslam has declared a state of emergency to expedite aid to victims of the wildfires and storms ravaging eastern Tennessee.

The Republican governor on Tuesday suspended certain state laws and eased other requirements to help victims of the storms.

He gave the commissioner of Commerce and Insurance discretion to assist policyholders even when premium payments have been delayed, and waived fees for the issuance of driver's licenses and other identification for victims of the disasters. His order freed up medical professionals licensed in other states to help Tennessee victims.

Authorities set up a hotline for people to report missing friends and relatives, and after following up on dozens of leads, they said many of those people had been accounted for. They did not say whether they believe anyone else is still missing or may have died.

"I think it's fair to say that the search is winding down," Sevier County Mayor Larry Waters said. "And hopefully we will not find any more."

He said the searches would likely be completed Friday.

Nearly 24 hours of rain on Wednesday helped dampen the wildfires, but fire officials struck a cautious tone, saying people shouldn't have a false sense of security because months of drought have left the ground bone-dry and wildfires can rekindle.

The trouble began Monday when a wildfire, likely caused by a person, spread from the Great Smoky Mountains National Park into the tourist city of Gatlinburg as hurricane-force winds toppled trees and power lines, blowing embers in all directions.

More than 14,000 residents and visitors in Gatlinburg were forced to evacuate, and the typically bustling tourist city has been shuttered ever since. At least 700 buildings in the county have been damaged.

Starting Friday, homeowners, business owners, renters and lease holders will be allowed to go see most of their Gatlinburg properties, said City Manager Cindy Cameron Ogle. The city is hoping to open main roads to the general public on Wednesday.

There were other signs of recovery. Waters declared that Sevier County was "open for business." In nearby Pigeon Forge, the Comedy House rented an electronic billboard message that said it was open for laughs, and a flyer at a hotel urged guests to check out the scenic Cades Cove loop. "Take a drive and remember what you love about the Smokies!" the flyer said.

Great Smoky Mountains National Park Superintendent Cassius Cash has said the fires were "likely to be human-caused" but he has refused to elaborate, saying only that the investigation continues. Agents from the Bureau of Alcohol, Tobacco, Firearms and Explosives are helping investigate the cause.

About 10,000 acres, or 15 square miles, burned inside the country's most visited national park. Another 6,000 acres were scorched outside of the park.

One of the victims was identified as Alice Hagler. Her son Lyle Wood said his mother and brother lived in a home at Chalet Village in Gatlinburg and she frantically called his brother Monday night because the house had caught fire. The call dropped as Wood's brother raced up the fiery mountain trying to get to his mother. He didn't make it in time.

"My mom was a very warm, loving, personable person. She never met a stranger. She would talk to anybody," Wood said.

Authorities said they were still working to identify the dead and did not release any details about how they were killed.

Three brothers being treated at a Nashville hospital said they had not heard from their parents since they were separated while fleeing the fiery scene during their vacation.

A number of funds have been established to help victims of the wildfires, including one set up by the Community Foundation of Middle Tennessee and another by country music legend and native Dolly Parton.

The flames reached the doorstep of Dollywood, the theme park named after Parton, but the park was spared any significant damage and will reopen Friday.

About 240 people stayed overnight in shelters, including Mark Howard, who was flat on his back in the hospital with pneumonia when the wildfires started. He called 911 when he heard his house was consumed.

"I had no insurance. It's a total loss," the 57-year-old owner of a handyman business said.

The Asheville Citizen-Times reports the U.S. Forest Service said Thursday that the Clear Creek fire northwest of Marion and the Horton fire in Watauga County are both 95 percent contained. Officials said three other wildfires still active Thursday showed no growth.

The forest service said more than 3 inches of rain recently fell at both locations, helping to extinguish hot spots and provide short-term relief.

The N.C. Department of Air Quality has issued a Code Green status for most of the state, with Code Yellow conditions remaining in several counties near wildfires. Burning bans remain in effect for several western counties.