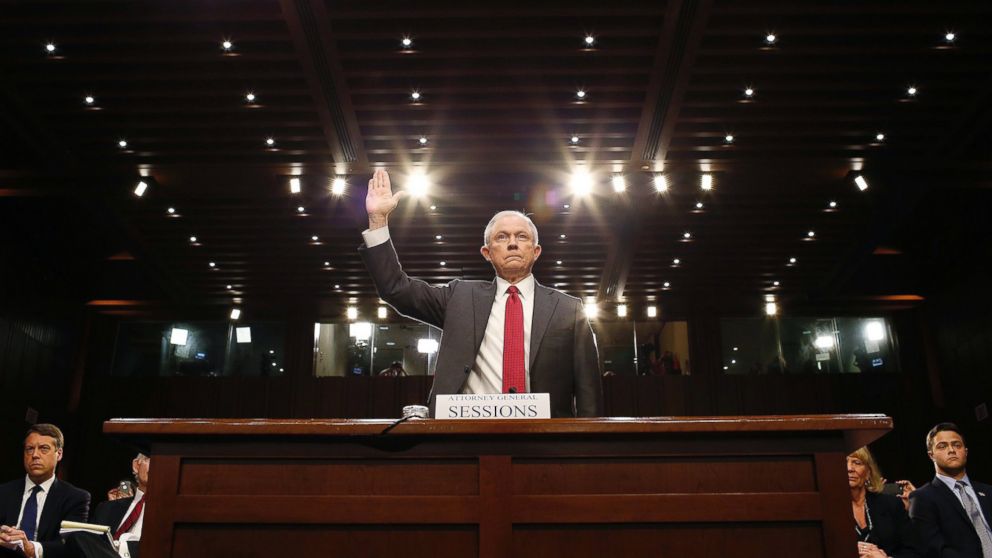 Attorney General Jeff Sessions on Tuesday afternoon issued a sweeping denial of any personal involvement in Russian interference in the 2016 presidential campaign, calling accusations that he even discussed such an effort with officials from that country an "appalling and detestable lie."

"I have never met with, or had any conversation with, any Russians or any foreign officials concerning any type of interference with any campaign or election in the United States," Sessions told the Senate Intelligence Committee. "Further, I have no knowledge of any such conversations by anyone connected to the Trump campaign."

The comments came as Sessions testified about his meetings with Russian Ambassador to the U.S. Sergey Kislyak and any discussions he had with the president before former FBI director James Comey was fired.

Throughout the testimony, which is addressing several of the controversies that have followed Sessions from his tenure as a U.S. senator from Alabama to his position as the head of the Department of Justice, the attorney general pushed back against suggestions that he engaged in additional meetings with Kislyak or committed perjury during his confirmation hearing.

President Trump, apparently, was pleased with his performance. Principal Deputy White House Press Secretary Sarah Huckabee Sanders told reporters Tuesday that the president "wasn't able to watch much of [Sessions' testimony]... but what he did see, what he heard, he thought that Attorney General Sessions did a very good job, and in particular, was very strong on the point that there was no collusion between Russia and the Trump campaign."

Sessions' decision to recuse himself from the Russia investigation

The attorney general explained that he met with "a senior ethics official" at the Justice Department in February as press reports emerged questioning his involvement in the investigation, given his role in Trump's campaign. Sessions said that from that moment, until the announcement of his recusal on March 2, he "did not access any information about the investigation."

"I have no knowledge about this investigation as it is ongoing today beyond what has been publicly reported," said Sessions, who later explained that he never received a briefing or read the reports on the intelligence community's conclusion that there were attempts to meddle in the election.

Sessions said that the move to step away from oversight of the probe was not because of his actions or meetings with the Russian ambassador; instead, he pointed to his position as chair of the Trump campaign's national security committee.

"I recuse myself not because of any asserted wrongdoing or any belief that I may have been involved in any wrongdoing in the campaign, but because a Department of Justice regulation... required it," said Sessions. "That regulation states in effect that department employees should not participate in investigations either came pain if they served as a campaign adviser."

In a heated moment, Sen. Ron Wyden, D-Ore., referred to part of Comey's testimony in which he said that he and members of the FBI leadership team did not discuss Trump's alleged request for the FBI director's loyalty, as the group believed Sessions would inevitably recuse himself from the Russia investigation.

"We also were aware of facts that I can't discuss in an open setting that would make his continued engagement in a Russia-related investigation problematic," Comey said last week.

"What are [those facts?]" Wyden asked Sessions on Tuesday.

"Why don't you tell me? There are none, Senator Wyden. There are none," said Sessions, raising his voice. "I can tell you that for absolute certainty... this is a secret innuendo being leaked out there about me, and I don't appreciate it, and I tried to give my best and truthful answers to any committee I've appeared before, and it's really people sort of suggesting innuendo that I have been not honest about matters, and I've tried to be honest."

Confirmation that Comey shared concern about communications with Trump

Sessions further confirmed that Comey "expressed concern about the proper communications protocol with the White House and with the president."

Last week, Comey appeared before the same committee and shared that Sessions was among a group of people asked to leave the Oval Office ahead of a conversation in which Trump told Comey he hoped he could let go of the investigation into former National Security Adviser Michael Flynn. Comey said he later told Sessions about the dialogue, and asked that he "prevent any future direct communication" between Trump and himself.

In his testimony, Comey said that Sessions did not respond to the grievance, a fact that Sessions disputed Tuesday. The attorney general indicated that he agreed with the former FBI director on the matter.

"I responded to his comment by agreeing that the FBI and the Department of Justice needed to be careful to follow department policies regarding appropriate contacts with the White House," said Sessions. "Mr. Comey had served in the department for better than two decades, and I was confident that he had understood and would abide by the well-established rule."

Comey further claimed that he and members of the FBI leadership team did not discuss Trump's alleged request for the FBI director's loyalty as the group believed Sessions would inevitably recuse himself from the Russia investigation.

Circumstances that led to Comey's firing

In May, Sessions and Deputy Attorney General Rod Rosenstein each submitted letters to Trump ahead of his firing of Comey from his FBI post. The president cited the letters as recommendations for Comey's dismissal that were "accepted," but later noted that he made the decision himself, and was thinking about the Russia investigation when he came to the conclusion the director should be terminated.

Sessions said that he was "not sure what was in [Trump's] mind" when he and Rosenstein spoke to him about Comey's firing last month, and repeatedly declined to comment on specific details about his communication with the president.

After Sen. Susan Collins, R-Maine, suggested that he should have "stayed out of the decision" to fire Comey -- in light of the FBI's Russia investigation and his own recusal -- Sessions expressed that he was fulfilling his duty.

Sessions also expressed his agreement with the rationale given by Rosenstein in his letter to Trump -- that Comey's handling of the investigation of Hillary Clinton's use of a private email server was improper.

"I know that was a great concern to both of us... that represented something that I think most professionals in the Department of Justice would totally agree that the FBI investigative agency does not decide whether to prosecute or decline criminal cases," said Sessions.

Accusations of perjury during confirmation hearing

Sessions told Sen. Al Franken, D-Minn., in January that he "did not have communications with the Russians," in response to a question about what action he would take if evidence of such communication by the Trump campaign was uncovered. It was later revealed that Sessions met with Kislyak on at least two occasions -- meetings he has differentiated by noting they came in the course of his duties as a senator, not as a surrogate of the campaign.

"[Franken] asked me a rambling question that included dramatic, new allegations," said Sessions, later adding, "My answer was a fair and correct response to the charge as I understood it. It simply did not occur to me to go further than the context of the question and list any conversations I may have had with Russians in routine situations, as I had with numerous other foreign officials."

Trump, Sessions and Kislyak at the Mayflower Hotel

The notion of a third meeting with Kislyak at the Mayflower Hotel in April 2016 was strongly denied by Sessions, who acknowledged they both attended then-candidate Trump's speech at the hotel, but said he "did not have any private meetings," nor "recall any conversations with any Russian officials at the Mayflower Hotel."

"I understand he was there. And so I don't doubt that he was," said Sessions, as he was questioned by committee Chairman Sen. Richard Burr, R-N.C. "I believe that representation is correct. In fact, he I recently saw a video of him coming into the room."

"But you never remember having a conversation or meeting with Ambassador Kislyak?" asked Burr.

In later questioning by Sen. Roy Blunt, R-Mo., Sessions added, "I didn't have any formal meeting, I'm confident of that, but I may have had an encounter during the reception."

Rosenstein pledges "independence" for Mueller, sees no evidence for firing

Earlier Tuesday, Deputy Attorney General Rod Rosenstein testified that he has not seen evidence of good cause to fire special counsel Robert Mueller, whom he appointed in May to lead the inquiry into Russian interference in the 2016 presidential election, including any possible collusion with Trump campaign associates.

Rosenstein appeared before the Senate Appropriations Committee at a hearing originally scheduled to be attended by Sessions. After learning that members of the appropriations committee intended to ask him questions about the Russia investigation, Sessions notified the House and Senate committees' leadership that he would be changing his schedule because "the Senate Intelligence Committee is the most appropriate forum for such matters."

The deputy attorney general assured the Senate Appropriations Committee that Mueller will have "full independence."

"The chain of command for the special counsel is only directly to the attorney general, or in this case, the acting attorney general, so nobody else in the department would have the authority to do that, and you have my assurance that we are going to faithfully follow that regulation and Director Mueller is going to have the full degree of independence that he needs to conduct that investigation appropriately," said Rosenstein.

Though he's the deputy attorney general, Rosenstein would have the authority to fire Mueller since Sessions recused himself in March from any probes related to campaigns for the presidency, like the Russia investigation.

When asked if he would fire Mueller if Trump ordered him, Rosenstein said, "I am not going to follow any orders unless I believe those are lawful and appropriate orders."

Rosenstein added that if there were a good cause, he would consider firing the special counsel. However, if there were not "good cause" to get rid of Mueller, Rosenstein said, "It would not matter to me what anybody says."