Why Upheaval in Burkina Faso Matters to US National Security 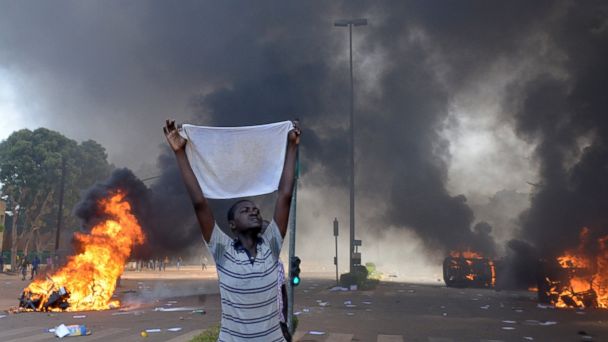 In a surprise announcement, the leader of the African nation of Burkina Faso said today he will end his nearly three decade rule -- marking a victory for thousands of angry protesters but prompting some uneasiness inside the U.S. national security community, which sees the tiny West African nation as a "key ally" in anti-terror operations in the region.

"The location of Burkina Faso is strategic, if you look at the other sides of it," a U.S. official told ABC News today. "It's an important, strategic place for CT [counter-terrorism] efforts and it's one of those places that needs to be calm."

One of the world's poorest countries, Burkina Faso sits in West Africa between the two operational zones of two major terrorist organizations - al Qaeda in the Islamic Maghreb (AQIM) in Mali to the north, and Boko Haram in Nigeria to the east.

As such, the government of Burkina Faso -- like its neighbor Niger -- previously agreed to allow American spy planes and drones to operate from its airfields, according to a 2012 report by The Washington Post. The Post called Burkina Faso's capital Ouagadougou a "key hub of the U.S. spying network" in the region, from which the U.S. conducted a surveillance mission code named Creek Sand out of a small air base built on to the international airport there.

In its 2013 Country Reports on Terrorism, the State Department said Burkina Faso was a "strong U.S. security and defense partner in the region" and said that that year, the government "aggressively undertook measures to combat the regional danger posed by terrorist organizations."

"The Government of Burkina Faso has recognized the importance of regional stability as an element in the fight against terrorism," the State Department said.

With today's announcement from Burkina Faso's longtime leader Blaise Compaore, the U.S. may have lost a somewhat reliable, personal partner in power.

"He [Compaore] is a guy that we've sort of been able to work with to help with some of the issues in the region, in terms of being able to use Burkina strategically to counter the unsavories in the neighborhood," the U.S. official said. "This change is a change that [the U.S. government] is going to have to contend with."

In 2013, Gilles Yabi, the International Crisis Group's West Africa Project Director, said that Compaore and "his men [had] succeeded in positioning themselves as indispensable mediators in the resolution of regional crisis."

Yabi said that "turmoil in Burkina Faso" could mean the loss of a "key ally and strategic base" for the U.S. and France, according to the International Crisis Group's website. France has also undertaken expansive counter-terror operations in north Africa, including a major operation in Mali in 2013.

However, the U.S. official didn't see the political change in Burkina Faso as necessarily having much of an impact on American counter-terrorism operations there. After all, in return for allowing U.S. to conduct its missions from Burkina Faso, the U.S. supports the country's own anti-terror and border security operations.

For instance, in 2013 "U.S. assistance facilitated the establishment of a 1,000-person border security task force and the training and equipping of a military counter-terrorism unit," according to the State Department report.

It's the kind of help -- along with millions of dollars yearly in foreign aid -- that the U.S. is counting on Burkina Faso needing, whoever is in charge.

"The military leaders, the transitional leaders don't want what is going on in the neighborhood to spill over to Burkina Faso," the U.S. official said. "It doesn't appear at this moment that the new transitional government would seek to turn a shoulder to the U.S. or any Western partner."

Lt. Col. Vanessa Hillman, a spokesperson for the U.S. military's Africa Command which runs operations on the continent, declined to discuss American counter-terrorism operations in Burkina Faso, but she said the military is "keeping a close eye" on developments there.

While she said she doesn't "want to guess at what's going to happen," Hillman said the military is "hopeful" that the change of power won't affect Burkina Faso's posture towards American forces in the region.

"[Burkina Faso is] a key ally," Hillman said. "In a region that's so unstable at times, it's good to have an ally."