Father of slain ex-NFL player Will Smith Jr. not satisfied with killer's conviction 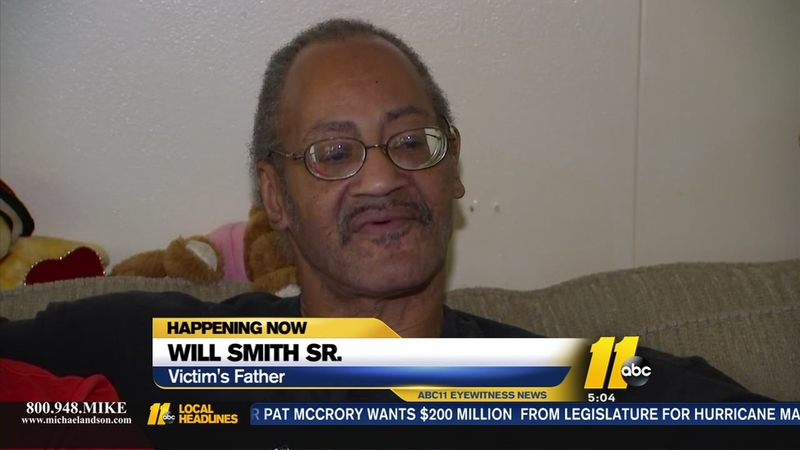 Will Smith Sr. speaks out after trial of son's killer

Hayes, 29, was found guilty Sunday of shooting Smith Jr. during a road-rage incident on April 9.

Will Smith Sr. says he plans to write a letter to the judge requesting Hayes get the maximum sentence of 40 years.

ABC11 asked Smith would he like to speak to Hayes in prison.

Will Smith Jr. is pictured in December 2015 with his wife and three children

Courtesy of Will Smith Sr.

Will Smith Jr. was 34. He was part of a Saints team that lifted the stricken city's spirits in the years after Hurricane Katrina hit in 2005.

Smith and his teammates helped carry the franchise to a winning season in 2006 and a Super Bowl victory four years later. His death stunned the community, even for a city in which residents are accustomed to reports of multiple gunfire deaths per week.

Smith Sr. said he forgives Hayes but is still frustrated at how the incident between his son and Hayes went down.

"Y'all got that kind of problem -- throw your hands up, get into a fight. Wipe the blood away and then go across the street and have a drink." Smith said.

The jury convicted Hayes of manslaughter rather than second-degree murder.

"He should have been convicted of second-degree murder, and he should spend the rest of his life in jail," Smith Sr. said.

Smith Sr. said his son's three children are still hurting. He hopes that while Hayes is in prison, he will think about the magnitude of his decision to kill his son.

"You understand that the actions you took on April 9 affected your family, my family and you ruined a lot of people's lives," Smith Sr. said. "If anything else happens in your lifetime while you're in jail, just remember this is what you paid for, for two minutes of anger."

Hayes could face time in prison for shooting Smith's daughter-in-law, Racquel. He was also found guilty of attempted manslaughter for injuring her in the incident.

Smith Sr. wants to carry on his son's legacy by taking on some of the charities and foundations his son actively led and worked on across the country.