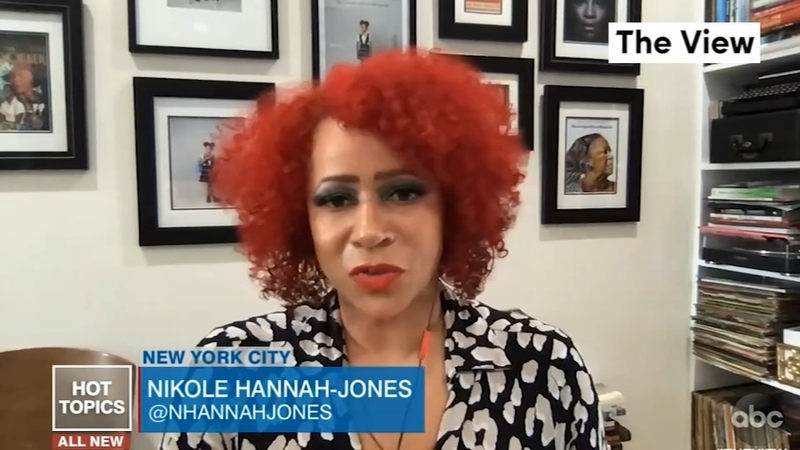 CHAPEL HILL, N.C. (WTVD) -- Award-winning journalist Nikole Hannah-Jones is considering legal action against the UNC Board of Trustees over the failure to give her tenure, according to a letter obtained by the News & Observer.

Some believe conservative politicians may be behind the effort to not grant Hannah-Jones tenure as UNC's Knight Chair at the Hussman School of Journalism and Media, tying it to her Pulitzer Prize winning work on the 1619 Project, which explores the history of Black Americans.

Hannah-Jones is set to join the faculty in the summer with a five-year, fixed-term contract, not including tenure, though previous Knight Chairs in the journalism school have been tenured.

Attorneys from the NAACP Legal Defense & Educational Fund, Inc., Levy Ratner PC, and Ferguson, Chambers & Sumter, P.A. said they are representing Hannah-Jones "in connection with the failure of the Board of Trustees (the "Board") to consider and approve her application for tenure," a letter to North Carolina lawmakers said.

"We are evaluating all available legal recourse to fully vindicate Ms. Hannah-Jones's rights, including possibly initiating a federal action against UNC, the Board, and/or affiliated entities and individuals," the letter said.

UNC-Chapel Hill also received a letter from attorneys representing Hannah-Jones, but leaders had no additional comment.

In an emailed statement to the News & Observer, Hannah-Jones said she retained legal counsel to "ensure the academic and journalistic freedom of Black writers is protected to the full extent of the law and to seek redress for the University of North Carolina's adverse actions against me."

"I had no desire to bring turmoil or a political firestorm to the university that I love," Hannah-Jones told the N&O, "but I am obligated to fight back against a wave of anti-democratic suppression that seeks to prohibit the free exchange of ideas, silence Black voices and chill free speech."