Campaigns go all out in final push to Election Day 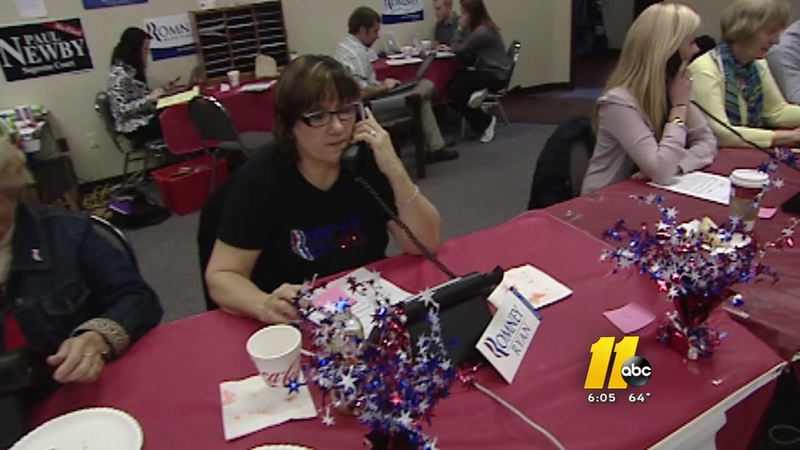 Campaign efforts ramp up as Election Day draws near

RALEIGH (WTVD) -- "What do you have to lose?" asks the inch-tall image of Donald Trump. The short commercial, produced by a Washington-based Democratic PAC, isn't something you'll see on TV though.

Much like a musical greeting card, this high-definition marketing push is arriving in the mailboxes of hundreds of North Carolina voters and being given out at events targeting millennials.

"It's so novel that people will pay attention to it," said Democratic consultant Brad Crone. And when the airwaves are flooded with political white noise, Crone said that can make all the difference.

Campaigns are doing everything they can in these last seven days before Election Day to get in front of voters and turn them out to vote.

"I have gotten text messages from Democrats texting me and saying to vote," said 19-year old Justin Lewis from Greensboro.

Lewis says he hasn't seen a piece of direct mail with his name on it but he's been getting text messages with increasing frequency. "It's just random text messages from 919 numbers."

Text messages are among the more simplistic approaches used by increasingly sophisticated campaigns.

"They've used big data to really target specific voters," Crone said, and he noted that the Clinton campaign has proven particularly adept at the technique.

"They're looking at consumer data and voting data, merging those lists and identifying people who weren't registered to vote but who could be likely Democratic voters," Crone said. "They went out, identified them, registered them, and now they're working to making sure they turn out."

Crone says cold calling - and cold knocking, for that matter - are things of the past as campaigns have grown increasingly savvy. At this point, he said, "the voters have been identified, they've been screened, they've been communicated with since the month of August; they know who those voters are, and they're in the process of turning them out."

Experts say that's the name of the game at this point: not persuasion, turnout.

"I have staff right now working on a race in Wayne County where we are taking all those who have early voted, marking them off our list and developing a mail list of voters who have not voted," Crone said. "So yes, even down to a superior court race, we are that sophisticated."

Aside from the newer and more creative methods of voter outreach, the campaigns are also heavily invested in more traditional kinds of messaging.

"Door to door," Crone said. "Just this morning, in my neighborhood on Ridge Road, there were Republicans out knocking on doors. I've had two Democrats knock on my doors. So a lot of door knocking. A lot of volunteers working telephones, calling Republican voters, Democratic voters, and independent voters, reminding them and urging them to be sure to go out and vote."

Of course, campaigns do run the risk of voter overload and most voters ABC11 talked to said they were ready for it all to be finished.

"It's all a bunch of jibberish to me," said Raleigh's Matthew Helfer, who said it makes him get "frustrated and turn it off."

But others said it's just the price to be paid for being a swing state.

"Because we're in a battleground state and it's so important here," said Mike Gould of Raleigh, "your vote is really going to have that much more importance. It's going to count more than maybe if you were in California or Massachusetts. This too shall pass. It's seven days."

Still, it's not going to let up for another seven days and at this stage for the campaigns, it all comes down to money.

According to the consultant, the former Secretary of State's campaign has a 5-to-1 money advantage in North Carolina and a 4-to-3 spending advantage if you take into account outside dollars. On TV, he says Clinton has a 4-to-1 advantage.

Crone estimates that between $25 million and $30 million have been spent on the presidential race in North Carolina.