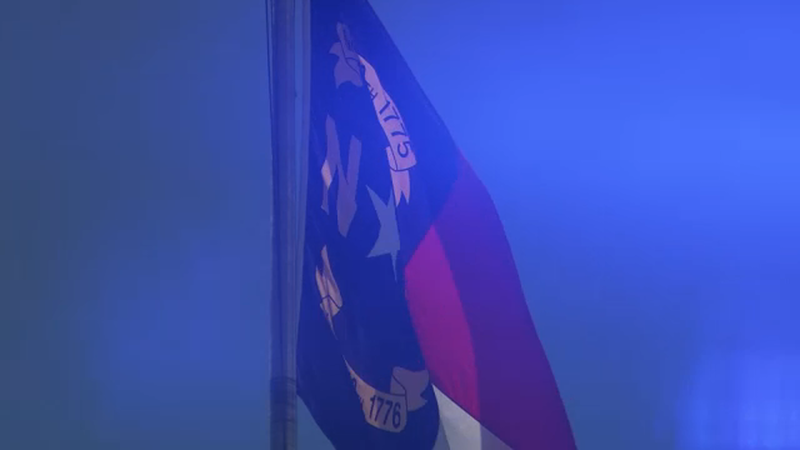 RALEIGH (WTVD) -- The North Carolina Sheriffs' Association released a 31-page report on Tuesday outlining recommendations to be implemented at departments across the state.

A 13-member Working Group was formed following the death of George Floyd and ensuing civil unrest.

The Association recognizes that some communities have lost confidence in law enforcement. To those individuals, the very few bad actors in our profession make it difficult to trust anyone who wears a badge. As sheriffs, the recommendations we make in this report are in an effort to create a law enforcement profession that will not tolerate racism and excessive force by law enforcement, and that will hold North Carolina law enforcement to a high standard. Sheriffs recognize the efforts we take now must be sustained in order to effect real change and that we must listen and be responsive to our personnel and the community about any issues among our ranks."

The report, a combination of suggested changes and a review of current policies, touched on a number of key issues. It called for banning chokeholds, strangleholds, and other restraint tactics that block blood flow and oxygen to the head and neck, similar to what was used during George Floyd's death.

"What the current process does not address is that officers that get in trouble at an agency, maybe right before recognizing that they're going to be held accountable, they resign and move on and then doesn't get followed up on. One of the key provisions in there is to ensure that those situations will be followed up on," said Eddie Caldwell, the Executive Vice President and General Counsel for the North Carolina Sheriffs' Association.

It further suggested enhanced mental health funding for the community.

"For a lot of folks that have mental illness, a more humane response would be to provide them with the services they need, rather than taking them into custody," said Caldwell.

He acknowledged that it would be beneficial for crisis counselors or mental health experts to accompany officers on calls involving a person undergoing a mental health episode.

"There are a lot of mental health needs out there among our citizens and in the communities. So one of the things in our report is we want adequate funding of the mental health system because a lot of folks that encounter problems with law enforcement or end up in the county jails that the Sheriff's supervise, it's because of mental illness," Caldwell said.

It also suggested, "responsibility for transportation for initial evaluation of an individual who is the subject of an (Involuntary Commitment Order) be shifted from law enforcement officers to mental health professionals of the local management entity (LME)."

In their review, they note that law enforcement officers in the state are underpaid, and shared their belief that adequate pay would "serve to recruit and retain talented individuals."

Dawn Blagrove, a community advocate and the Executive Director of Emancipate NC, was underwhelmed by the suggestions.

"This is a doubling down on protecting law enforcement and wrapping themselves within one another to insulate them against accountability," said Blagrove.

In fact, in examining what everyone would agree is deadly force (i.e., officer use of a firearm), current data collected by the SBI shows that in cases where a final disposition was reported to the SBI, of approximately 468 officer involved shooting investigations conducted from 2010 to present, none of the officers were found to have committed a violation of North Carolina criminal law. Ultimately, across all 100 counties, District Attorneys only sought criminal charges against four officers. Two of those cases were presented to a grand jury and no true bill was returned, one case resulted in a jury trial for voluntary manslaughter where the officer was found not guilty, and in one case, an officer was tried for voluntary manslaughter, the jury deadlocked, and the district attorney ultimately dismissed the case."

"That speaks to a problem to me. But what this report says, "We're doing everything okay." Because the SBI, which is an arm of law enforcement, doesn't find us to be in violation of use of force, and because the district attorneys that we elect all over the state of North Carolina never think that the police are at fault, so they don't ever bring criminal charges against them, that means they're doing everything okay. It is so tone-deaf and so in opposition to everything that we've heard from everyone all across America in the last six months in this country," said Blagrove.

Instead, Blagrove suggested departments cede some of their responsibilities.

"There is nothing in this policy that creates independent oversight for law enforcement, nor anything in these recommendations that support any of the things people who are calling for police accountability reform want to see or need," Blagrove said.

Caldwell disagreed with the characterization, noting psychological evaluations of officers would be done by medical professionals, not law enforcement. Further, he defended the officer-involved shooting investigations, saying the SBI is independent has an "exemplary reputation of doing an outstanding job of collecting the facts", and added that the District Attorney is an elected position accountable to the public, and grand jury findings would be heard by members of the community.

"The Sheriffs' Association through this document have once again proven to the people that the police cannot be left to police themselves," Blagrove said.

"These recommendations and others mirror some of the work of the Task Force on Racial Equity in Criminal Justice that we are co-chairing. We look forward to continuing to work alongside law enforcement and other policymakers to make North Carolina safer for all North Carolinians."

The following Sheriffs were members of The Working Group: