Twitter users tell Trump no one wants to leave Norway for the U.S. 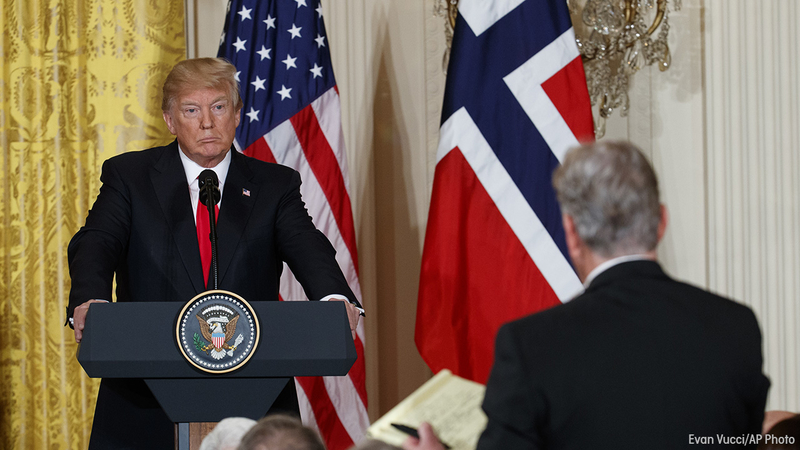 Social media: No one wants to leave Norway for the U.S.

President Donald Trump created a firestorm on Thursday with his vulgar comments saying he preferred immigrants from Norway as opposed to Haiti and "s***hole countries" of Africa.

On Friday morning the president said on Twitter that he used tough language during the meeting. In another tweet, denied saying anything derogatory about Haitians.

The language used by me at the DACA meeting was tough, but this was not the language used. What was really tough was the outlandish proposal made - a big setback for DACA!

Never said anything derogatory about Haitians other than Haiti is, obviously, a very poor and troubled country. Never said “take them out.” Made up by Dems. I have a wonderful relationship with Haitians. Probably should record future meetings - unfortunately, no trust!

Senator Dick Durbin, who was present at the meeting, went on record to confirm reports of Trump's comments saying, "He said these hateful things, and he said them repeatedly.

Henrik Heldahl, a commentator for the Norwegian political website Amerikansk Politikk, told the Associated Press that the sentiment would have been more welcomed if Trump used less coarse language for Haiti and African countries. He said it could have been a nice send off for Norwegian Prime Minister Erna Solberg, who visited the White House on Wednesday, "but the way he said it guarantees that the reaction here will be very negative."

"This says a lot about what Trump thinks it means to be an American," said Hilde Restad, an associate professor in international affairs in Norway and a former U.S. resident. "It is more about ethnicity than shared values."

She added that Norwegians generally didn't want "to be flattered by this U.S. president in this way."

People on Twitter were quick to condemn the president's remarks while pointing out Norwegians may not want to come to the United States. Norway was chosen as the happiest country in the world, according to the World Happiness Report 2017.

Why would people from Norway want to immigrate here? They have actual health care, and longer life expectancy.

People there must be clamoring to come to America.

Years ago a #Norwegian colleague moved back to #Norway with his American wife because they were ready to start a family and considered the U.S. too violent and dangerous a place to raise children. #shithole

I’m from Norway and I don’t understand it either. I love the US, but would never move to a country where guns are (sometimes) more valued then women and women’s rights.