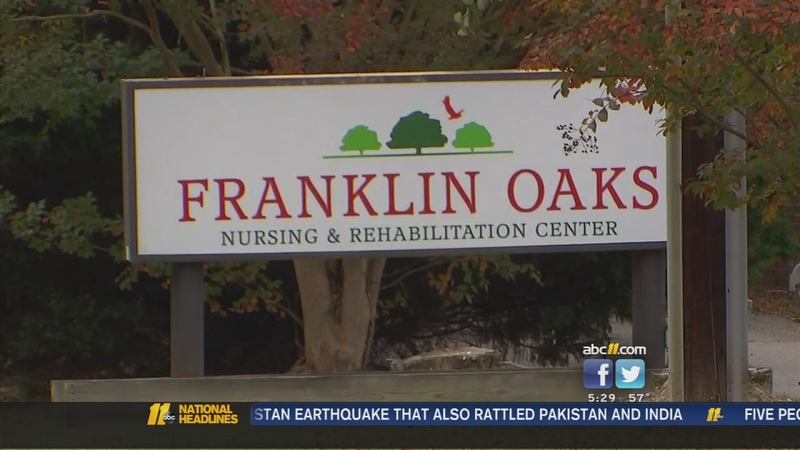 LOUISBURG, N.C. (WTVD) -- A Louisburg man is seeking justice for his mother who he said was sexually assaulted by a fellow resident in her nursing home.

Douglas Watkins is filing a complaint with the N.C. Division of Health Service Regulation against Franklin Oaks Nursing and Rehabilitation Center in Louisburg.

Louisburg police are investigating the incident that happened on October 16, but Detective Jason Abbott and District Attorney Mike Waters tell ABC11 they will not press any charges against the male resident because he suffers from profound dementia.

Watkins said he rushed to Franklin Oaks when he got word that his blind and bedridden mother had been assaulted around 6:30 p.m.

He said the male resident was in his wheelchair when he came into the room that Watkins' mother shares with another woman.

He said when the man rolled up to his mom's bedside and sexually assaulted her with his hands, she and her roommate yelled for help, according to Watkins.

Watkins said the staff member who came into the room saw the man assaulting her.

"If it happened once,I guess it could happen again" Son says mom was sexually assaulted at nursing home.@ABC11_WTVD pic.twitter.com/FxpXXizUlD

"I understand he's got dementia, well someone needs to be held accountable," said Watkins. "You can't just let something like this happen and sweep it under the rug."

Waters, the District Attorney for the Ninth District, said the nursing home reported the assault to police and its licensing agency and has been cooperating fully with law enforcement.

The facility holds an average overall rating with Medicare.gov.

Anytime complaints are filed with N.C. DHHS' Division of Health Service Regulation, officials carry out investigations at the facility, unannounced, to decide whether a deficiency should be cited.

In the last three years, eight complaints have been filed with N.C. DHHS against Franklin Oaks Nursing and Rehabilitation Center, but investigators never found any wrongdoing.