As 4 key players opt out, UNC prepares for Orange Bowl 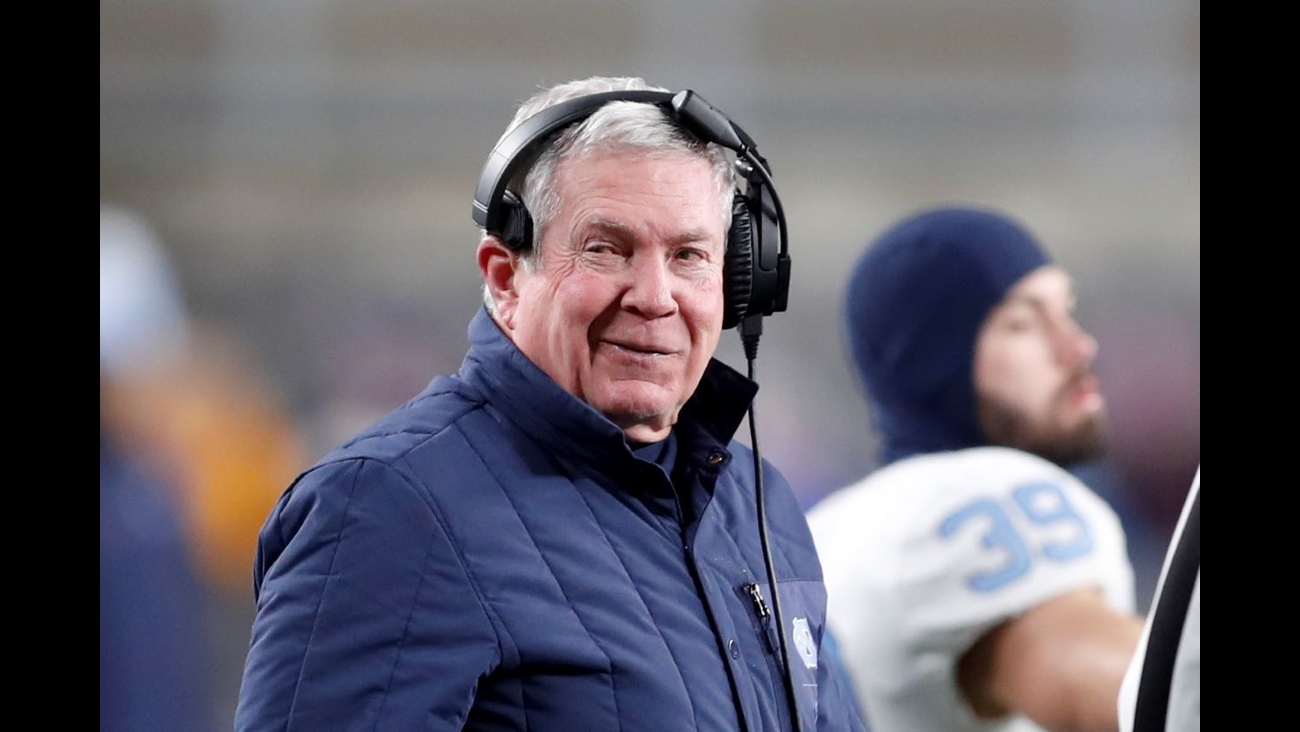 UNC coach Mack Brown is preparing his team to face Texas A&M without several of his key players, who have left the program to prepare for the NFL draft. (Keith Srakocic)

CHAPEL HILL, N.C. (WTVD) -- North Carolina continues to prepare for its Saturday Orange Bowl date with No. 5 Texas A&M. Tar Heels coach Mack Brown knew he would be without three of his stars and then this weekend a surprise as Javonte Williams, UNC's second-team All-American sledgehammer running back informed the staff that he also was going to opt out of that game and begin preparation for the NFL Draft.

"It seems to me that someone has advised them not to play in the ball game because they had such great games against Miami. And they really don't need to show themselves anymore and there's a possibility they could get hurt." Brown said Monday.

The stakes have changed. When it comes to bowl season for players with multimillion dollar NFL futures, it's just not worth the risk, even when it's a chance to compete in the Orange Bowl. While Brown would love to have his stars, he understands.

"Our job is to help all of these young players whether they were recruited by coach Fedora or brought in by us and help them have better options when they get through with their playing career here," Brown said. "These four young guys have done that."

Williams, Michael Carter, Dyami Brown and Chazz Surratt will all be cashing professional checks next year. That's thanks largely to their talents and hard work, but also speaks to their development at Carolina.

"Really, we should be celebrating the success that those four guys had because we wouldn't be in the Orange Bowl without them," Brown said. "They're great young people, they're all going to graduate from UNC and they represented our university and our team with class and with pride."

With their exits comes opportunity. Eugene Asante will step into Surratt's shoes at linebacker for the No. 14th-ranked Tar Heels. Defensive coordinator Jay Bateman was effusive about Asante's potential on Monday's call with reporters.

"I don't know if there was a better backup on our football team than Eugene Asante as far as like a guy that didn't play," Bateman said. "And you knew if he went in the game would play great. I mean every week, I'm just telling you, I can't wait to see this kid play. He's going to make a bunch of plays."

There's no getting around it, Texas A&M will not be getting the best version of UNC on Saturday. While that's understandably a disappointment for many, it's a price the program likely must get used to paying.

"We've also learned from this because this seems to be the norm now, so we're going to have people leaving every year. It'll probably hurt Saturday night, but it'll help long term," Brown said.

There is no bitterness, but Brown said once these players opted out of the bowl game, they're no longer a part of the program this season. They will not be traveling to Miami and do not really have anything to do with the team as they get ready to face the Aggies.
Report a correction or typo
Related topics:
sportschapel hilltexas a&m universitycollege footballunc tar heels
Copyright © 2022 WTVD-TV. All Rights Reserved.
TOP STORIES
Winter storm impacts reduced, shifted east
Gov. Cooper to speak ahead of NC winter storm
LATEST: Free N95 masks available in Wake County
Florida doubles down on anti-critical race theory legislation
'We can't get any more': Stores struggle to restock shelves
Essentials to keep in your car during winter storms
FBI issues new warning on QR codes
Show More
M&Ms' beloved characters are getting a new look
19-year-old military driver charged in wreck that left 2 Marines dead
Daniel Turcios shot 5 times after crash on I-440, RPD reports
Bob Saget's widow reflects on comedian's last days
Voting bill collapses, Democrats unable to change filibuster
More TOP STORIES News