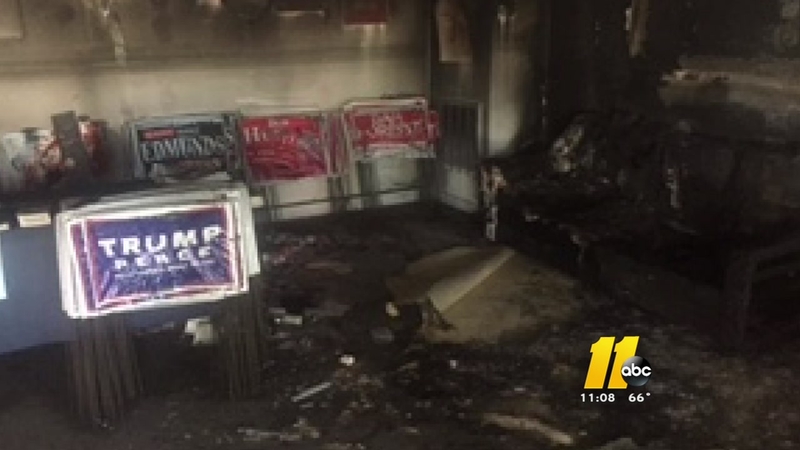 And Monday, night, the town's police chief took the unusual step of releasing a Q&A news release, calling the crime, "the sole focus of HPD investigators," and insisting his department's response time was immediate.

After getting a glimpse of the burned-out building, Monday afternoon, McCrory could not say who was to blame. But he seemed certain about the type of person who would do it."

McCrory toured the damage and spoke to media on Monday

"This is anarchy, this is an anarchist who did this," McCrory said.

Investigators believe that sometime between midnight and 9 a.m. Sunday, someone threw a bottle filled with flammable liquid through the front window of the Orange County Republican Party headquarters.

By Monday, GOP volunteers set up shop at a folding table outside their destroyed offices not far from where someone also scrawled "Nazi Republicans Leave Town Or Else" in spray paint on a nearby wall.

Hillsborough PD said federal agents with Alcohol Tobacco and Firearms were called in immediately -- arriving an hour after local police got to the scene.

Hillsborough Police Chief Duane Hampton pushed back against suggestions his officers initially treated the crime as mere vandalism, not something more serious after Sunday's call to 911.

"They obviously threw in something that was flaming through the window," an unidentified caller told a 911 dispatcher. "I'm not sure what damage is inside and I'm not about to go look."

In the midst of a contentious election cycle, the headlines in Hillsborough quickly made national news. McCrory appeared on Fox News Channel.

Meanwhile, Heinz Boss and other local residents stopped by the crime scene to drop off a donation to help rebuild.

"We can't have this stuff. This cannot happen, this is America. This is not a banana republic," Boss said.

And while state Republicans kicked off a fundraising for an arson relief fund, Democrats started their own campaign to help Republicans rebuild. The online effort surpassed a $10,000 goal in less than an hour.

"It's an important election, but it isn't so important you have to take lives or burn property or try to hurt other people," said Trevor Trout, a concerned resident.

Evidence gathered from the crime scene has been sent to the FBI's crime lab in Quantico. The police chief says the bureau is prioritizing the case. But, there's no timeline on when results will be released.