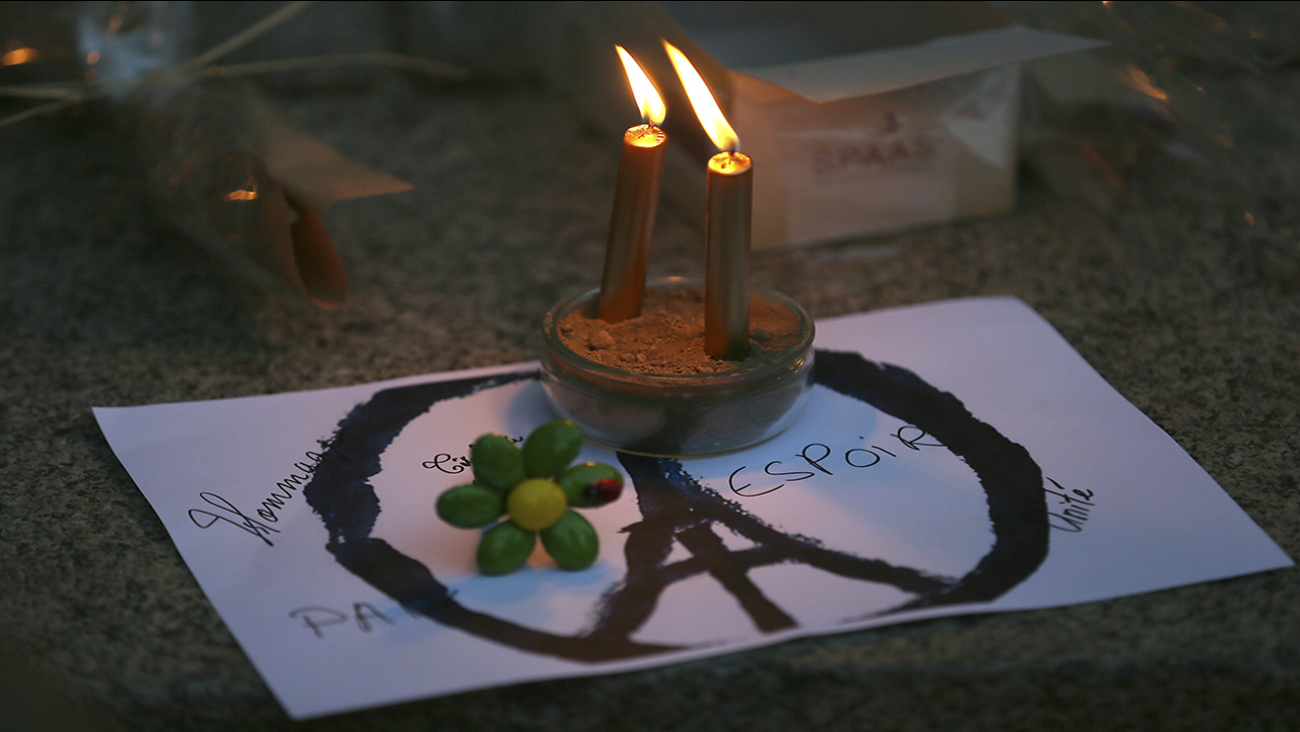 Candles are put on a peace sign combined with the Eiffel Tower at a temporary memorial for the victims of the Paris attacks in Rennes, western France, Saturday, Nov. 14, 2015. (AP Photo/David Vincent)

PARIS -- The Eiffel Tower stood dark in a symbol of mourning Saturday night as France struggled to absorb the deadliest violence on its soil since World War II: coordinated gun-and-suicide bombing attacks across Paris that left 129 people dead and 352 injured. Officials have confirmed an American student was among those killed.

Nohemi Gonzalez, an El Monte resident, was a junior studying interior design. She was in Paris attending the Strate College of Design as part of a semester abroad program.

Gonzalez was one of 17 CSULB students studying abroad at Strate, according to a school official, who also said the other 16 students are safe. The official added that Gonzalez was killed at one of the restaurant locations.

Molins said 99 of the injured were in critical condition after the "act of barbarism." He said the attackers in the Bataclan concert hall, where 89 people died, mentioned Syria and Iraq during their deadly rampage.

President Francois Hollande vowed that France would wage "merciless" war on the Islamic State group, which claimed responsibility for the mayhem, as investigators raced to track down their accomplices and uncovered possible links to networks in Belgium and Syria.

Grief, alarm and resolve spread across Europe on Saturday as officials raced to piece together information on the seven attackers. Officials said one was a young Frenchman known to the authorities. In addition, a Syrian passport found near the body of another attacker was linked to a man who entered the European Union through a Greek island last month. 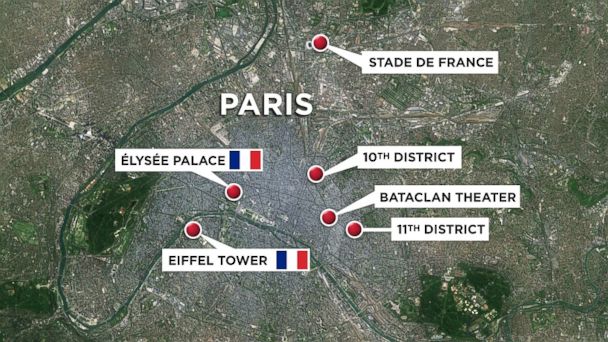 He said the attackers in the Bataclan concert hall, where 89 people died, mentioned Syria and Iraq during their rampage. Of the hundreds injured in the six attacks, 99 were in critical condition.

Seven attackers launched gun attacks at Paris cafes, detonated suicide bombs near France's national stadium and killed hostages inside the concert venue during a show by an American rock band - an attack on the heart of the pulsing City of Light.

PHOTOS: Tributes to Paris from around the world 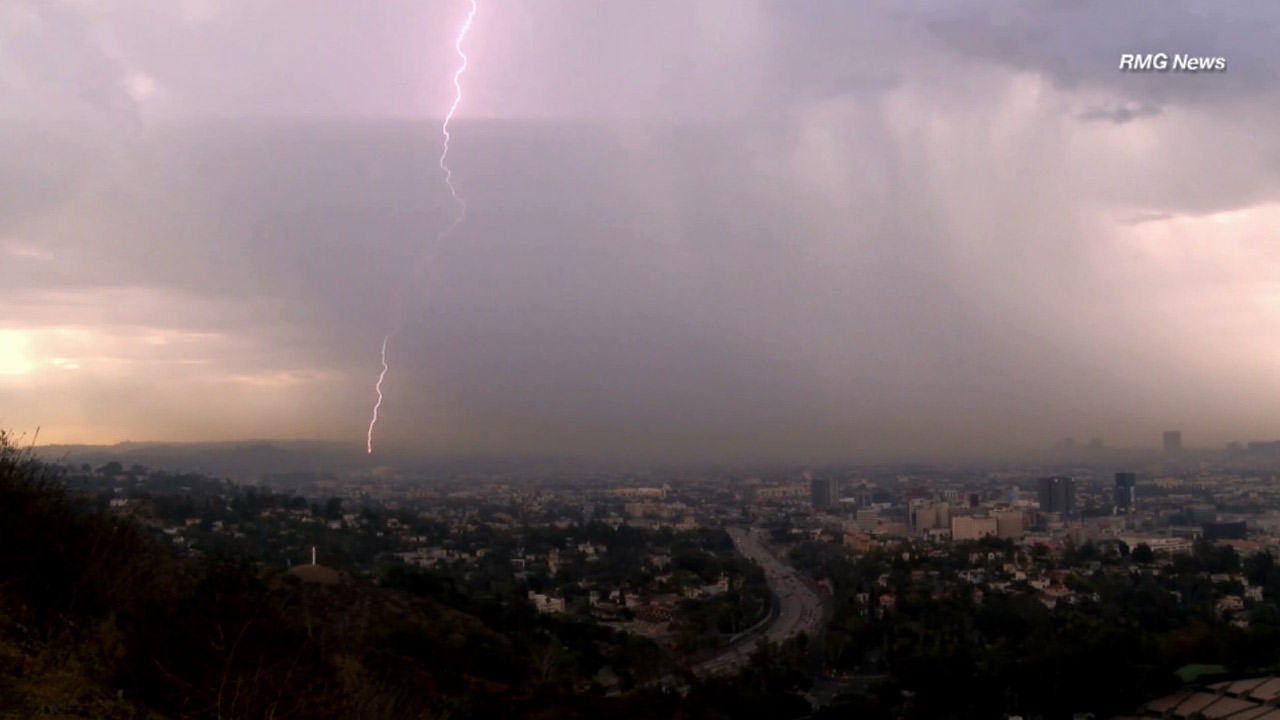 "These places are the places we visit every week," said Ahsan Naeem, a 39-year-old filmmaker who has lived in Paris for seven years. "Streets we walk every day ... All those places will have been full of my people. My friends. My acquaintances."

Late Saturday, a crowd of up to 250 people gathered for an impromptu candlelight vigil at the Place de la Republique, the site of a massive demonstration in the wake of the Charlie Hebdo killings earlier this year.

Adrien Chambel, a 27-year-old law student, said the crowd was much sparser than in January. "You feel that people are petrified," Chambel said.

Hollande, who declared three days of national mourning and raised the nation's security to its highest level, called the carnage "an act of war that was prepared, organized, planned from abroad with internal help."

The president said France would increase its military efforts to crush IS. He said France - which is part of a U.S.-led coalition bombing suspected IS targets in Syria and Iraq and also has troops fighting militants in Africa - "will be merciless toward the barbarians of Islamic State group."

The Islamic State group claimed responsibility in an online statement in Arabic and French circulated by supporters. It was not immediately possible to confirm the authenticity of the admission, which bore the group's logo and resembled previous verified statements from the group.

The statement mocked France's involvement in air attacks on suspected IS bases in Syria and Iraq, noting that France's air power was "of no use to them in the streets and rotten alleys of Paris."

Many of Paris's top tourist attractions closed down Saturday, including the Eiffel Tower, the Louvre Museum and the Disneyland theme park east of the capital. Some 3,000 troops were deployed to help restore order and reassure a frightened populace.

In Raleigh, the PNC Tower was lit up in the colors of the French flag.

The PNC Tower in #Raleigh is lit up in #redwhiteandblue in honor of the victims of the #ParisAttacks #prayforparis pic.twitter.com/XFibzx8jW7

In Washington, a crowd gathered outside the White House for a vigil near a statue of the Marquis de Lafayette, the French general for whom the park in front of the executive mansion is named.

In New York, the Empire State Building went dark for a second night in sympathy for people of Paris, while One World Trade Center was little with the colors of the French flag.

Interior Minister Bernard Cazeneuve announced that all public demonstrations would be banned until Thursday and local governments would have the option to impose nightly curfews.

The attacks, on an unusually balmy November Friday evening, struck at the heart of Parisian life: diners in cafes, concertgoers watching a rock band, spectators at a soccer match.

Paris Mayor Anne Hidalgo said the places attacked are ones Parisians love - and ones where they celebrate diversity.

"It is this Paris that was hit. Probably because this example of living together, which is so strong in our city, is unbearable for fanatical people," she said. 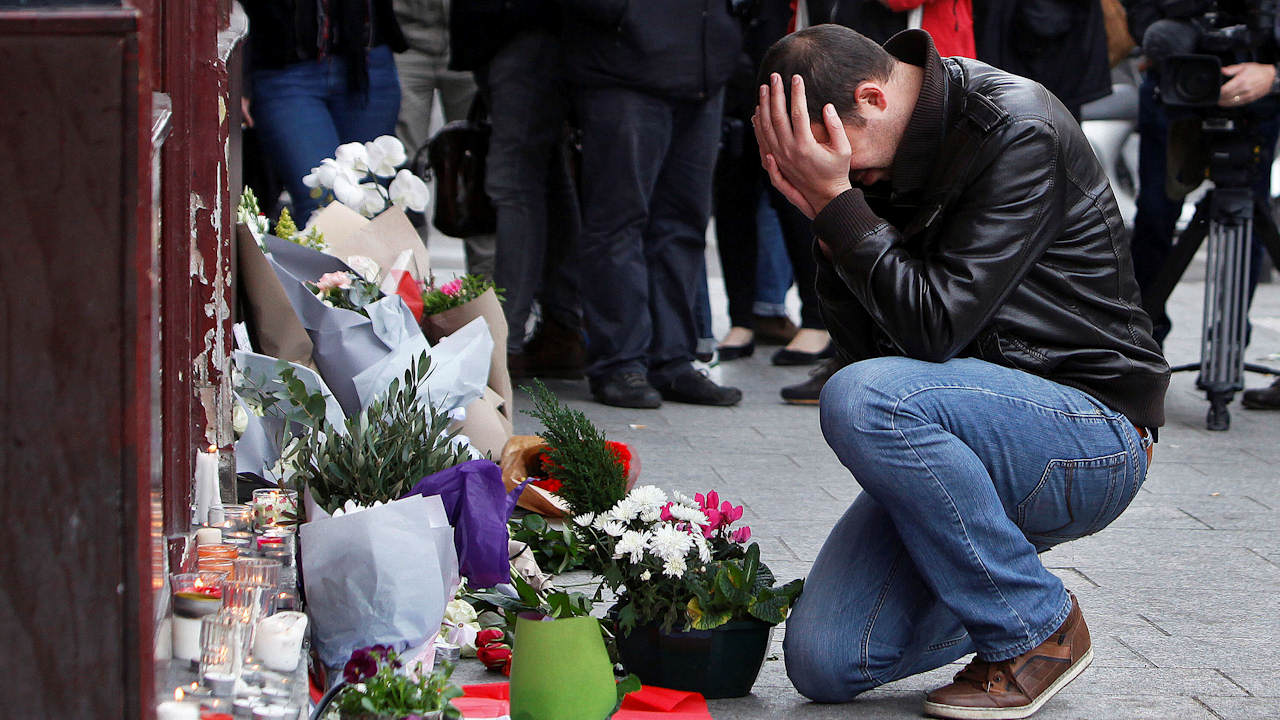 PHOTOS: Mourning the Paris victims
Photos from Paris, France and around the world as people mourning the loss of dozens in multiple terror attacks.

Parisians expressed shock, disgust and defiance in equal measure. Some areas were quiet, but hundreds queued outside a hospital near the Bataclan concert hall to donate blood. As a shrine of flowers expanded along the sidewalk, a lone guitarist sang John Lennon's peace ballad "Imagine."

Authorities in Belgium conducted raids in a Brussels neighborhood Saturday and made three arrests linked to the Paris attacks. Justice Minister Koen Geens told the VRT network that the arrests came after a car with Belgian license plates was seen close to the Bataclan theater.

Officials in Greece said the Syrian passport found in Paris had shown its owner entering in October through Leros, one of the islands that tens of thousands of people fleeing war and poverty in Syria and elsewhere have been using as a gateway into the European Union.

If the attack does involve militants who traveled to Europe amid millions of refugees from the Middle East, the implications could be profound.

Poland's prospective minister for European affairs, Konrad Szymanski, said that in light of the attacks, Poland would not comply with an EU plan to accept refugees unless it received "guarantees of security."

The attack brought an immediate tightening of borders as Hollande declared a state of emergency and announced renewed border checks. Germany also stepped up border checks.

Three suicide bombs targeted spots around the national Stade de France stadium, in the north of the capital, where Hollande was watching a France-Germany soccer match. Fans inside the stadium recoiled at the sound of explosions, but the match continued.

Around the same time, fusillades of bullets shattered the clinking of wine glasses in a trendy Paris neighborhood as gunmen targeted a string of crowded cafes.

The attackers next stormed the Bataclan concert hall, which was hosting the American rock band Eagles of Death Metal. They opened fire on the panicked audience and took members hostage. As police closed in, three detonated explosive belts, killing themselves, according to Paris police chief Michel Cadot.

Another attacker detonated a suicide bomb on Boulevard Voltaire, near the music hall, the prosecutor's office said.

Video shot posted by newspaper Le Monde Saturday captured some of that horror as dozens of people fled from gunfire outside the Bataclan.

At least one person lies writhing on the ground as scores more stream past, some bloodied or limping. The camera pans down the street to reveal more fleeing people dragging two bodies along the ground. A woman and two others can be seen clinging to upper-floor balcony railings in an desperate bid to stay out of the line of fire.

Le Monde said its reporter Daniel Psenney filed the scene from his apartment balcony, and was shot in the arm when he went downstairs to help someone who had collapsed.

A tall, sturdy 38-year-old concert-goer named Sylvain collapsed in tears as he recounted the attack, the chaos and his escape during a lull in gunfire.

"First I heard explosions, and I thought it was firecrackers," he said.

"Very soon I smelled powder, and I understood what was happening. There were shots everywhere, in waves. I lay down on the floor. I saw at least two shooters, but I heard others talk. They cried, 'It's Hollande's fault.' I heard one of the shooters shout, 'Allahu Akbar,'" Sylvain told The Associated Press.

He spoke on condition that his full name not be used out of concern for his safety.

The Paris carnage was the worst in a series of attacks claimed by the Islamic State in the past three days. On Thursday, twin suicide bombings in Beirut killed at least 43 people and wounded more than 200, and 26 people died Friday in Baghdad in a suicide blast and a roadside bombing that targeted Shiites.

The militant group also said it bombed a Russian plane that crashed in Egypt's Sinai Peninsula on Oct. 31, killing 224 people.

IS also suffered significant reversals this week, with Kurdish forces launching an offensive to retake the strategic Iraqi city of Sinjar and the U.S. military saying it had likely killed Mohammed Emwazi, the masked British-accented militant known as "Jihadi John" who is seen in grisly IS beheading videos.

France has been on edge since January, when Islamic extremists attacked the satirical newspaper Charlie Hebdo, which had run cartoons of the Prophet Muhammad, and a kosher grocery. Twenty people died in those attacks, including three shooters.

French authorities are particularly concerned about the threat from hundreds of French Islamic radicals who have traveled to Syria and returned home with skills to mount attacks.

"The big question on everyone's mind is: Were these attackers - if they turn out to be connected to one of the groups in Syria - were they homegrown terrorists or were they returning fighters?" said Brian Michael Jenkins, a terrorism expert.