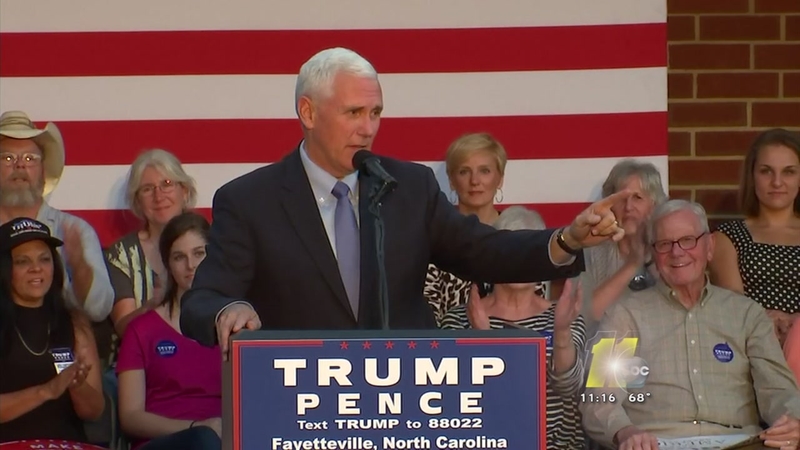 FAYETTEVILLE (WTVD) -- Indiana Gov. Mike Pence, the Republican nominee for vice president, visited the Tar Heel State on Tuesday exactly three week before the election with a clear message for supporters to help get out the vote.

"I want you to leave here tonight in Fayetteville with a burden of responsibility on your heart," Pence said to a crowd of about 250 people who gathered at K3 Enterprises for the rally. "The reason we are making a difference in this movement, the reason we are within a whisker of winning North Carolina is because people are talking to people."

Pence, who also visited Wilmington and Hillsborough on Tuesday, continued the campaign's assault on Hillary Clinton's role as secretary of state and the controversy surrounding her emails on a private server.

Indiana Gov. Mike Pence spoke at a Republican rally in Fayetteville on Tuesday.

In Hillsborough, Pence met with the volunteers who worked out of a GOP field office that was firebombed Sunday.

"To the perpetrators we simply say we will not be intimidated," Pence asserted.

Investigators have not identified any suspects or motive behind the attack.

Investigators believe that sometime between midnight and 9 a.m. Sunday, someone threw a bottle filled with flammable liquid through the front window of the building. A couch was set on fire and the inside of the office was heavily damaged

"An attack on our political system is an attack on us all," said Pence.

He urged anyone who might have information about who was responsible to come forward.

Pence's visit to North Carolina begins three days of visits by vice presidential candidates leading to the start of early in-person voting in the battleground state.

Democratic nominee Tim Kaine is expected to campaign with the state Democratic Party both on Wednesday and on Thursday, when early voting begins. Wednesday's early-vote event is in Asheville, with Thursday rallies slated for Charlotte and Durham.