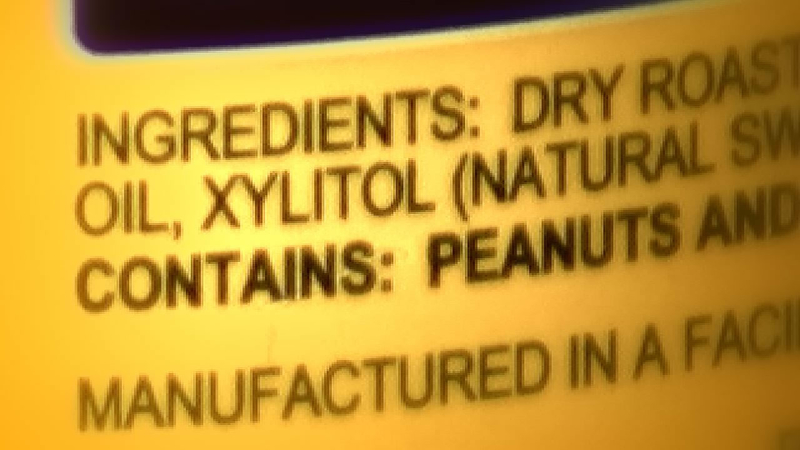 RALEIGH (WTVD) -- Pet owners beware, you might have a common food item in your household that is toxic to your pet. The popular sugar substitute xylitol is now showing up in more and more products, and sometimes it's hard to detect.

"My husband got home about two hours after we left and found the dog in great distress. She was having seizures and come to find out later she was in diabetic shock," Erin Nelson said.

Her husband immediately took Barley, their 85 pound Lab, to the vet.

"They were very concerned she wasn't going to make because of the seizures, because they were worried about lack of oxygen to the brain," Nelson said.

With Barley's health quickly deteriorating, the Nelson's searched their home to see if there was anything he could have gotten into.

Barley had eaten a pack of gum, specifically sugar-free gum, which contains the sugar substitute xylitol.

Click here more information about the effects of xylitol ingestion in dogs (.pdf)

The popular sugar substitute xylitol is now showing up in more and more products.

"He was at the vet and had told them that she had gotten into some sugar free gum and they immediately said that's what it was, that the gum probably had xylitol in it which is toxic for dogs," Nelson said.

Xylitol is completely safe for humans but can be deadly for animals, specifically dogs.

According to the ASPCA Animal Poison Control Center, the number of xylitol cases has increased every year.

A rep with the ASPCA Animal Poison Control Center said in 2014, of the serious cases that were reported to the agency, 11 resulted in death. But they added that number could be higher as they don't have conclusive data for all cases they work on as often the client is working with their local veterinarian and it's very common for the ASPCA Animal Poison Control Center not to know the outcome.

Dr. Steven Marks, of North Carolina State Veterinary School, said when a dog ingests xylitol it could result in seizures, liver damage and even death. While it is rare for dogs to eat gum, the sugar substitute is showing up in more products including peanut butter, baked goods, and candy.

"If you've left some baked good around that just happened to have xylitol in it you wouldn't know, which just happened to that young lady, and then you find out the hard way," Dr. Marks said.

But it is sometimes hard to spot xylitol on the food ingredient labels.

"They will often list it as something that doesn't say xylitol like alcohol sugars and xylitol is one of those so they will just list a total of those and there's other types," Marks said.

Pet owners should check food labels before giving anything to their pet. You should look for these ingredients which are synonyms for xylitol:

Barley is doing much better, but the vet told the Nelson's that they were very lucky.

"They told us that if our dog had been a small dog that she definitely would not be with us anymore. We are very lucky that she is an 85-pound dog and that's what saved her," Nelson said.

If your pet ingests the sugar substitute, the best advice is to get them to the vet right away.

Click here more information about the effects of xylitol ingestion in dogs (.pdf)