'We're in the building': Wave of historic congresswomen celebrate first day at work amid government shutdown 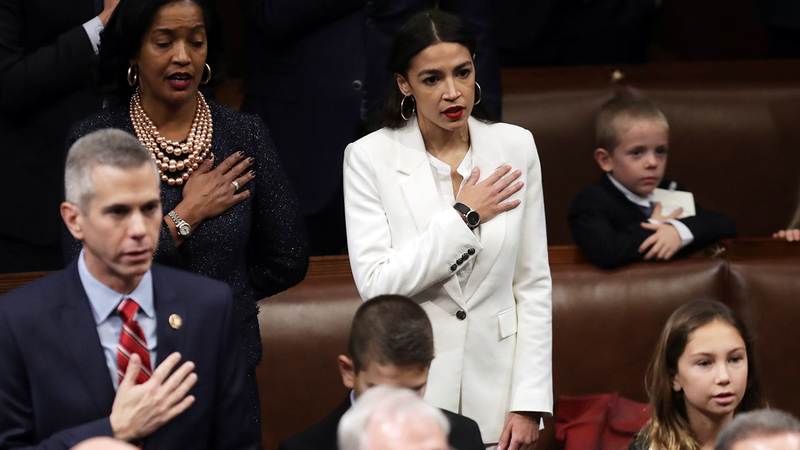 As Congress gets sworn in on Thursday, some congresswomen who made history in November are starting work.

In what some refer to as the "pink wave" on Election Day 2018, a record number of women were elected to Congress. For the House of Representatives, these women include the youngest woman ever to serve and the first two Muslim women to serve.

After taking the oath, the new Congress is faced with a daunting task: ending the standoff about funding for President Donald Trump's proposed border wall in order to end the government shutdown.

RELATED: 5 things to know about a government shutdown

In the U.S House of Representatives, where Democrats have a majority, Rep. Nancy Pelosi (D-CA) was elected as the Speaker of the House. Pelosi, who also led the House from 2007-2011, is the only woman to ever hold the position.

Here's a look at a few of the lawmakers who are making history as they take office.

At just 29, Rep. Alexandria Ocasio-Cortez (D-NY) is now the youngest congresswoman ever. The former waitress and community organizer, who upset the incumbent in the Democratic primary election, represents New York's 14th district.

"We're in the building," Ocasio-Cortez captioned a Vanity Fair photo showing herself and several other historic new members of Congress.

Rep. Ayanna Pressley (D-MA) is the state's first black woman in Congress. To celebrate her first day in office, Pressley praised other women taking office to represent Massachusetts at various levels of government.

Today #MA welcomed a new slate of bold leaders to usher in a wave of change across our commonwealth. Congrats to my #sistersinservice & #partnersingood @lizforma @nikaelugardo @rollins4DA @TeamTram @Jo_Comerford & to the other newly sworn in elected leaders. The work continues.

Rep. Veronica Escobar (D-TX) is representing Texas' 16th district. She is one of two women who are the first Latinas to represent Texas in Congress.

El Paso, thank you for this privilege — I’m very grateful for the opportunity to serve our beloved community and country. If you’re ever in D.C. please come visit YOUR #915 office. 🙏🏽🇺🇸 pic.twitter.com/1KFq5FHNOt

The other Latina congresswoman from Texas is Rep. Slyvia Garcia (D-TX), who is representing the state's 29th district in Houston. She celebrated ahead of her first day with a shirt that bore the phrase "La Congresista."

Guess what my new fave tee is this #TShirtTues? You betcha- La Congresista. Great way to start my new adventure. #CD29 #LaCingresista pic.twitter.com/tBdGuElWax

Rep. Ilhan Omar (D-MN) was one of the two first Muslim women to serve in Congress. On Thursday she called the new session of Congress "a new day in America."

23 years ago, from a refugee camp in Kenya, my father and I arrived at an airport in Washington DC.

Today, we return to that same airport on the eve of my swearing in as the first Somali-American in Congress. #Hope #Ilhan 🙏🏾 pic.twitter.com/jVeP3DOipN

Rep. Rashida Tlaib (D-MI) is also one of the first two Muslim women to serve in Congress.

"Screaming inside!" Tlaib wrote on Instagram. "Thank you for believing in me. Fighting for you will be an honor. #rootedincommunity #unapologeticallyMe"

It is an honor and a privilege to represent you, #KS03. Let’s do great work together. pic.twitter.com/rueUrotMsw

Sen. Krysten Sinema (D-AZ) narrowly defeated Republican Martha McSally in the Arizona senate race, but due to Sen. John McCain's death, they are both taking office as the state's first females to serve in the chamber. Sinema was sworn in first as the senior senator.

Happy New Year! We look forward to continuing our work for Arizonans in the new year. pic.twitter.com/vzGo9fRx2U

A series of events led Sen. Martha McSally (R-AZ) to become a senator after being defeated in a senate election. After McCain's death in August, Sen. Jon Kyl was appointed to his seat, but he only promised to serve until the end of 2018. With Kyl's resignation in December, Arizona Gov. Doug Ducey made an announcement that McSally would take over McCain's former seat until a special election can be held in 2020.

It has been an honor to serve AZ’s 2nd District over the past 4 years. I was constantly inspired by the people of Southern Arizona.

Tomorrow at noon, I’ll take the Oath of Office as a United States Senator. I look forward to advocating for our great state and all Arizonans.