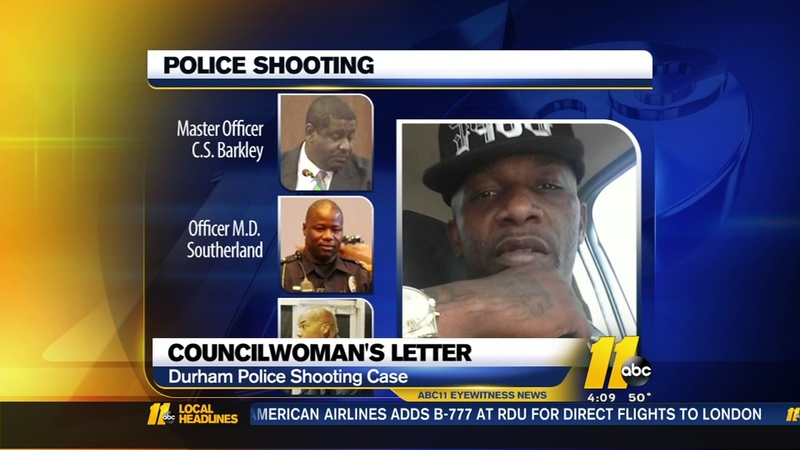 New call for firing of officers in Durham shooting

Johnson is raising concerns to see whether a second review of their personnel files warrants the firing of the officers.

On December 1, Johnson emailed a letter to city council and the city manager.

Portions of the letter stated:

"I'm struggling to understand why these officers were still employed by the Durham Police Department."

"I'm also scared because I'm sure these officers aren't the only ones with these sorts of histories that still work for DPD."

"I'd rather settle some lawsuits than have another person killed by our police department."

Johnson's concerns stem from the three officers' involvement in the recent shooting death of Clark.

DPD says Barkley shot Clark during a struggle with the officers after hearing a gun fired. Clark's family says the shooting was not justified. The SBI is still investigating.

In 2014, Barkley, Southerland and Goss were investigated by DPD for a complaint of excessive force involving two adults and one child.

The result of the internal review found the accusation of excessive force against Southerland was sustained, but it is not clear how he was disciplined.

Johnson's letter requests public transparency and another internal probe into the three officers past conduct.

ABC11 was unable to reach Johnson, but we spoke with Councilman Charlie Reece about the letter. He agrees with her assertions.

"I think Jillian raised a number of really important points in her email to the city manager and council," Reece said. "I think anyone that has read these press reports can't help but be concerned about the accounts that are out there about the history of the officers that were involved in the shooting death of Frank Clark."

But not everyone agrees. ABC11 spoke with Councilman Eddie Davis who says this is a personnel issue, and feels the officer's background should be released only if the police chief or the city manager thinks it's necessary for the public to know.

On Monday, after the city council meeting, Durham's city manager and city attorney will discuss Johnson's request in a closed meeting.