Who is Roy Cooper

That's a question Cooper's supporters and detractors will be trying to define for the next year. Here's our first take:

Roy Cooper was born in Nash County, NC in 1957. He went to UNC Chapel Hill and quickly stood out as a Morehead Scholar and president of the school's Young Democrats.

He was first elected to the state House of Representatives in 1986 and he's held public office ever since. He moved over to the state Senate in 1991, after then-Sen. Jim Ezell died in a car crash in Raleigh.

As a Senator, he made a name for himself as an advocate for government transparency, the expansion of Medicaid, and what would become the child health insurance program known as SCHIP.

Then in 2000, Cooper ran for Attorney General and won but the campaign would tee up a controversy that would dog Cooper for the next 14 years.

Cooper aired an ad alleging his opponent, Raleigh attorney Dan Boyce, had tried to overcharge taxpayers for a lawsuit he was working on. Boyce claimed to not have anything to do with the case and sued Cooper. Boyce repeatedly won in court, but Cooper kept the case alive with challenges and legal maneuvering.

The suit dragged on 14 years and was just settled in 2014. The terms of the settlement are unclear but expect this could come up again as Cooper chases the governor's seat in 2016.

As attorney general, Cooper's high water mark came in 2007 when he exonerated three Duke Lacrosse players who'd been falsely accused of rape. Cooper publicly and clearly declared their innocence, earning him accolades from both sides of the political spectrum.

Since then, Cooper's popularity and profile have slowly eroded. Tom Jensen, with the Democratic pollster Public Policy Polling, says a survey from 2008 showed Cooper with 44 percent approval, with only 34 percent of voters having no opinion at all. In a poll just a few weeks ago, that "no opinion" number had shot up to 49 percent.

"The story with Cooper," Jensen said, "is that you would assume in his fourth term as Attorney General, he'd have a much higher profile. In reality, average voters just don't know who he is and that will be both a challenge and an opportunity for him in this election."

And the 2012 elections didn't help. Republicans didn't challenge Cooper at all, which won him the seat, but meant he didn't have to campaign statewide. Jensen says that may take a toll in the run up to 2016.

What Cooper does have is the backing of the Democratic establishment.

"He's the last of the Hunt generation," said Meredith College Political Science professor David McLennan. "He's well known in base and should do well with traditional Democrats such as African Americans, liberals, and college educated voters."

But McLennan said 15 years as North Carolina's Attorney General will give opponents and detractors plenty of fodder.

"The basic charge from Republicans," said McLennan, "is that Cooper has been selective in choosing whether to defend the state. You can see the campaign ads already: 'Roy Cooper.. running for Governor instead of serving the state.' That's a big weakness."

"Given his high numbers in terms of a blank slate," McLennan continued, "he's got to talk about the issues. As attorney general, it's not his job to take stances on issues like education and Medicaid. The attorney general's job is defending North Carolina's constitution and prosecuting criminals."

But for the past year, Cooper has increasingly been vocal about his position on state issues, something the NCGOP and other detractors are already making hay out of.

Since becoming an "assumed" candidate, Cooper has staked out liberal positions that critics say run counter to his job and has openly challenged the state's official position on a number of issues including:

Other issues where Cooper has taken a position contrary to the state include Voter ID and redistricting.

But Cooper earned some accolades from many on the right for his refusal to retry a Charlotte police officer who shot and killed an unarmed black man, after the jury returned a split verdict. Expect that to come up in the Democratic primary. Cooper's opponent, Ken Spaulding, offered a firm rebuke to Cooper's decision.

Monday morning, Spaulding said in a statement that "this will be a meaningful primary"

"The primary voters will have a choice between Roy Cooper, the status quo and the establishment's hand picked career politician who through his office has sided in court with the Republicans against the voting rights of all North Carolinians, and a candidate in me, who will never take the voters for granted and who is willing to work hard for the people's respect and support," Spaulding went on to say in a statement.

Still, with PPP's poll showing 49 percent of voters with no opinion of Cooper, David McLennan says he has an opportunity to break out. "Now," said McLennan, "he's got to not only talk about who he is but also what he stands for." 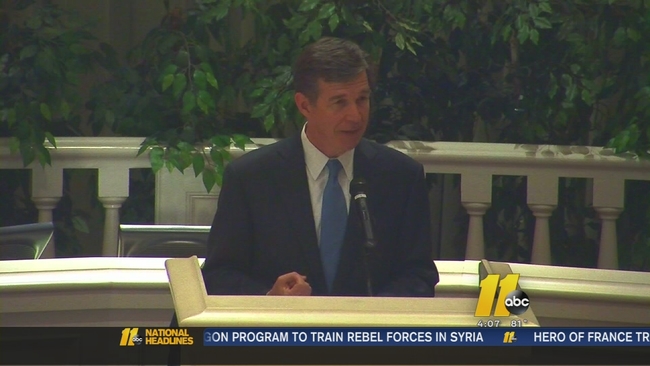