Gov. Cooper expects to lift most COVID-19 restrictions -- except masks -- by June 1 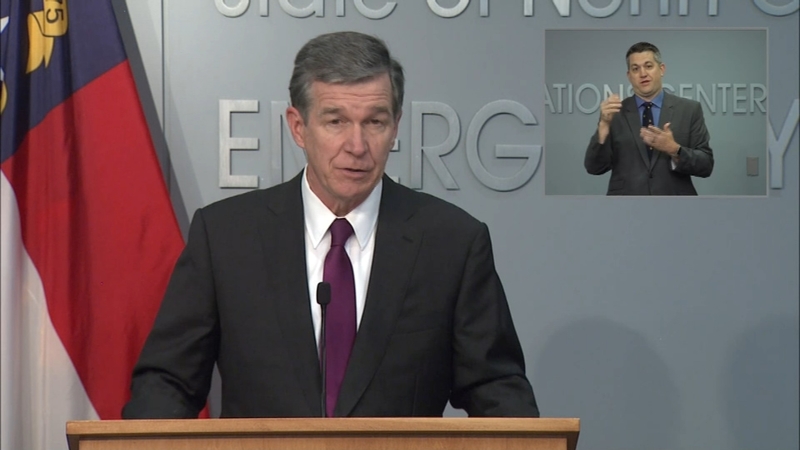 NEWS CONFERENCE: Cooper expects to lift most restrictions, except masks, by June 1

Governor Roy Cooper on Wednesday indicated the state is on track to have almost all capacity and social distancing restrictions lifted by June 1.

With the nation about to mark its 200 millionth vaccination, the Tar Heel State itself opened up vaccinations to all residents 16 and over earlier this month, and the campaign appears to be working.

"North Carolina's strong safety protocols and actions to slow the spread are why we've been able to avoid a surge in cases overwhelming our hospitals," Cooper said. "Our careful, reasoned approach has worked, striking the right balance."

Face coverings, however, will still be required. However, Cooper said once two-thirds of adults have received at least one dose, the state can begin to loosen mask mandates as well.

"Each shot in an arm is a step to putting this pandemic in the rearview mirror," Cooper said.

NCDHHS Secretary Dr. Mandy Cohen added that while requirements would lift in most places, high-risk settings and establishments that cater to children under 16, who cannot get the vaccine, will have additional recommended safety protocols.

"Until enough of us are protected by the vaccine, we need to keep protecting each other," Cohen said.


Cooper plans to issue an Executive Order next week outlining safety restrictions for the month of May.
The North Carolina Bar and Tavern Association at the time said it "celebrates the governor's decision."

Retail stores, salons, museums, and aquariums are a few of the businesses that have already been allowed to resume full capacity. However, physical distancing measures remained in place inside those establishments.

If all goes according to plan, six feet markers won't apply anymore.

Music venues like the Pour House in Raleigh have been hit hard by the pandemic, but with the Governor's most recent announcement, they hope to make a comeback.

Music venues like the Pour House in Raleigh have been hit hard by the pandemic, but with the Governor's most recent announcement, they hope to make a comeback.

"With live music and promotion and all that fun stuff that goes along with it, it takes some time. So you're not going to see all the music venues on June 1st open up with these crazy awesome bands that people are excited about," said Adam Lindstaedt, the owner of the Pour House.

The venue is currently operating at 19 percent, a limit that is surely hurting guests' experience.

"Our shows are way shorter so people are in and out in an hour, hour and a half tops," Lindstaedt said. "They're not having the ability to stick around for four or five hours all night long, Just hang out and chat with friends and see several bands. It's a very different scenario."

Not only that, the pandemic also affected the talent buying market; Glenn Boothe, a talent buyer for Motorco in Durham said no one wants to be the one to find out that their show won't sell.

"If they're gonna travel all the way to Durham, North Carolina -- from whatever they're promoting, whichever city they played by before, you know -- they do need to make sure that they're covering their cost and making sure it's going to be worth a while," Boothe said.
Report a correction or typo
Related topics:
politicsnccoronavirusroy coopercovid 19 pandemiccovid 19
Copyright © 2021 WTVD-TV. All Rights Reserved.
CORONAVIRUS
LATEST: J&J vaccine 'very likely' should've been 2 doses, Fauci says
Lawsuits demand unproven drug for COVID-19 patients
Robert Durst hospitalized with COVID-19, his lawyer says
NC State Fair: Everything to know before you go
TOP STORIES
5 killed when SUV struck bridge near Capital Boulevard were all teens
Citing GenX, EPA announces strategy to combat chemical contamination
Body of man recovered from Falls Lake, Durham deputies say
Wake County commissioners adopt non-discrimination ordinance
Community mourns Knightdale officer killed while responding to crash
NC paramedic reels in 500-pound hammerhead shark
Show More
This Raleigh church has been supporting gay rights since the 1950s
NHL suspends Sharks' Evander Kane for violating COVID-19 protocols
Rep. David Price will finish his term but not seek reelection
Troopers keeping close eye on school buses, school zones this week
Man wanted in killing of pregnant 911 dispatcher turns himself in
More TOP STORIES News