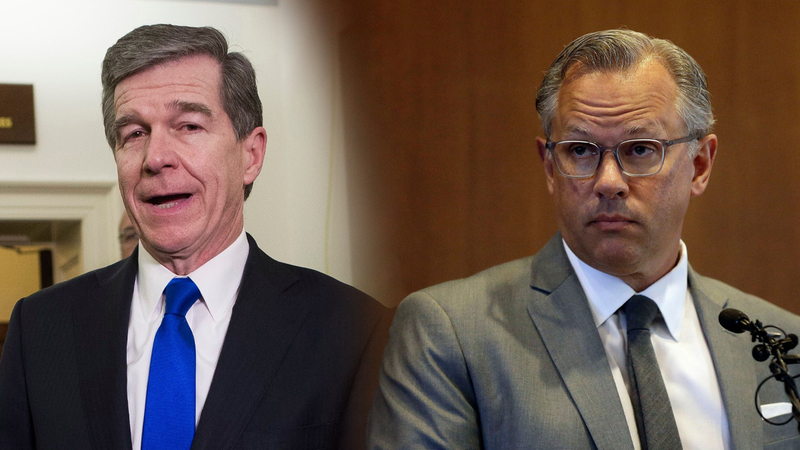 RALEIGH, N.C. (WTVD) -- It was a North Carolina governor's debate like we haven't seen before with no audience and plexiglass separating the candidates. And the first 30 minutes were spent debating COVID-19 and the state's response.

The debate comes as the state has seen an uptick in coronavirus cases and hospitalizations after transitioning to a Phase 3 reopening.

Gov. Roy Cooper, who largely disposed of his typical calm and reserved public persona, arrived as the aggressor -- blasting his challenger, Lt. Gov. Dan Forest, for flouting the state's coronavirus restrictions on the campaign trail.

It was a North Carolina governor's debate like we haven't seen before with no audience and plexiglass separating the candidates. And the first 30 minutes were spent debating COVID-19 and the state's response.

"The last eight months, including last night, Dan Forest has been having in-person events with no masks or social distancing. That's reckless," Cooper said. "It endangers North Carolinians including the staff in this room."

With most statewide polling showing Forest trailing Cooper in the polls, the lieutenant governor held his own on stage. The first and only gubernatorial debate was his best chance at giving North Carolina voters the chance to envision him as the state's next chief executive. He pushed back against claims he was weak on COVID-19.

"I'm not personally against people (wearing masks) at all. I've never said that. In fact, I've always said it should be a personal choice," Forest said. "It doesn't need to be a governor mandate. We don't need a governor that treats us like 5-year-olds."

Forest pledged again to repeal the state's mask mandate and painted Cooper's pandemic-response as the source of the pandemic's economic pain.

"We need to make sure we can do two things at once in America," Forest said. "We can protect the most vulnerable and we can allow the healthy folks to get back to their livelihoods."

Cooper responded, "Now, you're not just ignoring science -- you're ignoring common sense. You cannot wish the pandemic away!"

Forest's campaign to ascend to the Executive Mansion has focused largely on his criticism of the shutdowns tied to the coronavirus.

Cooper argued he relied only on data and science to make "tough decisions" that ultimately saved lives. At one point in the debate, he told Forest, "you complain about the economy but you won't do the simple things you need to do to fix it. And that's slow the spread of this virus."

The governor defended his phased approach to school reopenings while his challenger insisted local districts need more power to reopen on their own.

And when the debate turned to the months of racial unrest, peaceful protests and riots -- the candidates were asked, do they believe systemic racism is a problem?

"No, I don't think there is systemic racism," Forest said. "There is racism. And we should reject it at every single turn."

Cooper said, "We need to listen to people who lift up their voices for equality and justice. But we cannot tolerate violence and destruction."

"There was a lot of substance on both sides. And I think viewers got a sense of how the two candidates differ," said NC State Economics Professor, Dr. Michael Walden - one of the night's four panelists.

The governor's race is likely to set the pace for Democrats in the South, as Democratic presidential nominee Joe Biden could benefit from a Cooper victory.

Roy Cooper and Dan Forest participated Wednesday in the lone gubernatorial debate of 2020. After the debate, Steve and Tisha hosted a panel of experts to discuss what happened.