Vote 2020: Here's what you need to know about the candidates for NC lieutenant governor 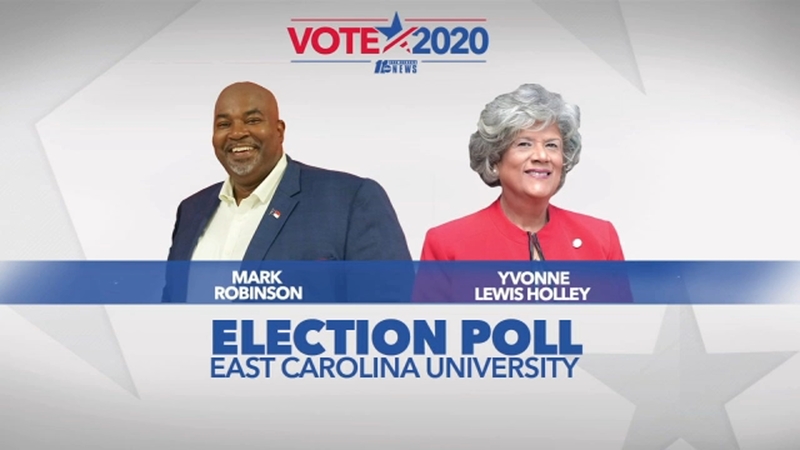 Republican Mark Robinson, a factory worker, husband and grandfather is running on a conservative platform. His challenger, Yvonne Holley, is a mother and four-term state representative for Raleigh's District 38.

Both candidates, if elected, would make history as the first Black person to hold the title in North Carolina. Holley would be the second woman to do so. A East Carolina University election poll shows the two are tied among likely voters.


ABC 11's Tim Pulliam asked both candidates about their platforms and what it would mean to be the first Black lieutenant governor for North Carolina.

Republican Mark Robinson, a factory worker, husband and grandfather is running on a conservative platform.

Supporters of school choice say it provides alternatives to public school to give parents a choice in their child's education. However, opponents say it will undermine the traditional public school program and could lead to segregation of schools.

"I honestly don't believe that will happen. I think the opposite will happen," Robinson said in response to the critique.

Robinson disapproves of Democratic Gov. Roy Cooper's handling of the COVID-19 pandemic. The 52-year-old Greensboro-native publicly supported reopen rallies across the state and said Cooper's COVID-19 response should have been more focused on congregate living settings, like nursing homes.

"If Walmart could come up with ways to keep businesses safe, if Lowe's, I certainly believe any small business or coffee shop could have done the exact same thing," Robinson said. "As disturbing as COVID 19 was, it should have made us wake up and realize some of our senior citizens live in absolutely deplorable conditions."

Robinson is a gun rights activist and is anti-abortion. He also supports providing law enforcement with additional funds.

He does not believe in systemic racism--despite research showing it exists.
"Most of the statistics that I've read when I go back and look at the author of those things we found out that they have political leanings either to the right or to the left," Robinson said.

When asked how she feels about the posibility of being the first Black person elected to the office of lieutenant governor, Holley said, "It gives me a sense of pride. It also gives me a sense of despair. it's been so long and we're still having first. if it encourages young people and young women and girls to get out there and do some things that they normally wouldn't have done than is worth it."

Holley added that she feels her experience will guide her in the role.

"I see it as an extension of what I've been doing already all my life."

She added that she would like to add more professionals into schools to assist with child development.

Holley commended Gov. Roy Cooper on his response to the pandemic.

"I want to back him up," Holley said. 'The man has been phenomenal, but he's also been really bogged down with COVID and hurricanes and tornadoes. So he can use some help and I want to help him as much as I can."

Holley wants to use the position to fight for gun legislation, women's abortion rights, affordable housing and food security.

"Changes need to be made. In some instances, some police forces definitely need to be more funded, some agencies they don't."

The messages include him calling First Lady Michelle Obama a man and comparing Black Democrats to antebellum slaves.

Robinson denied that the posts were offensive.

"You know people may see it as offensive," Robinson said. "But I don't think they are anymore offensive than the things I've seen written about conservative people, about our current president, about our police officers. People who know me know that I don't have anything against homosexual people. I don't have anything against Jewish people. The only thing I can tell them is this when I get into office, I will not be representing Mark Robinson. I will be representing people of NC. And that is all the people of NC."

But Holley said she did not agree with the tone of the posts.

"I am personally offended by the tone of them. I'm embarrassed for him. I wanna say, 'Bless his heart.'"

"LGBTQ folks know all too well the ways that divisive and antagonistic words shape our lives and experiences. Over the last several years, we've seen an epidemic of violence against transgender women of color across the South and a spike in anti-LGBTQ hate crimes, fueled by people in power who spew hate very similar to Mark Robinson's words. LGBTQ North Carolinians deserve elected officials who respect their lives and identities, not politicians who attack them for simply being who they are."

Both candidates said they would be able to work with a governor in the opposite party, if elected.