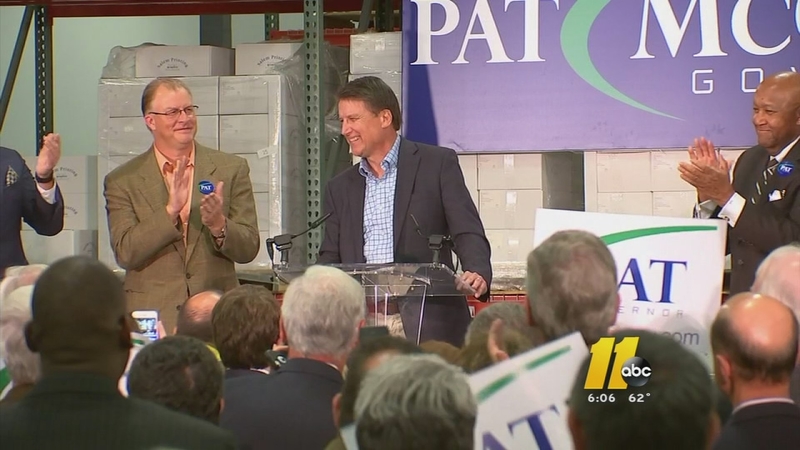 KERNERSVILLE, NC (WTVD) -- Governor Pat McCrory made his bid for a second term in office official Wednesday, formally announcing his bid for re-election at a business in Kernersville, NC.

Tuesday, McCrory released a web video and tweeted: "I'm running for governor because our comeback story isn't over. There's still more to do to rebuild NC."

He built on that theme Wednesday, first touting what he described as an historic three years in office.

"Some say we can do better," the Governor told the crowd of about 200 supporters. "But the results show this: nobody has ever done it better than this administration and this success story in the history of North Carolina."

But McCrory also spoke of things he still wants to accomplish, running down a list that looked a lot like issues he campaigned on four years ago including infrastructure, education, energy creation, job creation, government efficiency, mental health, and additionally "protection of our general public and state borders."

The Governor said he has three basic principles he tries to follow.

"Two, we must walk the line between continuing our economic prosperity and growth while also protecting quality of life and environment which brought many of us here and why we call North Carolina our home. I love this state."

"Three, our number one responsibility is this, to implement a vision and strategy to prepare state for next generation."

McCrory and Cooper have been running head to head in recent polls with neither taking a meaningful lead.

Wednesday, Democrats wasted no time criticizing. Before the Governor even made his announcement, Ford Porter, a spokesperson for the NC Democratic Party said, "Governor McCrory begins his re-election campaign facing at least two federal corruption investigations into his administration and 28 straight months of underwater poll numbers. By Governor McCrory's own admission, it's 'very, very serious' when the FBI investigates a governor - so it's telling that he is dodging questions on the matter and won't even admit if he's retained outside counsel. The bottom line is that Pat McCrory just hasn't been straight with middle class families and taxpayers. That's why voters are ready for a change."

Still, supporters in the crowd listening to the Governor Wednesday ate up his message.

"Small business is the backbone of America," said Reggie Reid, with the Republican Leadership Initiative. "That's where the jobs are going to come from and I think it's a good idea for the state to invest in that and encourage that."

"I was just impressed by the reality that he's actually made changes," chimed in Diane Conterno-Neese. She works at Salem One, where McCrory made the announcement and was delighted by what she heard. "So often politicians talk about it and they talk about it again, but they don't actually implement the changes and he has."