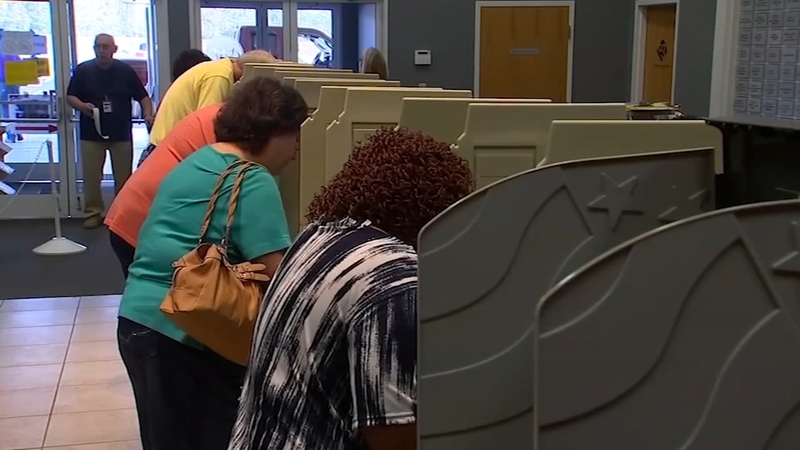 U.S. District Judge Loretta Biggs released her written order Tuesday, granting an injunction against Gov. Roy Cooper, North Carolina State Board of Elections Chair Robert Cordle, North Carolina State Board of Elections Secretary Stella Anderson, and board members Kenneth Raymond, Jefferson Carmon III and David Black. According to the injunction, the defendants cannot implement the new voter-ID requirements and must stop any communications to the public that say a photo ID will be required for all 2020 elections.

Election officials also have to work with local media and voter-education groups to inform voters that they will not need photo ID this election.

Several North Carolina chapters of the NAACP filed the lawsuit the day after the voting ID requirement became law in December 2018.

MORE: Ruling from federal judge, dropped hours before 2020, effectively negates the #VoterID *law* passed by @NCGOP at the end of 2018 right before new @NCLeg was sworn in without @NCGOP veto-proof majorities. It does NOT negate the amendment passed by voters. @ABC11_WTVD #ncpol pic.twitter.com/UiabDApx9x

In her decision, Biggs said an injunction would be in the public interest, adding, "Electoral integrity is enhanced, not diminished, when all eligible voters are allowed to exercise their right to vote free from interference and burden unnecessarily imposed by others."
Biggs also recognized the history discrimination in North Carolina.

"No one disputes that North Carolina 'has a long history of race discrimination generally and race-based vote suppression in particular,'" she wrote, quoting another court case.

The order outlines a brief history of voter ID laws in North Carolina and the legal challenges to those laws.

For 2020, Judge Loretta C. Biggs, an @BarackObama appointee, is ordering an immediate stop to all @NCSBE mailings & communications that were preparing voters for #VoterID. Law can’t be implemented for March #supertuesday primary & maybe even Nov. @ABCPolitics @ABC11_WTVD #ncpol pic.twitter.com/tgqbw8Om3t

The new court order means that voters will not need a photo ID in the March 3 primary elections.

A spokesperson for State Senator Phil Berger released the following statement about Biggs' decision Tuesday evening:
"It is absolutely ridiculous that the judge would accuse the bill sponsors - including an African American Democrat - of being racist. The voters saw the need for voter ID and approved the constitutional amendment. The legislature, acting on the will of the people, enacted one of the broadest voter ID laws in the nation. Now this lawsuit, and last-minute ruling, have sowed additional discord and confusion about the voting process. The judge prohibited the legislature from defending the law it wrote. The only parties the judge allowed to defend the law are Governor Roy Cooper's administration and Attorney General Josh Stein, both of whom oppose voter ID. As legislative leaders have said before, Attorney General Stein must appeal and move to stay this decision immediately, so the state can continue to move forward with the implementation of voter ID."

Reverend Dr. Anthony Spearman, president of the North Carolina NAACP released the following statement Tuesday evening:
"The Federal Court made it crystal clear that racial discrimination will not stand in North Carolina in its decision today to intervene to halt this illegal photo voter ID impediment-the latest bad faith attempt in a string of failed efforts by the NC General Assembly to place hurdles in the path of the right to vote of African Americans and Latinos in this state, and to diminish the force of the true will of the people. This decision ensures that every eligible voter who participates in March 2020 should have their ballot counted free from this discrimination. We encourage every voter to use your voice and your ballot. When we fight, when we vote, when we stand up together, we win!"
Report a correction or typo
Related topics:
politicsraleighncvoting2020 presidential electionelection
Copyright © 2021 WTVD-TV. All Rights Reserved.
TOP STORIES
Dueling petitions fuel mask debate in Wake County schools
Ammunition shelves bare as US gun sales continue to soar
Do I need to get tested for COVID-19 if I'm vaccinated?
Family decries controversial arrest of Texas teen
Durham officer shoots dog after it attacks woman, police say
Titanic wreckage 'rapidly' deteriorating, researchers say
Show More
24-year-old killed in drive-by shooting on US 70 in Garner: Police
NCCU is back on the football field after missing out on last season
Durham church offering backpacks and school supplies to families
Florida new national epicenter after record number of new COVID cases
LATEST: NC eviction moratorium set to expire July 31
More TOP STORIES News